Whatever happened to Gush Katif's Judaica? 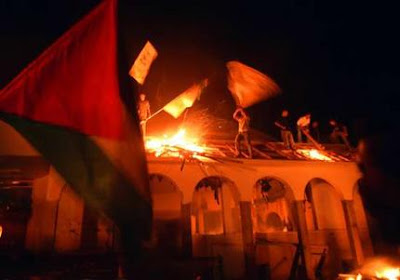 For me to look upon the pictures of the books, I felt as if those books were taking on the substance of the synagogues that held them--destroyed, desecrated, forgotten. 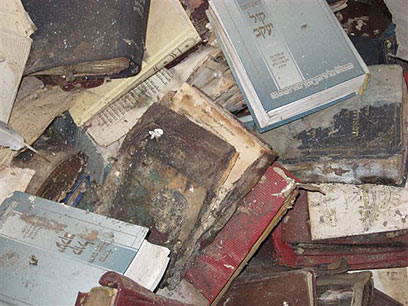 This coming August will mark three years since the Gaza pullout and after the long endurance of temporary residence and continued unemployment, yet another chapter is added in the list of neglect towards the area's uprooted residents.

In the past few days, the former Gaza inhabitants discovered their belongings, mostly Holy Scriptures and additional materials that were packed at the various community synagogues and stored at a Ministry of Religious Affairs’ warehouse at Moshav Givati near Ashdod, have been severely damaged. Some of the Judaica was completely ruined and some was cast on the floor covered in mold and dust.

Aviel Tucker, a Netzer Hazani evacuee and presently a resident of the caravan site at Kibbutz Ein Tzurim told Ynet that since the disengagement, community members have been looking for their synagogue’s contents including furniture, Judaica and Holy Scriptures.

The SELA Administration for Assistance to Settlers from the Gaza Strip and Northern Samaria referred Tucker and his friends to the Ministry of Religious Affairs, which referred them to the person in charge of storage. He referred them to the storehouse on Kibbutz Givati, which was leased out to hold the contents of evacuated Gaza community synagogues.

'We are not youngsters on an outpost'
At first, Tucker and his friends took the furniture to their current residence’s temporary synagogue, paying for the movers themselves, without any assistance from any governmental body.

Later, when they asked to return to the storehouse, the owner prevented them from entering it, claiming that the Ministry of Religious Affairs breached his contract and was no longer paying for the warehouse.

For over a year, Netzer Hazani communities were forced to make do with the equipment given to them by the Ministry of Religious Affairs for the synagogue located at Ein Tzurim; which included no more than a few prayer and Pentateuch books, and simple chairs.

As things stand now, the dispute with the warehouse owner has yet to be resolved, access has not been arranged and the essential equipment is stuck on Moshav Givati.

Desecrated Pentateuch-filled crates
“We are a bunch of kids at an outpost on some hill, who can make do with the bare essentials,” said Tucker, “We are adults, a part of a respected community that invested a lot of money over the years, and suddenly we don’t even have one book to peruse at our synagogue. It's been three years already.”

'No one to talk to'
Only recently were the evacuees permitted to enter the warehouse in order to gather the rest of their belongings; at which time they met a terrible sight: “We arrived there and saw a huge hangar in which podiums, arks, memorial boards, prayer books, Torahs and Holy Scriptures were thrown together,” said Tucker. “Most of the equipment was destroyed and whatever was intact was covered in dust, mud and garbage.”

Memory plaque
A member of a different community who arrived at the storage site said, “I don’t want to know how this desecration of Holy Scriptures and Judaica would be perceived if it occurred in another place or in Europe.”

The residents, he added, have no intentions of turning to any of the authorities dealing with their situation for assistance. “We're giving up in advance. It's just a waste of time and energy. We invested so much in building our lives anew, and in the basic things like a place to live and work and that isn’t working either. It is simply impossible. There is no one to talk to.”

The Sela Administration stated in response that the treatment of the synagogue’s contents is the Ministry of Religious Affairs’ responsibility. The latter was unavailable for comment.
Posted by Unknown at 9:42 AM