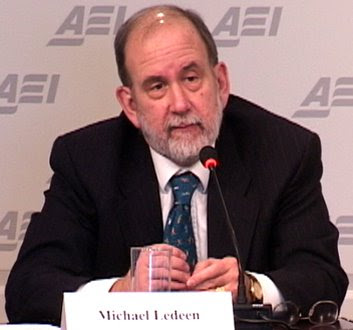 Recent news of the Bush administration making diplomatic overtures to Iran –– including possibly opening a consular station in Tehran –– shocked many conservatives.

Historian Michael Ladeen was not one of them.

“It’s a professional compulsion,” says the fellow at the conservative American Enterprise Institute. “Diplomats want diplomatic contact in diplomatic buildings. If you think of the State Department as a business, its products are treaties, embassies and consulates.”

Sardonic wit aside, Ladeen is a controversial voice on geopolitical matters, especially regarding terrorism and Islamic fundamentalism.

To his detractors from the Daily Kos set, Ladeen is a paleoconservative warmonger, largely because he has long supported aggressive responses to enemies of Israel and the United States.

He once said in a speech to an American Enterprise Institute gathering in the early ’90s, “Every 10 years or so, the United States needs to pick up some small crappy little country and throw it against the wall just to show the world we mean business.”

Ladeen, 66, asserts his views have been misrepresented.

“I have always been violently opposed to military action in Iran,” he said last week while in San Francisco for a lecture sponsored by the Republican Jewish Coalition. “Iran is a country tailor-made for nonviolent democratic revolution. It’s ready to go. In Iran you have 70 to 90 percent who hate the regime, love America and want to live in peace with their neighbors.”

Not that he wants to go easy on Iran’s radical Shiite regime, which has run the country since 1979. If there’s pressure to be applied, Ladeen wants the West to press harder.

“I’ve spent my adult life studying evil –– fascism, communism, terrorism,” he says, “and if there’s one thing I learned, [it’s that] when someone stands up, pounds his chest and says ‘I’m gonna kill you all,’ take him seriously. He means it. When they drag 100,000 people into the streets and chant ‘Death to America,’ I think it means they want to kill us.”

That study of evil began in earnest with the L.A. native’s graduate studies in modern European history and fascism.

“Like every other Jew my age, my immediate ancestors had a terrible time in the first part of the 20th century, and I wanted to understand why,” he says. “Why didn’t anyone do anything about it? Why did the Jews get on the cattle cars? These are the questions that drove me to be a historian in the first place.”

Ladeen served in the Reagan administration as a special adviser to then-Secretary of State Alexander Haig and later as a consultant to National Security Adviser Robert McFarlane. Ladeen later was accused of complicity in the forged Italian documents that claimed Saddam Hussein sought nuclear materials from Niger –– a claim that served as a pretext for the Iraq war.

Ladeen denies the charge, claiming he was against invasion. However, writing in the conservative National Journal in 2002 before the Iraq war, Ladeen said of the Middle East, “One can only hope we turn the region into a cauldron and faster, please.”

Still, he minimizes his impact on events.

“You’ll hear about me [that] I can talk to [the president] anytime I want to, where as in reality I only met Bush once in a long line at a Chanukah party,” he says. “People live in a fantasy world where they think there are secret people out there with enormous power in the shadows.”

As for Iran, which is fast becoming a nuclear player, Ladeen sees a big problem looming for Israel and the West.

“Iran will keep after us until they win or are defeated,” he says. “But I think we can defeat them politically. Everyone says we either talk or bomb, but that’s not true.

“There’s at least one other option: Support revolution. It’s fun and it’s not hard, and it’s what America should do.”

Meanwhile, lest anyone accuse Ladeen of being a chickenhawk, he is quick to note that his three children currently serve with the Marines. One son twice deployed to Iraq, another recently graduated from officer candidate school, and his daughter works in the Pentagon.

How does it feel to have his kids potentially in harm’s way as they defend their country?