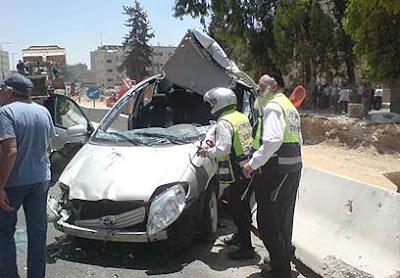 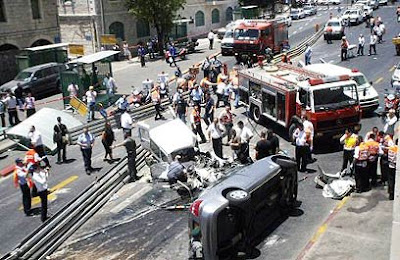 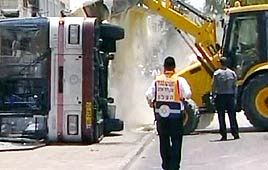 Three women were killed and at least 30 more people were injured when a bulldozer driven by a Palestinian resident of east Jerusalem trampled over pedestrians and vehicles and plowed into two buses in downtown Jerusalem at around noon Wednesday.

The driver, who reportedly had a criminal record and was the holder of an Israeli (blue) identification card, was shot and killed by a SWAT officer near the old Shaare Zedek Medical Center. The terrorist was identified as 31-year-old Hossam Dawiath from the village of Tzur Baher.

The terrorist continued on his killing spree, but a short while later a soldier and a SWAT officer jumped on top of the vehicle. The officer then shot the terrorist in the chest and leg and killed him.

Jerusalem Police Chief Aharon Franco told Channel 2 "a tractor driven by a terrorist began hitting vehicles and flipped over two buses. Apparently there are casualties at the scene; we don’t have an exact number as of yet. We received no prior warning of a possible attack."

Police Commissioner Dudi Cohen praised the officers who shot the terrorist: "They demonstrated great determination in striving to make contact with him… the traffic officer fired at him and another officer climbed the tractor. A civilian and a SWAT officers fired at him as well. They were all very brave."

Egged official Yossi Klachkes told Yet, "Two of our bus lines - 13 and 60 - were rammed by the bulldozer as they were traveling toward the Mahaneh Yehuda Market. The line 13 bus was carrying 35 passengers and the other bus had 15 people on board. The drives and some passengers were inured of suffered from shock and were evacuated to hospitals."

One of the women injured in the attack, Miki Aharonson, said, "I was trying to enter a parking lot when the bulldozer's driver signaled me to move back. I moved my car, and then he began ramming into it over and over.

"There were people there but no one attempted to rescue me or stop him," she said.

Asaf Nadav, the driver of the line 13 bus also recounted the horrific attack. "I was in a traffic jam on Jaffa Street and I suddenly saw hoards of people running toward the bus and then continuing toward the market. Then I saw the bulldozer heading in my direction; it gave me a little nudge. I opened the window to yell at the driver, but then he turned the bulldozer in its place, lifted the bus up and flipped it over.

"He slammed into the bus a few more times then continued on his way. I was knocked back to other side of the bus and then climbed out the window. A female officer then shattered another window and began pulling the passengers out of the bus," he said.

The driver was lightly injured in the attack.

Bat-El Ganem, 22, a passenger on bus line 13, said the bulldozer "rammed into the bus again and again. Two babies flew towards me; I was in shock. I don’t know how I made it out alive. We flipped over until a wall stopped us."

Zion Shetreet, who witnessed the attack, told Ynet that the "tractor turned into the road very suddenly and started trampling over the cars standing in the stoplight. I started yelling for people to shoot him. I saw a security officer running out of a nearby building and aiming an Uzi at him.

"The tractor was heading in the direction the Mahaneh Yehuda Market," he added. "This is something you only see in the movies. It was awful."

According to Abraham Scheinberg, a ZAKA volunteer, the bulldozer was being used in the construction of the Jerusalem light tram.

Following the attack, police announced they would be increasing deployment across Israel, focusing on crowded places, checkpoints and crossings.

According to an assessment by the Gaza Strip organizations, as well as by sources in the Palestinian Authority, the Jerusalem attack was an independent act carried out by the driver alone; However, a Hamas spokesman said Wednesday that the Jerusalem attack was "a natural reaction to Israel's aggression," adding the group did not know who was behind the attack.

The Islamic Jihad issued a statement praising Wednesday's attack:"The attack is a clear message to the enemy from the person who carried it out and the entire Palestinian people, that it should expect more attacks for as long as it continues its crimes against the Palestinian people and the aggression against our people, our land and our places."

Several emergency hotlines have been set following the attack: