No Thanks, Sarkozy! We Don't Need the UN at Shaba Farms 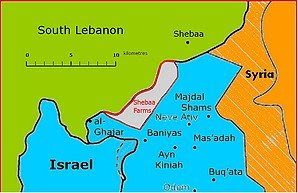 No thank you Mr. "Split Jerusalem" Sarkozy, we have already seen what it means when the UN is a "caretaker" of a particular area. It means that terrorists run rampant. Isn't this why 1701 is falling apart as Hizbullah rearms on our border?

The LAST thing we want is for the UN to "caretake" another inch of land.

Four days before European and Mediterranean leaders meet for a summit in Paris, Israeli defense and diplomatic officials warned on Thursday against a new initiative that calls on Jerusalem to hand over the Mount Dov/Shaba Farms area to the United Nations.

The proposal is reportedly the brainchild of French President Nicolas Sarkozy, who will host a meeting Sunday of the newly-formed Mediterranean Union to be attended by Prime Minister Ehud Olmert, Syrian President Bashar Assad, Lebanese President Michel Suleiman and other regional leaders.

This idea is a "complete nonstarter," one Israeli diplomatic official said. "It is not at all relevant."

"The Shaba Farms are of vital strategic importance for Israel and therefore have security significance. Handing the land over to the UN means that Hizbullah will be there," a top defense official told The Jerusalem Post on Thursday.

Mount Dov - 20 square kilometers of mountains on the northeast border - was conquered by Israel from Syria during the Six Day War. Israel says the land belongs to Syria, while Hizbullah claims it belongs to Lebanon. Syria and Lebanon have not resolved the issue between them.

The new initiative calls on Israel to relinquish the land to the UN, which would serve as a caretaker until the dispute over the identity of its true owner is solved.

The idea to hand over the land to the UN was reportedly raised during meetings Sarkozy held with the newly-elected Suleiman during a visit to Beirut early last month. The thinking behind the initiative is that by relinquishing the land Israel will erase Hizbullah's excuse to use force, namely, returning the Shaba Farms to Lebanon.

In addition, it is thought that this could bolster US-backed Lebanese Prime Minister Fuad Saniora.

US Secretary of State Condoleezza Rice, during a surprise visit to Lebanon in mid-June, told Saniora the US "believes the time has come" to deal with the issue.

The Israeli defense official rejected the claim that giving up the area would bolster Saniora and deprive Hizbullah of its raison d'être, saying that after an Israeli withdrawal from the area, Hizbullah would simply find a new excuse for its existence.

As if proving this point, a senior Shi'ite religious leader was quoted in the Hizbullah-linked Al-Akhbar newspaper this week as saying that Hizbullah should liberate former Shi'ite villages now in northern Israel.

According to the report, Sheikh Abdel al-Amir Kiblan said the villages "must return to their owners, to our country and our people." The villages include the present day Israeli communities of Margaliot, Yuval and Yiron.

The defense official said the security establishment's recommendation to the political echelon was to relinquish the land only as part of a comprehensive peace deal either with Syria or with Lebanon.

Israel's position, according to diplomatic officials, is that it completely pulled out of Lebanon when it withdrew its troops in 2000, something the UN also attested to. If Lebanon believes the area is theirs, and not Syria's, then Israel was willing to talk about it with Beirut in direct negotiations.

Olmert told visiting Italian Foreign Minister Franco Frattini on Tuesday that Israel was interested in direct talks with Lebanon on all matters of contention, including the Mount Dov/Shaba Farms issue.

In an interview with the Nazareth-based Al-Sinnara, meanwhile, Olmert said he had "no regrets" about having launched the Second Lebanon War. "It's clear to everybody that [Hizbullah chief Sheikh Hassan] Nasrallah is "scared to death" of further conflict with Israel, he said. for the arabs that have never been attended to and have been turned, for political purposes, against Israel at every turn (not to mention the horrible conditions the arabs have to live under for this purpose).
Posted by Unknown at 6:14 AM