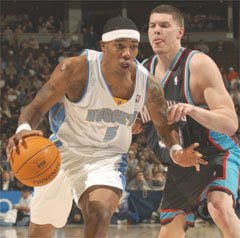 Maccabi Tel Aviv strengthened its front-court on Sunday with the signing of Rodney White.

The 28-year-old American (2.06 meters), who has signed a two-year contract, was selected No. 9 in the 2001 NBA draft by the Detroit Pistons, but after four mediocre seasons in the US moved to Europe and in the last year played in the Chinese and Puerto-Rican leagues.

"I'm happy and proud to be back on basketball's big stage," White said. "I'm hungry for success and I can't wait to show the Maccabi supporters what I know."

White, who was named national freshman of the year by ESPN after averaging 18.7 points and 6.5 rebounds at University of North Carolina at Charlotte in his one season of collegiate basketball, didn't settle in at Motor City in his first year in the NBA and was traded to the Denver Nuggets after just one season in which he averaged only 3.5 points per game.

Two-and-a-half relatively successful seasons in Colorado were cut short midway through the 2004-05 season when he was shipped to the Golden State Warriors.

After just 16 games in California, White left to try his luck in Europe. All in all, White averaged 7.1 points and 2.2 rebounds in 218 NBA games.

In the 2005/06 season White starred at Basquet Manresa (20.8 ppg, 6.6 rpg) in Spain and in the following season played a couple of months at Lagun Aro Bilbao before leaving for Italian side Scavolini Pesaro (17.2 ppg, 6.3 rpg).

White, who is known as a very physical and offensive minded player, played for China's Zhejiang Guangsha last season (30.5 ppg, 8.7 rpg) and helped Arecibo Captains to the Costa-Rican championship this summer.

One player who is leaving Maccabi is David Bluthenthal, who signed for French club Le Mans last week. Bluthenthal, who is coming off a poor season at the Nokia Arena, will return to Tel Aviv next season after Le Mans was drawn with Maccabi in Group B of the Euroleague.

Guard Will Bynum is also expected to leave the club in the coming weeks for Italian club Virtus Bologna, which added Hapoel Jerusalem's Jamie Arnold to its roster over the weekend.

Arnold moved to Jerusalem last summer after scoring the winning basket for Tel Aviv in the BSL championship game a few weeks earlier.
Posted by Unknown at 7:58 AM