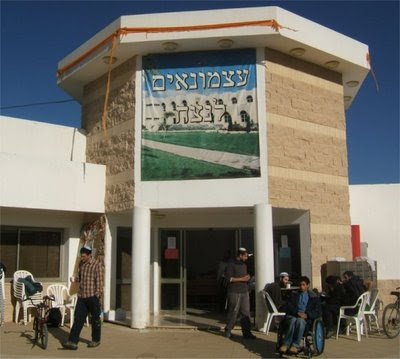 One puts their money where their heart is.

Where is the heart of "Palestine"?

One of the most visible conflicts in public opinion prior to the Gaza Strip pullout in August 2005 dealt with the issue of public structures following the evacuation of settlers from Gush Katif and the northern West Bank.

Many asserted that the buildings must be destroyed in order to ensure that they would not be used by terrorist organizations in the future. The fate of many of the area’s synagogues was also discussed at that time.

In July 2004 the government had already reached the decision to disengage Gaza and to demolish the public buildings there, without exception.

Time and again, the government bombarded the High Court of Justice explaining why the judges must not be permitted to interfere in the decision to demolish the synagogues.

However, at some point, the tables were turned. Then-Defense Minister Shaul Mofaz, Silvan Shalom, Binyamin Ben-Eliezer and Matan Vilnai suddenly opposed the decision. The ministers started raising creative ideas to allow the synagogues to stay standing.

The final decision was received in September 2005, following the residents’ evacuation and a day before the IDF’s definitive pullout from the Gaza Strip.

Despite the objection, the government decided to leave public buildings, kindergartens, libraries, schools and other structures whole for the benefit of the Palestinian population. The synagogues were left untouched due to the problematic nature of demolishing holy places.

Recently, terrorist organizations and most notably, Hamas have begun using these buildings for training purposes.

Gunmen use synagogue as training grounds
Several videos filmed and produced by various terror organizations present gunmen training at the sites of public buildings once used in Gush Katif, including synagogues and schools.

One of the structures identifiable in the short films in the Atzmona synagogue in which the terrorists train for different scenarios with live ammunition.

Aside from Hamas, the Islamic Jihad also trains at the Jewish holy site.

The buildings serve as scenery for kidnapping scenarios and urban warfare including the invasion and “purification” of buildings. The organizations’ members also practice Krav Maga.

The drills are conducted in and outside of the buildings and damage is visible to the structures. The gunmen practice various maneuvers using light weaponry and grenades, light and heavy machine guns and antitank missiles.

The mere existence of the buildings and their accessibility greatly contribute to the terrorist organizations.

The structures are abandoned and isolated and far from the Palestinian civilian population.

If not for these buildings, the terrorists would have to construct buildings and special training areas for these purposes, just like the IDF does in order to conduct counter-terrorism drills.

They would have to evacuate an entire neighborhood from its Palestinians inhabitants in order to establish a similar area.

In order to understand the great benefits Hamas attained by using the deserted structures left by Israel, it is necessary to simply watch the documentation of the drill one of the terrorist groups conducted in their new, ready-made urban warfare camp whose walls were built solely with sandbags.

It should be noted that usage of the buildings Israel abandoned in the Gaza Strip for live ammunition training is not secure. Buildings designated for urban warfare training must be planned and built especially for that purpose.

However, it is possible that the terror organizations have already made the proper modifications themselves.