OLMERT??? The UJC Thinks Olmert Can Intervene in Conversion Crisis??? Have They Lost Their Collective Minds? 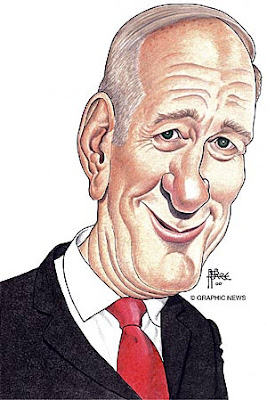 I agree that this is one of the most important issues of our time, and that it has divided Jews like nothing I have ever seen. I agree something should be done. But what are they thinking? OLMERT????? The UJC must be crazy!

There is only one thing that could make this whole issue worse, and that is having Olmert stick his wildly unpopular nose into this. If we had a PM who had even a tiny inkling of a religious knowledge, who was somewhat popular, or who commanded more than a sneer from the general public, maybe that PM could have something to say—but a very limited something.

As it is, this issue is a standoff between the penguins and the crocheted-kippah crowd, and neither one is backing down.

Strangely enough, if someone would just look into the history of the issue, they would see that when the Rabbinate was first established, the Haredim refused to have anything to do with the Chief Rabbinate's election and maintained that they had their own independent rabbinical courts and wished to maintain that independence. It was agreed that they could.

This is a delicate issue that would only be made impossible by any intervention by Olmert. G-d Forbid!

The United Jewish Communities, the federations of North America (UJC) sent a letter to Prime Minister Ehud Olmert in which they request his personal involvement in finding a solution for the current conversion crisis.

The letter, signed by Chairman of the UJC’s Board of Trustees, Joseph Kanfer and President Howard M. Rieger was sent in light of the Rabbinic Court’s announcement that it intends on disqualifying thousands of conversions of people from the former Soviet Union which were carried out under Rabbi Chaim Drukman.

Integration
Drukman is the head of a special conversion campaign whose goal is to accelerate and simplify the conversion process.

The letter stated that “few crises have so divided Israel from the North American Jewish community. Your leadership on this issue would reinforce the historic notion that the Israeli government is both representative of its citizens and the Jewish people.”

Jews around the world in general and those in North America specifically led the struggle in favor of aliyah of former USSR Jewry during the communist regime.

Since the beginning of the 90s, when the “gates were opened” these communities transferred millions of dollars to Israel in order to subsidize the aliyah and absorption of one million Jews from the former Soviet Union, some of who were obliged to undergo conversion in Israel.

The heads of the Jewish communities in the US are of the opinion that the strict stance of the Rabbinic Court will deter many people from beginning the conversion process.

Senior Vice-President and UJC Israel Director-General Nachman Shai said that “the issue of conversion is a central topic on the agenda of North America’s Jewish communities and they are following this issue with great concern.

"We hope that the prime minister’s personal treatment of the issue will help in solving the dispute and this will promote the conversion process.”
Posted by Unknown at 4:30 AM