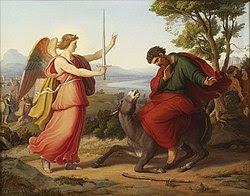 “Lo, it is a people that shall dwell alone, and shall not be reckoned among the nations.”

Bil’am is hired to curse Israel—but instead he showers blessings on the Israelites. Among his statements is the above-quoted phrase that has generally been understood to mean that Israel is fated to be alone, isolated from other nations.  Yet, if this is what the verse means—it doesn’t seem to be much of a blessing. Rather, it would be condemning Israel to permanent outsider status. It encourages Israel to self-pity and to righteous indignation; it becomes a self-fulfilling prophecy that can lead to a deep alienation and malaise.

Some have suggested that “outsider status” is indeed a blessing.  The outsider constantly prods the world to higher achievements; the outsider has a deeper, more spiritual existence than the “boring insiders”.

Rabbi J. H. Hertz cites an interpretation by Marcus Jastrow that translates the verse as follows: Israel is a people that dwells alone; it does not conspire against the nations. Israel  minds its own business, and doesn’t hurt anyone; therefore, the nations should leave Israel alone.

I would like to offer another interpretation of this blessing, but first will present some data. Jews constitute about 1⁄4 of a percent of the world’s population. We are—and seem always to have been—a numerically small group of people. Yet, this tiniest of nations has given the world the Bible and has profoundly shaped the course of human civilization. Our prophets and psalmists have inspired billions of people for thousands of  years.

Between 1901 and 2005, 22% of all Nobel Prize winners have been of Jewish ancestry. 37% of American Nobel prize winners have been Jews. Jews represent 37% of the recipients of the United States national medal  of Science and 25% of those receiving the Kyoto Prize for contributions in science, technology and the arts.

The State of Israel, with less than 1/1000 of the world’s population, produces more scientific papers per capita than any other nation in the world, and has one of the highest per capita rates of patents filed.
Israel’s economy is larger than all of its immediate neighbors combined.  Israel has the highest average living standards in the Middle East. Relative to  its population, Israel is the largest immigrant-absorbing nation on earth. Israel has more museums per capita than any other country. The average date palm in the Middle East produces about 38 pounds of dates per year; Israeli date  palms are now yielding 400 pounds of dates per year.

Israel’s advances in agriculture, technology, industry, military equipment, and medicine are absolutely amazing, and far out of proportion to what could be expected from such a tiny country that is constantly beleaguered by its enemies.

One would think that the world would be enormously grateful to the Jewish people, and would do everything possible to encourage and aid the Jewish State.  Considering how much the Jews have given—and continue to give—to the advancement of human civilization, one would think that Jews would be the most popular and appreciated group on earth.

Astoundingly, this isn’t so! The nations of the world gladly benefit from Jewish contributions, but do not necessarily show affection  or understanding for Jews and the Jewish State. Perhaps this stems from jealousy, religious fanaticism, age-old anti-Semitic stereotypes. Perhaps this stems from the psychological need to transfer blame on others, rather than accept responsibility for oneself.  It is so much easier to scapegoat the Jews (or any other minority) for all the problems of society and the world.

So now let us return to the blessing that Bil’am gave to the people of Israel. I would translate the phrase as follows: Israel is a people that dwells in uniqueness, and is not appreciated by the nations.

Israel is incredibly unique. This has been proven to be a historical fact, and not simply an empty oratorical flourish.  The people of Israel, in spite of tiny numbers, have contributed enormously to all aspects of the advance of human civilization—far out of proportion to anything that could have been expected. Israel lives as an amazingly unique people.

Yet, Israel is not appreciated by the nations. This also has been proven to be a historical fact. For an assortment of reasons, humanity has not fully appreciated all that the people of Israel have given—and continue to give—to the world.

It is a blessing to be unique and to contribute uniquely to humanity. But is it a blessing to be unappreciated—and even ill-treated?
Being unappreciated is a natural corollary to being unique. The price one pays for being successful is often the incurring of jealousy and hatred from those who are frustrated with themselves.  The higher one rises, the more resentment may be aimed in his/her direction.

Bil’am blesses Israel: you will be a unique and amazing people; your very success will incur the resentment and frustration of the nations. Don’t expect to be appreciated. Do your best. Make your contributions to human civilization without expecting a thank you. That is your mission, and that is your blessing. Israel is destined for greatness, not mediocrity.

The ideal is achieved not by dragging Israel down, but by raising the rest of humanity. Israel must set the tone for human excellence. In spite of our many flaws and shortcomings, we are unique in our numerous contributions to humanity. Our messianic ideal is that all human beings will strive for greatness, for spiritual growth, for compassion and world peace.  Israel is unique, unappreciated—and hopeful.

***Please share the Angel for Shabbat column with family and friends. Please visit  www.jewishideas.org
Posted by Unknown at 7:03 AM