"No one can seriously doubt that Hamas has genocidal intentions." 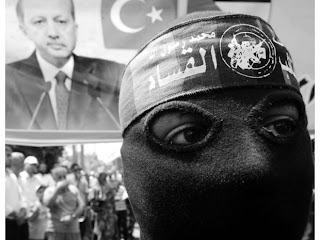 B"H
Wow.  This is one of the most concise, accurate, and chilling pieces I have seen.
In it, Clifford May lays out exactly what Hamas wants from Israel, and exactly what those who support Hamas are supporting:  Genocide.
M
-----
Beyond Bigotry
Clifford May, Scripps Howard News Service
http://www.nationalpost.com/todays-paper/Beyond+Bigotry/3150541/story.html#ixzz0qqbgxN1G

Israel is at war, and if Israel were to be defeated, much of the world would not shed wet tears. What would happen after such a defeat? No one can seriously doubt that Hamas has genocidal intentions.

Abdallah Jarbu, Hamas's Deputy Minister of Religion, recently asserted that Jews "want to present themselves to the world as if they have rights, but, in fact, they are foreign bacteria -- a microbe unparalleled in the world." Jarbu then offered this prayer: "May He annihilate this filthy people who have neither religion nor conscience."


Jarbu is restating what Hamas's Iranian sponsors have been saying for years. Kayhan, the newspaper that speaks for Iranian Supreme Leader Ali Khamenei, recently called Israel a "cancerous tumor" that must be excised from "the Islamic Middle East." The goal, Kayhan added, must be Israel's "total annihilation from the political geography of the region."

Let's stipulate that not all those who support the Gaza "Freedom Flotilla" would welcome a second Holocaust. But let's acknowledge, too, that those who do not endorse genocide feel it unnecessary to distance themselves from those who do.

The American journalist Helen Thomas was videotaped last week saying that Israelis should return to "Germany and Poland." What was shocking here was not Thomas's anti-Semitism (long well known) but that she was echoing, with just a tad more subtlety, the message radioed last week from the flotilla's Turkish flagship to the Israelis: "Shut up, go back to Auschwitz." There also was this pro-terrorism message: "We're helping Arabs go against the U.S., don't forget 9/11."

Despite such evidence, most media have been reporting that those aboard the flotilla were on a "humanitarian mission," attempting to deliver needed aid. Few have mentioned that Palestinians already are the largest per capita recipients of foreign aid in the world. Israel itself delivers as much as 15,000 tons of aid to Gazans every week. More comes from the U.S. and Europe via the United Nations, which has a massive relief operation in Gaza -- to which the Turks have contributed but a pittance, as my colleague Claudia Rosett has pointed out.
A Washington Post reporter in Gaza last week noted that "grocery stores are stocked wall-to-wall with everything from fresh Israeli yogurts and hummus to Cocoa Puffs. Pharmacies look as well-supplied as a typical Rite Aid in the United States."

The reporter added, however, that Gaza has become "a mini-welfare state." That indicates that what is needed is not relief but development -- not shiploads of free food but paying jobs. And that, in turn, requires investment in factories, businesses and agriculture. Gaza lacks such investment because it is ruled by Hamas, which, again, is at war with Israel.

One of the flotilla's organizers, Greta Berlin, a 68-year-old American with a background in theatre and communications, was candid enough to acknowledge that the flotilla's primary purpose was not to deliver aid but to stop Israel from inspecting cargo heading for Gaza. Israel does that in order to reduce the number of missiles, explosives and other weapons Hamas receives. In other words, Berlin wants to increase Hamas's ability to wage war against Israel -- knowing that more Israelis and more Palestinians will be killed as a result. "War is peace," George Orwell wrote in 1984. In 2010, war activists are peace activists. Actually, it's worse: Even arms smugglers are peace activists -- so long as they are smuggling arms to be used to murder Israelis.

Ah, but the root cause of this conflict is Israeli "occupation," isn't it? Except that the conflict began long before Egypt, Jordan and Israel's other Arab neighbours launched a war intended to wipe Israel off the map in 1967. That led to Israel taking Gaza from Egypt and the West Bank from Jordan. Never in history had these "Palestinian territories" been ruled by Palestinian Arabs.

Five years ago, Israel withdrew from Gaza -- every soldier and farmer, leaving behind only productive greenhouses, which Gazans soon destroyed. Had they not done so, Gazans could now be exporting food rather than importing missiles.

Note, too, that on the West Bank, where Israel's security forces work quietly with those of the Palestinian Authority, the economy is booming. At 7%, its annual economic growth rate is among the highest in the world.

Do such facts matter? The fever of anti-Israelism seems to be rising too fast to be reduced by the cold compress of truth. Jewhatred is increasingly acceptable, even fashionable, not just in the Middle East but in Europe and in some of America's finer salons--and journals and blogs. And now, apparently, interest in a "final solution" -- to borrow Hitler's apt phrase--is emerging as well. Helen Thomas's sudden retirement is unlikely to significantly slow that trend.

The quaint idea that, having learned the lessons of the Holocaust, civilized people would "never again" tolerate genocide has become a cruel joke -- one repeated in Cambodia, Kurdistan, Rwanda, the Balkans, Darfur and beyond.