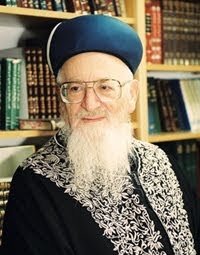 NEW  YORK, NY (June 7, 2010) - The State of Israel lost a powerful  voice of political reason and religious rationality on  June 7, 2010 (7 Sivan 5770) when Hakham Mordehai  Eliyahu,  former Chief Sephardic Rabbi of Israel, succumbed to advancing  health problems he had been suffering for the past two  years.

Hakham  Mordehai Eliyahu served as Chief Sephardic Rabbi  of Israel  from 1982 to 1993 and was member of the Bet Din Harabani  Hagadol (Supreme Rabbinical Court) based in Jerusalem.  He was considered one of the leading Zionist rabbis and  certainly one of the most popular and charismatic rabbinical  leaders in all of Israel for many decades.

The  rabbi was born in the ‘Old City’ of Jerusalem  in British-occupied Palestine during the dark year of  1929 when Arabs attacked, killed and maimed over  100 Jews  throughout Hebron, Jaffa, Safed and other towns.  A consequence  of these sad events was an increased growth in Jewish  nationalism and intensification of Jewish self-determination  for Jews all over the holy land.Hakham  Eliyahu's upbringing was one imbibed with a rigorous love  of the land of Israel which helped him become a staunch  defender of such, first inspired by his father, the Iraqi-born  rabbi, Hakham Salman Eliyahu (1878-1940). His father was  not only considered a respected rabbi and mekubal   (kabbalist) of Jerusalem, but he also had been secularly  educated in London. As a result of his Western education,  he later served as personal secretary of the British High  Commissioner of the Palestine British Mandate, Lord Herbert  L. Samuel (1870-1963) -- the first Jew to govern  the historic  land of Israel in 2,000 years.


Hakham  Mordehai Eliyahu's early religious education was  conducted  by his father, who died when he was still a young boy.  The young man continued to study under the prominent Syrian-born  rabbi, Hakham Ezra Attia (1885-1970), the head of the  Porat Yosef Yeshiva in Jerusalem, as well as Askkenazi  rabbis such as Avraham Karelitz (1878-1953), author of  the well know book, 'Hazon Ish.' His commitment to the  Torah was displayed when as a youth, the young Mordehai  joined an underground group that struggled for a  Torah-directed  government in Israel and was involved in at least one  attempt at pressuring the government by means that were  considered, by some, to be illegal. Mordehai would later  graduate with honors from the Institute of Rabbis and  Religious Judges, under the direction of (former  Sephardic  Chief Rabbi) Hakham Yishak Nissim (1896-1981). Mordehai  later was elected as the youngest person in Israel to  ever hold the post of dayan (Judge).

The  rabbi continued as a dayan in the religious court of Beer  Sheva for four years before transferring to Jerusalem  where he was elected to the Supreme Religious Court. In  Beer Sheva, people learned of his good grace and  outgoing  manners that were coupled with his vast knowledge of the  Torah. The general public grew to trust him as a  reliable  source to solve problems and answer intricate questions.  Soon after, he was elected as Rishon LeSion,  Chief  Sephardic Rabbi of Israel. As with the previous Sephardic  chief rabbis, Mordehai was inaugurated into the rabbinate  in a ceremony held at the famous Rabbi Yohanan Ben Zakai  (Kal Grande) synagogue in the Old City of  Jerusalem.  Immediately he became known as an eminent poseq (decider)  of Jewish legal issues and his conduct added prestige  to the office of the Chief Rabbi.

In  the religious world, Hakham Mordehai Eliyahu worked for  the preservation of the tradition of his father,  the Iraqi  Jewish nusah (rite) and the opinions of Hakham  Yosef Hayyim, author of the book Ben Ish Hai. Mordehai  Eliyahu did not desire a uniform "Israeli Sephardi"  rite based on the Shulkhan Aruh (Code of Jewish  Law), as other Sephardic rabbis have called for.  His opinions  were his own, and they were elaborated in a siddur (prayer  book) known as Kol Eliyahu.

Hakham  Eliyahu authored several books on Jewish religious law  and interpretations of the law, some which remain very  popular. In his person-to-person conduct, the rabbi was  often swamped by people from all walks of life, who wanted  to get a blessing or seek his advice. In recent years,  his capacity as a kabbalist became more public, but he  discouraged any reference to this aspect of his Torah  knowledge or practice.

As  chief rabbi, he sought to give the non-religious  public  a better understanding of Jewish traditions and the importance  of the Torah. He lectured at secular communities  and kibbutzim,  as well as non-religious public schools. He also  traveled  extensively throughout the world, teaching Jewish communities  the importance of fighting assimilation, increase Shabbat  observance, educating children, observing family  purity  and the need to immigrate to Israel.

The  rabbi was a much sought after expert for his knowledge  of Torah and halakha (Jewish law), and for his  great piety. His best testimonial remains; it can be seen  by the intense love that people of all backgrounds have  for him. The rabbi grew up firmly planted with a  love  of all Jewish people, secular and religious, and  the desire  for those people to live free-and-be free in their own  land. Fearless, he developed into one of the most frank  and honest rabbinical leaders of Israel, a man not scared  to issue statements which reflected his passionate religious  values in reference to international political events.

After  the attacks by Arab terrorists against the United States  on September 11, 2001, the rabbi essentially called for  President Bush to take up arms against Arab terrorist  enemies, not just issue empty words:


My  heartfelt sorrow at the immense tragedy that has been  perpetrated upon the American people by wicked  evildoers,  so utterly devoid of conscience and compassion, that  it is difficult for the lips to utter and words are  simply inadequate to express…I would also like   to extend from Jerusalem heartiest condolences  to the  bereaved families in their hour of grief. "May no  further sorrow befall you." (Jeremiah 31:12).  And for those who have been injured may 'The Almighty  send them His message of healing and relief.' (Psalms  107:20)…I would like to offer you my praise and  my support for your plan to convene a world alliance  of nations to work together to fight terror  --  not only  in words but also in deeds.

The  rabbi remained well known for his outspoken position on  the Israeli government's decision to give land away to  the Palestinian Arabs. When he stepped down from  his formal  position, he became automatically the accepted rabbinic  leader of the Religious Zionist camp in Israel and abroad.  He fought against the Oslo Agreements to such an  extent,  that the Attorney General saw fit to warn him that as  a civil servant, he could not be perceived as supporting  opposition to government policies.


He  was one of the very few senior rabbinic personalities  who joined the inhabitants of Gush Qatif in a day of fasting  and prayer against their uprooting and expulsion. He could  not conceive that any Jewish government in its right mind  could undertake such a dastardly operation against Jews.  Addressing the many thousands of people in the town square  of Neve Dekalim, he exclaimed, "It cannot and will  not happen" ("Hayo lo tihye")! After  this, he remained outspoken in his strong opposition to  the dismantling of Jewish villages in Judea and Samaria.

Outraged  after seeing the terror attacks that originated from Gaza  which killed and maimed hundreds of Israeli citizens,  the rabbi wrote a letter to President George W. Bush who  was arriving in Israel on his first official visit in  January of 2008. Hakham Mordehai Eliyahu desired  to make  sure the President was aware of the popular public opinion  which does not call for wanting to establish a larger  Palestinian self-governing area; he said:

The  rabbi was spiritual adviser and one of the strongest advocates  for Jonathan Pollard had. Pollard, a Jewish man serving  a life sentence in the U.S., remains a controversial figure  because his punishment has been widely regarded as being  excessive, solely for political reasons. Pollard  received  a life sentence for spying for an ally (Israel),  when  the maximum sentence today for such an offense is 10 years-and  the median sentence for such an offense is only 2  to 4  years.


Pollard  has spent 25 years in prison, 7 of which were in  solitary  confinement, in the harshest prison in the federal U.S.  system. On many occasions, Hakham Mordehai Eliyahu has  visited Pollard in prison, and frequently wrote letters  and appeals on his behalf. Following heart surgery and  in his hospital bed, the rabbi wrote President Bush a  letter which was hand-delivered to him in Israel. This  letter reminded the President that Pollard has languished  in American prisons for over 20 years, he pleaded:

I  urge you to release Jonathan Pollard and to send him  home to Jerusalem…I would like to point out that  I am willing to act as Jonathan Pollard's guarantor,  to take him into my custody and to accept full  responsibility  for him. I have visited Jonathan in prison on numerous  occasions. He is a dignified man, a man of noble sensitivities  who is deserving of special consideration.

Hakham  Mordehai Eliyahu and his wife had four adult children.  Their daughter teaches at a religious school for  girls.  Their oldest son is a rabbi and attorney that works for  the Israeli government; their second son is the Chief  Rabbi of the city of Safed, and their youngest son is  the head of a religious school in Jerusalem. Hakham Eliyahu  was one of the voices of reason which remains severely  needed to continually counterbalance the growing  haredi  influence which has been encroaching upon the culture  of the office of the Chief Rabbi. The office that Hakham  Mordehai Eliyahu once held has morphed into something  it was never intended to be, one that forces its  opinion  based on a paradigm which at one time existed only within  the haredi world, and was never part of Torah observant  classical Judaism.

Hakham  Mordehai Eliyahu will forever be remembered as a  shining  example of a man who loved and respected the land of Israel,  and a man who understood how Jews could live both as part  of the modern world and yet remain loyal to the Torah.

Shelomo   Alfassa is a scholar of Sephardic Jewry and  coordinates Special Projects for the American Sephardi  Federation
Posted by Unknown at 10:35 AM