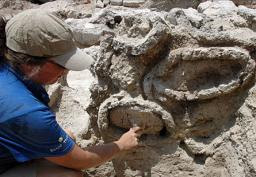 Here is more evidence that the phrase "land flowing with milk and honey" was not metaphor, it was reality.

It wasn't date honey, either.  It was honest-to-goodness bee honey.

This makes a lot of sense to me.  Honey was really important for sweetening everything in ancient times, it was also required for the production of many important commodities like beer.

The making of beer and bread were closely related.  Both required grain, both required yeast.  In the baking of bread, done on a daily basis, the yeast was often taken from barm, the foam or scum produced during fermentation.

In addition to the honey, there are a myriad of uses for beeswax, including ancient seals on documents, as stoppers and seals on jars for preserving food, and, of course, for candles, torches, and lanterns.

I know we are all accustomed to think that the ancients only used oil lanterns, but as anyone with a traditional hannukiah that uses oil can tell you, the oil can easily go rancid, it is difficult to maintain, and it is difficult to transport. Trying to walk with an oil lantern is a very difficult thing.
Archeologists credit the invention of a wicked candle to ancient Egypt (the wick was made from rushes, which grew in the rivers and streams).  It would make sense that we would have learned that technique as well.

Although Turkey is currently in the dog house for many Israelis because of its involvement in the violent Mavi Marmara flotilla incident, during biblical times the Israelites imported bees from Turkey for the industrial production of honey in the Beit She’an Valley, according to a new archeological discovery by  researchers from the Hebrew University of Jerusalem.

The team, headed by HU archeology Prof. Amihai Mazar, found a total of 30 intact hives in the ruins of the city of Tel Rehov, dating back to 900 BCE, as well as evidence that there had been 100-200 hives made of straw and unbaked clay.

Three millennia ago, the joint Israelite-Canaanite settlement had 2,000 residents.

The  hives, lined up in an orderly way, may be the earliest complete beehives  ever discovered and offer a glimpse of ancient beekeeping during biblical times.

The team of archeologists and biologists was surprised that bee remnants had been found in an urban setting.

The existence of cultivated bees in the center of the city was especially odd, as bees usually get angry when the hive is opened to remove honey, and could have stung residents.

After the conclusion of the dig in 2007, the bee remnants were sent by Mazar – who received the Israel Prize in archeology last year – to Prof. Guy Bloch, an expert in the behavior and evolution of bees in the university’s department of evolution, systematics and ecology.

Bloch  conducted a study in which he found clear evidence that the beehives were ancient and had turned into carbon due to the passage of millennia. Their external structure was very rigid, but remnants of bee larvae and pupae enveloped a soft body.

About 17 remnants of wings and dozens of legs were also found. The results of the study were published this month in the journal PNAS (Proceedings of the [UN] National Academy of Science).

With help from experts in Germany and Brazil, the researchers sought to identify the bee species. To their surprise, the bees were determined to have been different from the local Syrian species, which was prevalent in biblical times in the Land of Israel, Jordan, Lebanon and Syria. They were also different from Egyptian bees, which were in the South, and from the Persian bee, which was prevalent in the North and Northeast.

The HU researchers and their foreign colleagues concluded that the species found in the Beit She’an Valley was similar to the Anatalyan bee, found in central Turkey. Thus, the question became: How did these bees reach the Land of Israel? One possible explanation is that the distribution of bee varieties 3,000 years ago was different than it is today, even though the researchers found no scientific evidence of this. The other explanation is that the Tel Rehov beekeepers imported their bees from elsewhere in the Mediterranean basin.

Thus, it would have been difficult to keep them within a dense urban area. The  Anatalyan bee, which produces five to eight times more honey, is less aggressive, making it possible to raise them in an urban setting.

The Beit She’an Valley digs also showed evidence of widespread commerce with  lands in the eastern Mediterranean, as well as techniques for transferring bees in large pottery vases or portable hives. An Assyrian stamp from the 8th century BCE provided evidence that the bees had been brought 400 km. south from the Taurus Mountains in southern Turkey – a distance that was just slightly shorter than that between Taurus and Tel Rehov. Thus, the import of “docile” bees apparently was a solution for the beekeepers of the Land of Israel.

After attempts to raise local bees for the production of honey resulted in mass stinging, the Turkish bees were apparently the solution, Bloch said. He concluded that while it had long been believed that a “land flowing with  milk and honey” referred to date honey, the fact that there was a commercial-  sized honeybee industry in urban areas here showed the financial importance of  beekeeping during the biblical period.