Hey Israel! Get John Paintsil's Brother Out of Jail in Time for The World Cup Match! (We Could Use Some Positive PR Right Now!!!) 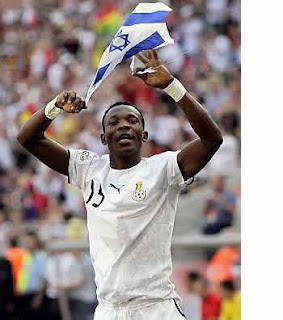 B"H
As the world's eyes turn to the USA vs. Ghana match in the World Cup game set for Saturday, 2:30 p.m. ET, those who love Israel will look kindly and happily for the Israeli-flag waving son of Ghana, John Paintsil.
Unfortunately, at the same moment that Paintsil is preparing for this huge match, his brother sits in an Israeli jail waiting for a decision on his asylum.
This is Israel's opportunity for some great PR.  Israel needs to move quickly to decide on John Paintsil's brother's asylum in time for him to watch the game with some of his friends in Israel.  It would make for some great TV coverage, and it would also play well in the print media.


I know it probably isn't technically a "legal move."  After all, some bureaucrat probably relishes the idea of dragging their feet on this case another few months, but it would be a brilliant PR move.
Otherwise, you can bet the media will be all over this "anti-Israel" story about John Paintsil's brother sitting in jail--especially the EU media, who loves to paint us in the darkest shades possible.
So, Peres, why don't you do ONE thing right and give this guy asylum right now.  It certainly can't hurt your public image (what could hurt an image as low as it could go?), and it might really help Israel's.
After all, in case you didn't notice, Israel--the fight for our survival is as much PR as it is anything else.  Let's not give our enemies a win on the World Cup stage--let's take that win for ourselves!
M
-----
Offside!
Israel-loving  Ghana World Cup star’s brother awaits asylum ruling in jail.
By RON FRIEDMAN
06/25/2010  02:33
http://www.jpost.com/Israel/Article.aspx?id=179488

While Ghanaian soccer player John Paintsil runs, kicks and slides on the world’s largest sports stage, his brother Mark sits in an Israeli jail cell waiting for his asylum claim to be heard by the authorities.

Four  years ago, during the World Cup hosted by Germany, Israelis experienced  a rare moment of football-related pride when they saw the Israeli flag being waved by a player following a victory. The player was Ghanaian national team member John Paintsil, who had previously appeared for Maccabi and Hapoel Tel Aviv and was given the flag by Israeli fans attending the game.

It was that incident, according to Mark Paintsil, that triggered his asylum request.

In an interview to Ynet this week, the younger Paintsil said that his brother’s action had incurred the wrath of people in Ghana who saw the waving of a foreign flag as an unpatriotic act. He said that as a result, Paintsil’s family had become the target of violent attacks and had been forced to flee the  country. Paintsil said the situation was so grave that his family was unable to even visit Ghana, out of fear they would be harmed.

After  being traded to the English football club Fulham, John Paintsil moved to London, where he now lives along with his parents and other siblings.  Despite the threats to his family, John Paintsil was called up for the 2010 World Cup in South Africa and participated in Ghana’s successful qualification for the final 16 round.

Mark Paintsil, eager to follow in his brother’s footsteps, arrived in Israel two years ago, aiming to play for one of the local teams. However, his plans were dashed when he was informed by the immigration authorities that in order  to stay and play he would have to return to Ghana and replace his tourist visa with a work visa sponsored by the team. According to Paintsil, return to Ghana was out of the question because of concern for  his welfare. After his tourist visa expired, he stayed on as an illegal  alien, and a month ago was arrested by the Oz foreign workers unit.

Last  week, during a routine visit to Givon prison, Yarden, a volunteer for the Migrant Workers Hotline, met with Paintsil and heard about his asylum claim.

“Mark told us that he was arrested for missing his asylum hearing. He said that he had been injured, and was unable to attend his hearing, but that he could not be sent back to Ghana because of the threats that awaited him there,” said the Migrant Workers Hotline Spokeswoman.

“We urge the Israeli authorities to allow him to complete asylum request  proceedings from outside of the prison walls.”

Population, Immigration and Borders Authority spokeswoman Sabin Hadad said that Paintsil only applied for asylum after he was arrested, and that the reason for his arrest was that he overstayed his tourist visa in violation of the law.

“Paintsil was arrested based on the Citizenship and Entry into Israel Law, and only after his arrest he appealed for political asylum,” said Hadad. “His case is currently under review.”
Posted by Unknown at 5:48 AM