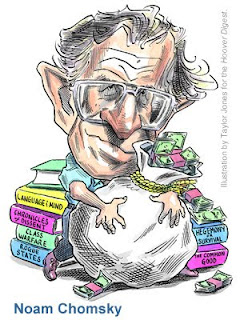 Good for Israel!  It is about time!!

But this isn’t enough.

This bozo needs to be barred from every academic institution, conference, and/or presentation that he could possibly attend.  He has gone completely crazy, seriously.

He seems to believe because he came up with one particularly well accepted (but not by me) linguistic theory, that he has become a god or something.  His ego has gotten completely out of hand, and now he thinks that whatever he thinks is what should be thought by everyone.

Also, he seems to have lost all connection with time.

Hey, Noam!  Sorry to break this to you, but the 60s are over, you are out of touch, and your linguistic theories are passe!

Chomsky,  a leading linguist, was scheduled to speak at Bir Zeit University near Ramallah. He reportedly spoke on the phone with an activist in an NGO called Right of Entry and said that his passport had been stamped with the words “entry denied.” He said that when he asked Israeli authorities  for the reasons for the decision to block his entry, he was told that it would be sent in writing to the US embassy.

Chomsky  has described his views as 'anarchist' and has been a proponent of ultra-leftist politics since the 1960s, when he opposed US involvement in the Viet Nam war.

In a recent interview with Democracy Now, Chomsky appeared to justify the development of nuclear weapons by Iran:

Israel  actually is sending the nuclear submarines and other warships through the Suez Canal, with the tacit agreement of Egypt, the Egyptian dictatorship, another US client in the region. Well, those are all threats—constant, verbal, actual.

And the threats do have the effect of inducing Iran to develop a deterrent. Whether they’re doing it  or not, I don’t know. Maybe they are. But if they are, the reason, as I  think almost all serious analysts would agree, is not because they intend to use nuclear weapons and missiles with nuclear weapons. If they  even loaded a missile was nuclear weapons, assuming they had them, the country would be vaporized in five minutes. And nobody believes that the ruling clerics, whatever one thinks about them, have a kind of a death wish and want to see the entire country and society and everything they own destroyed.

Chomsky visited Lebanon in 2006 and was hosted by Hizbullah. He stated that at the time that  “Hizbullah's insistence on keeping its arms is justified... I think [Hizbullah leader  Sheik Hassan] Nasrallah has a reasoned argument and [a] persuasive argument that they [the arms] should be in the hands of Hizbullah as a deterrent to potential aggression, and there is [sic] plenty of background reasons for that.”

One month after his visit, Hizbullah launched an attack against the IDF, sparking the Second Lebanon War.   (IsraelNationalNews.com)
Posted by Unknown at 11:40 AM