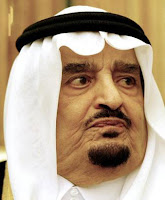 B"H
Wow.  Seriously?  The Saudis are involved in terror?  They fund Al Queda?
I thought they were just a bunch of rich guys who like to walk around in dresses!
I'm shocked!  (NOT)
(By the way, can you call something "secret" when the whole world already knows it?)
The scariest part of this story is the fact that even the Saudis aren't denying it.  Instead, they are trying to arrest the people who leaked the document.
OK, so when is the next official Saudi delegation expected in Washington?  Which of our "representatives" have taken money from them, and can we charge those representatives under the laws against material support of terrorism?
(Psssst.  Hey,  Hillary! You might want to do a little house-cleaning soon! [Wink, wink, nudge, nudge.])
M

An Iraqi news agency has revealed more evidence linking Saudi Arabia with terror. The Buratha news service published what it said it is a secret document disclosing how much money the Saudi kingdom has transferred to Al-Qaeda in Iraq. The kingdom reportedly sends explosives and weapons to terrorist groups in Iraq.

It was published shortly after former Saudi  army officer Abdullah al-Qahtani was arrested in Iraq over charges of planning a terrorist attack during the upcoming FIFA World Cup in South Africa.

The Saudi kingdom publicly condemns terror but frequently has been accused of financing terrorists and terrorism. It also has been charged with direct  involvement in the September 11, 2001 attacks on the World Trade Center  Twin Towers in New York and the Pentagon in Washington, D.C. A third airliner aimed at the White House crashed instead in a field in Pennsylvania after passengers, knowing they were doomed, rushed their terrorist captors and sent the plane into a nosedive a scant few miles short of its target. Fifteen of the 19 hijackers in the multiple aerial attacks were Saudis.

A report two years ago by the Times of London dubbed Saudi Arabia as a “hub of world terror” and reported that the kingdom “supplies the cash and the killers.” Two sons of the Saudi ruling family have been killed fighting for Al-Qaeda.

Despite  Saudi Arabia's friendly connections with the United States and other Western countries, Stuart Levey, the U.S.  Treasury official in charge of tracking terror financing, was quoted by the Times as saying, “If I could somehow snap my fingers and cut off the funding from  one country, it would be Saudi Arabia.”

NBC previously  has reported that approximately 55 percent of foreign terrorist fighters  in Iraq are from Saudi Arabia.

He cited Palestinian Authority documents captured by IDF forces that detailed allocations of funds for terror by the International Islamic Relief Organization, whose board of directors is headed by Saudi cabinet members.  (IsraelNationalNews.com)