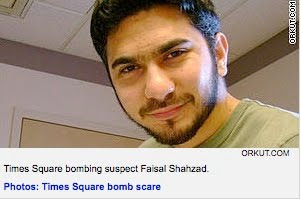 Bomb  suspect busted at JFK
Pakistani  US citizen 'trying to flee US'
http://www.nypost.com/p/news/local/bomb_suspect_busted_at_jfk_YcdVR3kBSvjTciTXytWRKI

By MURRAY WEISS, DAN MANGAN and TIM PERONE in NY and S.A. MILLER in DC


A Connecticut man who recently spent several months in his native  Pakistan was arrested at Kennedy Airport early this morning in connection with the attempted Times Square car bombing, law-enforcement sources told The Post.

Faisal Shahzad, 30, was trying to flee the United States and was headed for Dubai when he was apprehended by federal customs agents, the sources said.


Shahzad last week purchased the 1993 Nissan Pathfinder used in the would-be attack, the sources said, noting that an e-mail sent from his account had been used to contact the seller.

Meanwhile,  FBI agents searched the home at a known address for Shahzad in Bridgeport, Conn., early today. Special Agent Kimberly Mertz said the feds had a court ordered search warrant on the three story clapboard house, but wouldn't provide details except to confirm the search was related to the failed bomb plot.

Mertz wouldn't confirm of this was Shazad's address, but neighbors who were shown a facebook photo of Shazad recognized him as the owner of the house. He'd been renovating for the past 8 months or so -- though he didn't live there, neighbors said.

He had recently returned from five months in Pakistan, where his wife lives, The Associated Press reported.

Shahzad, a naturalized US citizen, had not been seen at his home or at his job since the Times Square incident.

Federal charges of conspiracy to use a weapon of mass destruction were pending.

Shahzad is believed to be only one of several people involved in the plot, and authorities are trying to determine if he has ties to foreign groups
Posted by Unknown at 8:30 AM