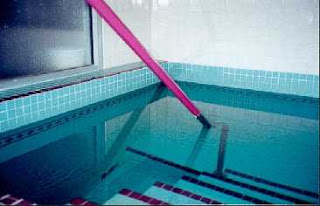 The Cote St. Luc Mikvah is apparently the only mikvah in Montreal dedicated to women's use, and it is in grave condition.

Because this is just another example of how chumrot is quickly replacing halacha in so many of our Jewish communities.

Because the men are following their chumrot, they are making it difficult for women to fulfill the halachic requirement to immerse.

Why am I saying that women can't use a mikvah that men are using?

The answer is twofold:

(1) Men don't have to clean themselves as well as women do before immersing, and some men don't clean themselves at all!  They use the mikvah as a bathtub, and the mikvah becomes disgustingly dirty--to the point of women not being able to use it for fear that the body oils and other foreign substances in the water may limit the effectiveness of her mikvah (and because it is just gross!)

(2) Women cannot be seen before or after mikvah because mikvah is private and being seen by men going to or coming from the mikvah is not tzniut (and it is plain embarassing).  The fear of having to pass by, or being hurried to complete mikvah by men who might want to use the mikvah is enough reason for a woman to avoid that mikvah entirely.

I wish the rabbinate in Israel and the religious leaders in the diaspera would call for an end to this ridiculous male chumrot in an effort to protect the halachic requirements of women.

But I am not going to expect that any time soon.  It seems that any new stricture they can add, they will gleefully follow--forgetting, entirely, the Torah prohibition against adding to mitzvot.

MONTREAL  - Every day, about 30 women visit a modern brick building in Côte St. Luc for an unusual and cherished tradition.

There, on Kildare Rd. at the Mikvah Israel, the women immerse themselves in one of two ritual pools to carry out one of the 613 commandments strictly Orthodox Jews follow.

Most are there to establish "ritual purity," enabling the resumption of relations with their husbands following the end of menstruation, when sex is forbidden, and seven days of abstinence.

Others  use the mikvah for what have become customs. Converts to Judaism and brides take ceremonial dips in the mikvah and observant Jews render new dishes kosher by dipping them in mikvah waters.

Observant men also  use the mikvah before the Sabbath and Yom Kippur. Some use it on a daily basis.

Though there are others in Montreal, this one is the only functioning one dedicated to women, attracting Jews from west-end neighbourhoods and from Orthodox communities in Outremont.

However,  according to Annette Cohen-Dahan, the 29-year-old building is in dire need of repairs, and she is part of a committee trying to raise $550,000  to fix it.

Half of that amount is needed for rebuilding the two ritual pools, and the rest to upgrade preparation rooms and common areas, replace the roof and renovate ventilation and mechanical systems,  she told the Canadian Jewish News. Three estimates were received for repairs, and the lowest one was accepted, she said.

"If we don't fix it within the next six months, it will become 'non-kosher' and one of the pools will have to be shut down," she said. "Within about a year,  the second one will have the same problem." Observant Jews are enjoined  to follow the Rabbinic rules, or Halakhah, governing the immersion procedure and accompanying prayers. Dunking in a swimming pool is no substitute, she explained.

"The mikvah is all pure rain water, with tubes that collect the rain, which is then filtered," she said in an interview. "The only two ways for a woman to get herself purified is to immerse herself in the Mikvah, or in the ocean, after sundown." While  some might see the practice as archaic, Cohen-Dahan said, "we follow the Torah as it is written." It adds "something special to the marriage," she said.

Since its founding, Mikvah Israel's operations have been supervised by Rabbi Isaac Gurary of the Chabad-Lubavitch Hasidic movement.

There are several other ritual baths used mainly by men, linked to various synagogues.

Rabbi Moishe New immerses himself in the mikvah at the Montreal Torah Centre of the Lubavitch Hasidic Congregation in Hampstead where he is spiritual  leader.

"It's a mystical thing - the experience of rebirth, a kind of return to the womb, on one level, a temporary moment of nothingness on another level," he said. "One disappears and submerges and becomes one with the water, then emerges reborn." The ritual signals  "a new day, a new start in life, a new level of connection to God and to our fellow," New said.

For women, the ritual is tied to "renewal of the cycle" and "rebirth," as it is in conversions, he said.

There  are other ritual baths in Montreal, including one on Victoria Ave. run by the Rabbinat du Québec, and two on St. Urbain St. serving the Hasidic  community of Mile End and Outremont.

But because they are used on  the Sabbath and most major holidays, they have to be within walking distance for observant Jews - another reason why the one in Côte St. Luc  is important for area residents.