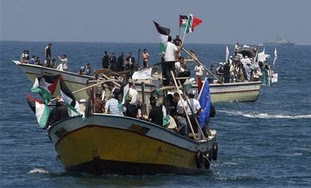 B"H
OK, let's look at the situation.
Over 1,000 "peace protesters" board ships from several different countries, and set sail to break the security perimeter that Israel has established around Gaza.
Why did Israel establish this perimeter?  Because Gaza was importing weapons in order to attack Israel.  Large ships full of weapons were pulling up to Gaza ports, or parking just off shore and either off-loading weapons into smaller ships for transport or dropping those weapons into the sea in watertight boxes for "fishermen" to pick up.
Israel was attacked over and over again by Hamas rockets, and those rockets were getting more and more sophisticated, able to reach further and further into Israel.  This is why Operation Cast Lead occurred.  Israel was being attacked.  It is still being attacked, but on a much smaller scale BECAUSE of the success of the security perimeter established by the IDF.  Without that perimeter, there would be an unstopping siege upon Israel by the terrorists.
OK, now these idiots say that there is a "blockade" of Gaza, and they are bringing "humanitarian aid" in.
Israel answers with offers to transfer that "humanitarian aid" to Gaza in a lawful manner, as they do not want the boats to enter the security perimeter.  The boats refuse.
Next, the sail closer.  The IDF warns them to stay back.  They say, "If you don't stay back, we will sink you!"
The "peace protesters" continue on--oh, but this time they have armed themselves with guns and knives to prevent an IDF assault.  They are planning violence against the IDF--and they have been planning it all along.  After all, those weapons were aboard those boats from the beginning!

OK, the IDF storms the boats (they could have sunk the boats, which would have been lawful under the circumstances, but instead, they put Israeli lives at risk in order to protect the safety of these "peace protesters.").  The "peace protesters" open fire and begin attacking with knives and spikes.
Now, the soldiers must protect their lives. They react, as soldiers will, and kill 15 "peace protesters" and wound 50 more.
Now, of course, every country in Europe and Turkey, who planned this whole provocation, are screaming that Israel is to blame.
We should be used to being hated and not worry about what the other countries have to say, seriously.   If we worry about what they have to say, we won't have a country!
They are not our friends, and they never were.
M
Rate this post
-----
Israel: Activists  on Gaza sail had weapons
Deputy Foreign Minister Daniel Ayalon holds press briefing several hours after IDF takes over flotilla headed to Strip, accuses fleet's organizers of having ties to Hamas, al-Qaeda
http://www.ynetnews.com/articles/0,7340,L-3896588,00.html
Ronen Medzini
Published 05.31.10, 11:24
Deputy Foreign Minister Daniel Ayalon said Monday morning that the pro-Palestinian activists on the flotilla sailing to the Gaza Strip had weapons on board. At least 15 people were killed in the raid and some 50 were injured. Six IDF soldiers were also hurt, two of them sustaining serious wounds.
In a first official Israeli response to the deadly Israel Defense Forces takeover
of the ships, Ayalon accused the sail's organizers of having ties to the Hamas
and al-Qaeda terror organizations.
"It was a provocation," Ayalon said during a press briefing. "On the deck we found weapons which were used against the forces. The organizers' intent was violent and the results were unfortunate.
"Israel regrets the loss of life. We called the organizers once and again the stop the provocations. We asked to transfer the aid in legitimate means. We promise that the aid will be transferred through the Red Cross and through our people."
The deputy foreign minister added, "After the repeated calls, which were unanswered by the people on the boats, they were told that they would not be able to break the blockade. The organizers failed to obey the army's non-violent calls.
"No sovereign state would tolerate such violence against a law-abiding state and its people. We call on all relevant elements to work together to solve the situation."
As for the Israeli activities after the raid, Ayalon said, "We are managing the crisis. At the moment the instruction is to cooperate and create the bridges and platforms in order to bring the affair to an end.
"The operational needs dictate a certain operation from a certain distance, and these are the considerations overcoming any other consideration. There was a very close cooperation between Hamas and an external organization. There was economic and operative cooperation."
Ayalon added that at least two guns were found on board the ships and  were used by the activists to fire at the soldiers.
Addressing the relations between Israel and Turkey, Ayalon said, "I don't view this as a matter between us and Turkey. The organizers are a private body affiliated with the terror organizations and Hamas. Israel has no interest in a conflict with any country, and we will never initiate a conflict with any country. We call on everyone to come to their senses in order to calm the situation down."
IDF: Lynch was planned
Representatives of the foreign press gathered Monday on a hill overlooking the Ashdod Port as the Navy began transporting the ships seized in the raid to the area.
Major Avital Leibovitz of the army's Foreign Press Branch told the reporters, "It was a planned lynch against IDF soldiers. They did not plan to enter a violent clash with the passengers, and unfortunately the passengers chose violence and used knives, spikes and even opened fire at the soldiers and snatched weapons.
"This is not a human rights organization. I know no human rights organization which uses such means."
As part of the PR efforts, the IDF Spokesperson's Office is distributing materials received from the helicopters to the media.
Major Leibovitz said she had held press conferences with all the foreign news agencies and briefed them on the IDF's response to the events, in coordination with the Foreign Ministry.
"We did not plan to make things worse or clash with the passengers, but they chose to take a different road," she added. "The operation continues and will take longer due to the violent activity. Unfortunately, the State of Israel has experienced many acts of terror via the sea, the recent one taking place only several months ago.
"We will take no chances when defending Israel's residents. I don't know a human rights organization with so many knives in order to cut vegetables for dinner."
A number of left-wing activists arrived in Ashdod to express their support for the Gaza sail. They were greeted by the city's residents who confronted them and urged them to leave the area.
Ilana Curiel contributed to this report
Posted by Unknown at 4:20 AM