Sephardic and General Shavuot Stuff . . . And a Few Recipes Too! 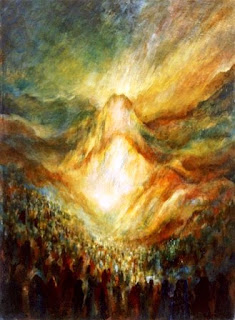 B"H Shavuot is the only major festival mentioned in the Torah that is not given a particular date on the Jewish calendar.  Instead, the date of the festival is given in relation to Pesach.  Instead of giving us an exact date, we are commanded to count a week of weeks, 49 days, in anticipation of the date the Torah was given.  Clearly, the lesson that Shavuot is intimately connected to Pesach cannot be ignored.  In order to understand the importance of Shavuot, we must begin with an understanding of this connection. Pesach is clearly the festival celebrating our freedom from the slavery of Egypt, but this was only the  beginning.    When one is enslaved, one is stripped of two important aspects of humanity—freedom and responsibility. As freedom diminishes, so does responsibility.  As slaves, we had no ability to control our own destinies or the destinies of our families.  We could not make decisions.  We lost track of the days as we strived hour by hour just to exist.  During this time, it is said that the Jewish people  slipped to the 49th level of impurity, a spiritual state so low that we  were almost lost completely.  Because we lost our freedom, we lost our responsibility.  Because we lost our responsibility, we lost our humanity. At Pesach, Hashm restores our freedom. At Shavuot, Hashm restores our responsibility. It’s a gradual process.  Immediately following Pesach, we were commanded to begin counting the days, keeping track of time, until the day we will receive the Torah.  Anyone who has attempted to count the Omer knows that every day the count becomes more difficult to remember to do. It requires a greater and greater level of commitment as the Omer progresses, each day building upon the next.  As the week of weeks progresses, every day requires more responsibility, more dedication, and  a greater level of attention to make it to the end. Finally, at the culmination of this process of restoration, each day that passes representing the redemption of another level of purity, we receive the Torah, the supreme example of Hashm’s confidence in our ability to rise to the occasion and accept responsibility to live as moral, upright, individuals. Shavuot is a holiday that most people associate with  eating milk products.  In fact, I have some friends who seem to think that it is a time when one should never eat meat.  This, of course, is not our tradition. Although we eat dairy in the morning, we definitely eat meat for our dinners in order to fulfill the Mitzvah of Simchat Yom Tov .   But, I'm getting ahead of myself.  What I want to do  is provide a short primer on the holiday of Shavuot, give some basics on general Sephardic practices (but, of course, I don't mean to speak for all Sephardim, as we are such a diverse group!), and give some specifics for this particular holiday--and, of course, throw in a nice recipe (why not?). OK, here goes:

It is a widespread custom to stay up the entire night learning Torah. This custom is based upon the Zohar (Parasha Emor 98a) which states that the original pious ones did not sleep this night, and they toiled in Torah.

Since  Torah is the way to self-perfection, the Shavuot night learning is called Tikkun Leil Shavuot, which means "an act of self-perfection on the night of Shavuot.” The reading established by the AR"I was reading the Pasukim from the beginning and end of each Parasha as well as from the Nivi’im and Ketuvim, etc. All of our Hachamim in the last 400+ years  followed this reading.

On Shavuot, we read the Biblical book of Ruth. Ruth was a non-Jewish woman whose love for G-d and Torah led her to convert to Judaism. The Torah intimates that the souls of eventual converts were also present at Sinai, as it says: "I am making [the covenant] both with those here today before the Lord our God, and also with those not here today" (Deut. 29:13).

Ruth is the grandmother  of King David, who was born on Shavuot, and died on Shavuot.

On Shavuot, it is customary to decorate the synagogue with branches and/or flowers. This is because Mount Sinai blossomed with flowers on the day the Torah was given. The Bible also associates Shavuot with the harvest of barley and fruits, and marks the bringing of the first fruits to the Holy Temple as an expression of thanksgiving (see Exodus 23:16, 34:22, Numbers 28:26).

Sephardic customs for Shavuot include the eating of meat, as meat is the food of celebration and the absence of meat may indicate mourning.  Many Ashkenazim eat only dairy foods on Shavuot--citing several Torah references for their custom, but this is not our tradition.

The book of Ruth is read in the synagogue, but not at morning services as is the tradition of Ashkenazim.

Because Shavuot is a commemoration of the offering of  the “first fruits,” it is customary to include fresh fruit in Shavuot menus.  Many also include dishes with honey because learning Torah is equated with the sweetness of honey and Shavuot is the holiday of the Torah.

Some Recipes!!!
First, my favorite recipe this time of year:
Fruit Sorbet

Use ice cream freezer or set refrigerator for fast freezing.

In refrigerator freezer: Freeze fruit mixture until firm around edges.  Beat egg whites until stiff.  Turn partially frozen mixture into chilled bowl and whip until smooth but not melted.  Quickly fold in egg whites and freeze until firm.

Put olive oil  in a large pot or tangine.  Fry the chopped onions until soft, then add  the chicken, salt, pepper, turmeric and cinnamon sticks. Add enough water to cover the chicken, about two cups. Bring to a boil, reduce the heat, and simmer until the chicken is done, adding water if necessary. Remove the chicken pieces.

Add the apricots and simmer for about fifteen minutes. Add the ground cinnamon and the honey, stir and cook until the sauce has a honey-like consistency.
(Add more honey if necessary.)