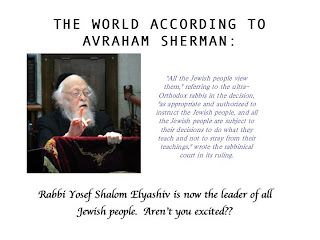 When will people simply not take this any more? What the HECK is going on?? This is such Chillul Hashm that I can almost not bear to read another article about these vicious men.

I don’t have a Smicha, but I can tell that these black-hatted charlatans are ADDING TO TORAH, placing stumbling blocks before the rebbe-rabid lost-soul throngs of man worshipping Haredim, and violating a basic and very explicit tenet of Judaism: DO NOT AFFLICT THE GER.

They are making up their own religion as they go along, and it has NOTHING to do with Torah. Quoting from the article: “As opposed to the regular format of rabbinical court decisions, Rabbi Sherman did not settle for quotes from previous rabbinic rulings, but instead quoted extensively letters and opinions of the ultra-Orthodox rabbis he follows, who oppose the present Israeli system of conversions. “

Disgusting. These men have no shame, no humility, no humanity. The title of Dayan should be removed, immediately, from them. They should dress themselves in sackcloth and ashes and roam the streets pleading for forgiveness.

May Hashm judge them as they have been judged. May every hidden sin they have ever been guilty of, appear, like pox, upon the patina of their “holiness” and afflict them until they moment perform Teshuva! If they do not do Teshuva, may those they have harmed be present at the Heavenly Court to give testimony! So what if they have lived a life of religious piety—for that reason, they are held to a higher standard and they must rule not according to the pressure of politics but according to Halacha. They can twist things as they wish, but Hashm will see every contortion in their soul and judge them by it.

Sherman (notice the LACK of honorific title, Please!) will go down in Jewish history as second only to Korach in his insolence, smugness, and self-pride.

It is no accident that the information about this case is released this week. Every Parasha comes true in the time we are living. We can see it if we look.

Now, I am waiting for the earth to open up and swallow him and his followers. I see him questioning the wisdom of Moshe Rabbeinu, I see him spitting in the Face of G-d, and I see him assuming he has the right to fulfill a leadership role that undermines the Torah.

Please, someone hand Sherman an incense-pan! He might as well show himself for what he is.

A decision published on Monday by the High Rabbinical Court exposes how the state's official rabbinical courts view themselves as subject to the decisions of ultra-Orthodox rabbis and leaders of the Haredi public.

Yesterday's ruling came in another conversion case, of a couple from the Tel Aviv area. The decision, made a month and a half ago but only published yesterday, related to an appeal by the woman, who the Tel Aviv Rabbinical Court ordered to be divorced from her husband, and that property matters in the case would only be heard at a later time. During the divorce proceedings doubts were raised as to whether the woman was actually Jewish, as she had converted before her marriage.

The High Rabbinical Court, the highest of the official state Jewish religious courts, decided to not recognize the woman's conversion - even though she had accepted Orthodox Jewish religious practice when she converted. There were also doubts as to the husband's Jewishness. Even though all these issues cast a doubt on whether halakha, Jewish religious law, requires the couple to divorce, the court decided to follow the strictest interpretations and force them to divorce.

At the same time, the couple and their children will be placed on the rabbinate's blacklist of those who have restrictions on who they may marry - which effectively prevents them from marrying in the future through the rabbinate.

Most halakhic decisors over the generations have ruled that religious courts ("batei din") do not have the authority to overrule other rabbinical courts, but Rabbi Sherman and the two other dayanim in the case, Rabbi Haggai Izrir and Rabbi Zion Algrabli, preferred the more conservative position of modern ultra-Orthodox decisors. That is the main innovation of the present decision, which relates to the important question of the source of the rabbinical courts' authority.