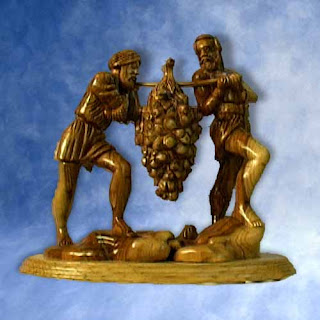 Make Up Your Own Mind
By Rabbi Marc D. Angel
http://www.jewishideas.org/angel-shabbat/make-your-own-mind-thoughts-parashat-shelah-le

Moses appointed the top leader of each tribe to spy out the promised land. When they completed their mission, ten of the twelve spies told the Israelites that the natives of the land were mighty giants, that the Israelites would be unable to conquer them. The people lost heart, mourning their dismal fate.

Caleb and Joshua were the two spies who spoke words of encouragement, assuring the Israelites that the land was good and that they would surely succeed in their march into it. But the people listened to the ten spies. Morale sank. God's anger rose: He punished the people by telling them that their generation had proven unworthy to enter the land. They would remain in the wilderness for 40 years. Their children would then enter the land. Caleb and Joshua were rewarded for their faithfulness, by being promised that they would survive the wilderness experience and would be privileged to enter the land.

Why did the ten spies bring back a negative report, even when they had God's assurance that He would lead the Israelites into the land? And why did the Israelites accept their report, rather than relying on Caleb and Joshua? Why didn't the Israelites themselves trust God's promises to them?

Some time ago, I read an article that discussed a phenomenon known as "informational cascade". Researchers found that people tend to suspend their own judgment when they hear an opinion espoused by a group of people or by an authority figure. Once they hear such an opinion, they are far more likely to go along with it--even if they think or know that it is wrong. An authoritative person or a group of people say something; those who hear are likely to accept it; and they in turn pass on this (mis)information to others. The result is an informational cascade, where mistaken ideas and false "facts" are spread throughout society.

Why don't people think for themselves? If they believe that something is wrong, why do they accept it anyway? Why do they pass on the mistaken information to others? Researchers have found that people tend to conform; they are ready to doubt their own judgment and defer to authorities or groups. Researchers found that public opinion changed, depending on who was first to voice an opinion. If the first was an authority figure or a group of people, it was more likely that the rest of the group would go along.

In the case of the spies, an inner dynamic must have occurred in which the negative view came to prevail. The ten spies--being authorities and a group--spoke first to the Israelites, before Caleb and Joshua spoke. This generated an informational cascade. People stopped thinking for themselves; they spread the negative information and mood to others. It was a cascade.

The 16th century rabbinic sage, Rabbi David Ibn Abi Zimra (born in Spain, and then lived in Egypt and Safed), explained a rabbinic teaching that the highest ranking judge should not give his decision first, because others would be reluctant to argue with him. Rabbinic tradition demanded that the greater judges withhold their opinions until the lesser ones have had their say. In this way, all opinions can be evaluated fairly, without intimidation. Our ancient sages well understood the power of "informational cascade" and took steps to prevent this from happening.

The upshot of this discussion is: we all need to think for ourselves. We need to avoid being caught up in an informational cascade. We must not abandon our reason and our judgment just because an "authority" or an "in-group" expresses an opinion. If the spies had known this, they would not have brought back a bad report. If the Israelites had known this, they wouldn't have had to spend 40 years wandering in the wilderness. We need to think carefully, evaluate the data honestly: and then make up our own minds.

***Please visit jewishideas.org, the website of the Institute for Jewish Ideas and Ideals. We'd like to have your comments on the current blog entry, dealing with the salaries of top executives in Jewish not-for-profit institutions.
Posted by Unknown at 9:48 AM