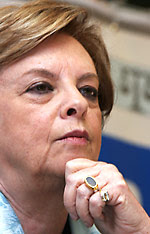 I am hoping that Ben-Ari is successful where others have been defeated, but he shouldn't stop with trying to get Dorit Beinisch removed from the judicial selection committee--he should have her removed from the court entirely.

This horrible woman, Dorit Beinisch, is a perfect example of a member of the “elite” class of politicians who are promoted because they know “where the bodies are buried.” She made her reputation with deception and deceit.

She is an unqualified crony of Barak who was implicated in a very bad scandal to frame right-wing groups and indict innocent persons in order to cover up Rabin’s assassination. Since then, she has been on a one-woman crusade to destroy the settlement movement, Israel, and anything vaguely religious. She is consumed by power for power's sake.

She met secretly with the US Ambassador to Israel regarding the Hevron Peace House, and was asked by 20 MKs to disqualify herself from ruling on the case, but she did not. She supported Arabs every time, helped destroy Jewish claim to the Temple Mount, made the ruling that two women can be the parents of a child, disallowed spanking, allowed the sale of pork in Israel, and allowed the practice of holding, indefinitely, in a maximum security prisons, innocent young girls (ages 14 & 16) from Hevron, accused of throwing rocks, and now she is supposed to “rule” on the conversions of thousands of Jews.

Here is a “refresher” article that remind us all of the now-famous but forgotten "Raviv-Beinish" protocols—for which she took the hit for her higher-ups and gained the allegiance of men even more evil than she is to attain the position for which she aspired.

Here's the story that explains it all:

The freshman MK is calling on his colleagues to sign a petition asking Beinisch to step down.

The initiative to remove Beinisch from the committee began, Ben-Ari explains, “following an aggressive, unprecedented campaign that began in the [Supreme Court] President's office, against the candidacy of four religious judges to the Supreme Court.” Beinisch's associates attacked certain candidates in particular, he said, chief among them judge Moshe Drori.

Report Led to Complaints of Racism
According to the Hebrew-language daily Yediot Aharonot, many complaints were sent following a report in the paper accusing Drori of racism. The paper published selected quotes from a judgement in which Drori ruled in favor of a hareidi-religious man accused of attacking a female supermarket cashier of Ethiopian Jewish origin, and followed with statements from Ethiopian-Israeli activists accusing the judge of racism.

Boaz Kenig, the attorney who represented the hareidi-religious man in the case that led to accusations of racism, accused Yediot Aharonot of taking quotes out of context. “In order to understand the verdict you have to read the entire thing,” he insisted. “There isn't a trace of racism against the plaintiff – the opposite.”

Among those who criticized Drori following the publication of the Yediot Aharonot article was MK Shlomo Molla, who termed Drori “racist and evil.” [MORE]
Posted by Unknown at 1:41 PM