Facebook Won't Remove "Third Intifada" Page. OK. We Asked Nicely. Now, On To The Other Options . . . 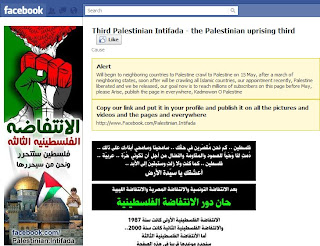 B"H
OK.  Facebook won't remove the "Third Intifada" page.  I guess they are afraid of the warning that appears on the page, “If Facebook Blocked This  Page... All Muslims Will Boycott Facebook For Ever!”
But should they, seriously, worry about that?  Hello!  I don't think all the Muslims would boycott Facebook any more than all the Jews would boycott facebook if it didn't block the page.  Facebook has just become too big, too important for the spread of information.
So, why aren't they blocking it?  It clearly violates the terms of service for Facebook pages,  specifically Section 3, No. 6, 7, and 10:
So, what are we left with?  There are several options.
I suggest that one reason that the page still exists is that the Shin Bet, FBI or CIA created the page in order to attract and find the crazies and get their names.
Even if that isn't the case . . . a nice rumor campaign might be all that is needed.  If the crazies think that they are on a site sponsored by the US or Israeli intelligence community, they will avoid it like the plague.
M
-----
Battle Over Facebook's 'Third Intifada' Page  http://www.israelnationalnews.com/News/News.aspx/143154 by Chana Ya'arThe Internet is heating up over Facebook's refusal to block a fan page calling for a Third Intifada against Israel. An email campaign to pressure the popular social networking site into removing the page has been mounted by pro-Israel groups as well as private individuals. All have expressed increasing concern over the potential danger to Israeli citizens that may result from the page, which clearly promotes violence against Jews in Israel. One woman was killed and a second person is still in critical condition, with 50 others wounded after terrorists planted a bomb filled  with ball bearings and sharp objects next to a busy bus stop last Wednesday across from the Central Bus Station in Jerusalem.
The attack came the week after the heinous murder of 5 members of the Fogel family,  and during a week in which long-range Grad Katyusha missiles were fired  from Gaza at Ashdod, Ashkelon, Be'er Sheva, Yavneh and just south of Rishon LeTzion. Numerous other short-range Kassam rockets exploded in Jewish communities throughout the western Negev, as Gaza terrorists continue to escalate their attacks on southern Israel. Meanwhile, rock attacks on the roads of Judea and Samaria appear to be on a corresponding rise as well, leading to speculation over whether a third intifada may indeed be on the way.Abraham H. Foxman, National Director of the Anti-Defamation League (ADL), slammed the site for its willingness to support a page that promotes violence against Jews and its unwillingness to comply with its own terms of service.Although the page is written almost entirely in Arabic, a display ad in  big English letters posted on the page warns, “If Facebook Blocked This  Page... All Muslims Will Boycott Facebook For Ever!”As of Sunday morning, the page had garnered 328,000 “Likes” from readers.Foxman said his organization had reached out to Facebook with a request  to have the page taken down, but “to no avail” – despite the fact that the page is in clear violation of the site's terms of service.The page, 'Third Palestinian Intifada', urges  its readers to copy the link, place it in their profiles and publish it  on all pictures, videos and pages – everywhere they can. An alert announces that a march to “Palestine” will begin from neighboring countries on May 15 and soon after, “Palestine will be liberated and we will be freed. Our goal now is to reach millions of subscribers on this page before May.”The page also includes inflammatory language that calls for supporters to build on the previous two murderous previous intifadas in which Arab terrorists murdered and wounded thousands of Israeli civilians. The second intifada is also called the Oslo War as it took place after the Oslo peace accords were signed by PLO leader Yasser Arafat and Israeli Prime Minister Yitschak Rabin. The notice refers readers to related content on other sites such as Twitter and YouTube.“This Facebook page constitutes an appalling abuse of technology to promote terrorist violence,” said Foxman.“We should not be so naïve to believe that a campaign for a 'Third Intifada' does not portend renewed violence, especially in the current climate that has seen a dramatic increase in rocket attacks from Gaza, the brutal murder of the Fogel family in the West Bank, and a terrorist bombing in Jerusalem.”Last week, Yuli Edelstein, Israel's Minister of Diplomacy and Diaspora Affairs also sent a letter to Mark Zuckerberg, Facebook CEO and one of its founders over the issue. He wrote him that the site has "great potential to rally the masses around good causes, and we are all thankful for that. However, such potential comes hand in hand with the ability to cause great harm, such as in the case of the wild incitement displayed" on the Third Palestinian Intifada page. A petition urging Facebook to remove the dozens of pages promoting hatred of Israel and incitement to kill Jews -- incuding the page calling for a Third Intifada -- has been started on the Internet by the Jerusalem-based Aish HaTorah Yeshiva. The petition calls on Facebook to "remove any pages that promote hate against Israel and the Jewish people."
Posted by Unknown at 10:12 AM