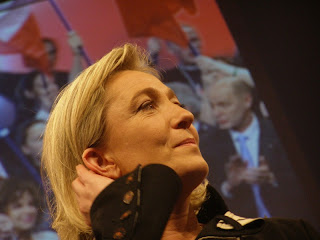 B"H
Economic downturns always breed xenophobia, and xenophobia cannot be contained to one group of people.  What starts out as Marine Le Pen's campaign slogan to limit Islam will soon bloom into a nationalist fire against anyone who is "different"--race, culture, religion--it won't matter.
She promises that she is not her father, and she tries to "soften" her father's comments about the Holocaust, but I don't believe her for one minute.
She may seem like a great candidate in a country looking to blame their condition on someone, or a country who wants to lash out in pain at someone, but she represents a dangerous and growing presence in Europe--the kind of dangerous and growing presence that existed 70 years ago.
As much as the Moslems hate us, we are, unfortunately, hitched to the same wagon in the eyes of the xenophobes.  Whatever is directed toward Islam will be, inevitably, directed toward us as well.
M
-----

http://www.ejpress.org/article/49498
by:  Joseph Byron
PARIS  (EJP)---A new poll in France reveals that Marine Le Pen, head of the extreme-right National Front party would defeat President Nicholas Sarkozy in next year’s presidential elections.
In the poll, published on Sunday in French daily Le Parisien,  Marine Le Pen, who took over the party’s leadership from her controversial father Jean-Marie Le Pen, would get 23 percent of the vote  in the first of the two rounds of presidential elections due to occur in May 2012, while Sarkozy would only receive 21 percent of the vote.
"This  poll makes me believe that Nicolas Sarkozy will lose this presidential election. I don't think he can climb back up. He represents such a disappointment and rejection by French people that I think he's already out of the second round," the 42-year-old Marine Le Pen told journalists. Le Pen's anti-immigrant platform so far has included comparing Muslims praying in the streets of France outside overcrowded mosques in France to the Nazi occupation while Sarkozy  initiated a national debate on the role of Islam in France, a move that  some feel is designed to try to neutralize Le Pen. The  poll’s results revived the spectre of the 2002 presidential election when Marine Le Pen’s father knocked socialist candidate Lionel Jospin out of the presidential race in the first round before losing to Jacques Chirac. Since  Marine Le Pen took over the National Front party last year, she softened her father’s traditional revisionist line on the Holocaust and anti-Semitism and appeared to be more targeting the Muslim community of France as a defense of French values.   But  a leader of the French Jewish community has said he sees no difference between Marine Le Pen and her father, stressing that she has the ability to be less provocative than her father. Sunday’s  poll also shows that opposition Socialist Party leader Martine Aubry, who has not announced her intention to stand, would also get 21 per cent. The survey does not give the level of support for Dominique Strauss-Kahn, Managing Director of the  International Monetary Fund (IMF), who is expected to declare his intention to represent the socialists in the May 2012 election and is widely believed to stand more of a chance than Aubry.