Brutal Murder of Fogel Family is More than Terrorism--It is Barbarism. 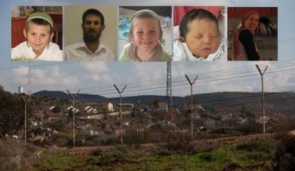 B"H
So what are the leftists going to say now?  Will they claim the newborn was inciting the terrorists?  Maybe the three-year-old was making threats?  What sickness does it take for armed men to come into a family's home in the middle of the night and murder a rabbi, his wife, and three innocent children?
I will tell you what sickness it takes.
It takes the sickness of a society that raises their children to hate Jews.  It takes the sickness of a society that gives school children books that poisons them to think that murdering a Jew will send them to heaven.
It takes the sickness of a society where the Prime Minister would suggest his own people were living illegally in their own homes, and a Secretary of Defense that would collaborate with the enemy to destroy Jewish homes.
It takes the sickness of a society that will listen to anti-Semites dressed in the robes of "Peace Now" rather than supporting their own people who are trying to make a life in the land that G-d has given us.
May G-d avenge the murder of this family, and may the entire country of Israel rise up at once and put an end to the activities of leftists, anarchists, and terrorists working hand in glove to destroy Israel.  May the entire land of Israel raise up to demand that Judea and Samaria be immediately annexed.  Don't let this family suffer in vain.  Make this a moment of truth.
May the Fogel name be preserved on the lips of every Jew, and in the names of cities up and down the length and breadth of Israel.
May Hashm bring comfort to the entire Jewish nation, and especially to the orphans.
M

The initial findings of the investigation into the terrorist massacre in the Israeli town of Itamar in Samaria Friday night show that the Fatah ‘Freedom Fighters’ stabbed the Fogel family's sleeping three year old in the heart and slashed the throat of his three-month-old sister.

The IDF and police forces are conducting widespread searches in the vicinity of the community since the barbaric terrorist murder of five members of the Fogel family in their home on Friday night.

It is not yet clear how many terrorists took part in the massacre. About 20 Arabs have been arrested up to now.

One area in which the IDF is concentrating its investigations is whether there were any intelligence warnings of terrorist plans before the attack that might have alerted residents.

The community of Itamar has had no terrorist attacks since 2002, when an advanced protection and security system called the Special Security Area was installed. The electronic system, which includes varied methods  of observation and a wired fence, is kept in repair by the regional authority rather than the IDF.

In addition to an electronic fence surrounding the community, there is an inner, coiled wire fence. The community is allotted six non-army security personnel from a recognized security firm who are on patrol all  the time. All signals go automatically to a central operations room in the town staffed by two of these guards, and in addition there is a company of soldiers on the adjoining hill.

The IDF investigation of the attack has discovered that at 20:59,  terrorists entered the community. They jumped over the fence and an alert sounded. The guard on duty went to the spot from which the warning  was heard, but saw no evidence of infiltration and therefore, made the erroneous decision that an animal had activated the electronic fence’s warning signal.

A security person who was in the vicinity said that since the fence was  not cut, the guard thought there was no infiltration and did not inform  the IDF unit that was less than a kilometer away.

The terrorists first entered one home, which was empty. They found a weapon there, which they do not seem to have used. A group of youngsters  was having a Sabbath evening party at the Fogel house nearby, and at 22:20 they left, along with the Fogel’s 12-year-old daughter, for an activity at the local Bnei Akiva youth group.

Between 22:20 and 22:30 the terrorists entered the house through the living room picture window, did not notice the 6-year-old boy sleeping on the couch and continued on to the bedroom where they slashed the throats of the father and newborn baby who were sleeping there. The mother came out of the bathroom and was stabbed on its threshold. The evidence shows that she tried to fight the terrorists.

They then slashed the throat of the 11-year old-son who was reading in bed. They did not notice the 2-year old asleep in his bed, but murdered the 3-year old with two stabs to his heart. After that, they locked the door, exited through the window and escaped.

Exactly two hours after the infiltration, there was another warning signal from the same spot on the fence, as the terrorists left the way they had come.  Once again, the patrol did not identify the source of the signal as infiltration.

The 12-year-old daughter returned home at 00:30 and found the door locked. She asked a neighbor, Rabbi Yaakov Cohen, of the Itamar Yeshiva,  to help her. He brought a weapon with him once he noticed tracks and mud near the house. The two woke up the 6-year old sleeping in the living room by calling through the window and when he opened the door, the Rabbi returned to his home.

When she entered the bedrooms, the young daughter saw the horrific bloodsoaked scene and ran out of the house screaming. The neighbor ran back and fired several shots in the air to alert security personnel.  Within a short time, large police and IDF forces arrived and  began intensive searches to see if the terrorists were still in the community. At 03:30 a.m., military trackers discovered footprints leading to the Arab village of Avrata.

The IDF Chief of Staff, General Benny Gantz, arrived at the family’s home during the morning hours and said: “We will not rest until the murderers are in our hands. This is a bestial act perpetrated by barbarians. It is impossible to grasp the horrendous scene before us. We  are working non-stop on the intelligence and operational fronts.”

Defense Minister Ehud Barak held a situation meeting in IDF Tel Aviv headquarters. Attending were the Chief of Staff, ISA head Yuval Diskin and other high ranking IDF intelligence and security personnel. Barak instructed those present to use every means at their disposal to find the murderers as quickly as possible. He called on the leaders of the Palestinian Authority to condemn the murders and on the Judea and Samaria Regional Authority Heads to exercise restraint.