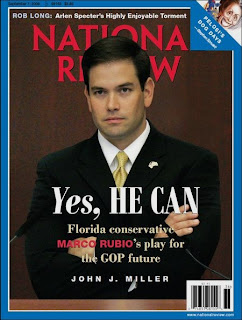 B"H
Marco Rubio says he wants to take a "private trip" to Israel, and the press jumps on its "meaning."
Interesting.
How about this for meaning:  Israel is important, personally, to Marco Rubio.
It is important, personally, to most of the people who support her.  This is not a politically correct position, this is not a savvy move, this is a personal and very profound feeling of connection to the Holiness and the history of the Land.
There is a reason that people have fought for 5,000 years over the land of Israel, and it doesn't have anything to do with politics.
Have a beautiful trip, Senator-Elect Rubio!  Enjoy yourself!  Stop and have some falafel, go to the Shuk and buy some kitchy things to take home for your friends and family, climb Masada, float in the Dead Sea, and wonder if the very dust under your feet was the dust under the feet of Abraham.
Love Israel.  There is no other place like it, and we know, exactly, how you feel.
M


He has called on the United States to move its embassy to Jerusalem
http://www.ejpress.org/article/47117

MIAMI-WASHINGTON  (EJP)--- Marco Rubio, the Republican of Florida who was elected to the Senate this week and considers himself a “Tea Party’’ member, is set to arrive in Israel on Sunday for a private visit.

"Senator-elect  Rubio and his wife Jeanette will be making a private and personal visit  to the Holy Land next week," his spokespan Alex Burgos told AFP by email, stressing that details of the trip "will be kept private."
"Senator-elect  Rubio is also working with pro-Israel supporters to make an official trip back to Israel early next year after he is sworn into office," said  Burgos.

Rubio,  39, the son of Cuban exiles, cruised to easy victory in Tuesday's elections over his Democratic and independent rivals and was immediately  anointed one of the Republican party's rising stars and potential vice presidential hopeful.

"He's  never been to Israel before, he's always told us he wants to go," Israel's deputy consul general in Miami, Paul Hirschson, said.

Rubio,  who takes office in January, had no scheduled meetings with Israeli government officials, said Hirschson, who joked that the senator-elect wanted some down-time before what is likely to be a hectic congressional  session.

"I don't think he's going to have too much free time," said the diplomat, who said Rubio was bringing his wife.

Hirschson  said the Israeli consulate in Miami had long suggested to Rubio, who leaves Sunday, that he visit the staunch US ally and tour the country.

"We  always recommend to people that they go Jerusalem, Yad Vashem," the Holocaust Memorial in Jerusalem, said Hirschson. "It's a tiny country, but there is a great deal to see."

Political  pundits say that Rubio’s visit, so soon after the election win, is meant to show that the US Congress in its current form will continue where it left off — at least where Israel is concerned.


According to FloridaIndependent.com,  in a speech Rubio gave on Israel in June to the Republican Jewish Coalition, he called on the United States to move its embassy to Jerusalem and talked “about the need for the United States to stand with  Israel without equivocation or hesitation.”

In  that speech, according to the website, he also criticized the Obama administration’s handling of the U.S.-Israel relationship and said that the U.S. should not push Israel to a settlement freeze before negotiations. Like America, he said, Israel is an “exceptional” nation.

"It  is abundantly clear that the 112th Congress will continue America's long tradition of staunch support for a strong, safe and secure Israel and an abiding friendship between the United States and our most reliable ally in the Middle East,” the organization said.

The  elections saw five Jewish Democratic representatives lose their seats in the Senate but the Republican victory in the House of Representatives  means that the only Jew in the party, Eric Cantor from Virginia, is set  to become House Majority Leader.

Among  the Jewish politicians whose terms came to an end were: Ron Klein and Alan Grayson from Florida, Steve Kagan from Wisconsin and John Adler from New Jersey.

"Many of the strongest friends and supporters of the U.S.-Israel relationship were reelected on Tuesday," AIPAC said.

These included Senate Majority Leader Harry Reid, a Democratic representative from Nevada,  and  Republican John Boehner from Ohio, widely tipped to be named Republican  majority leader in the House of Representatives, which his party seized  from Democratic control.