Summer May Heat Up Tensions With Lebanon, Syria . . . Iran 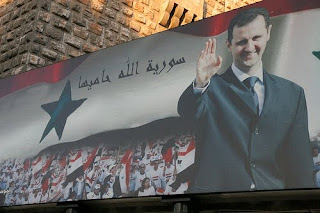 B"H
OK, if you have space, time to stock up on gasoline!
Of course, Israel doesn't have any oil, and Syria and Lebanon really don't export any oil to us, but the oil companies will jack up the cost of oil and use any conflict with Israel, Lebanon, Syria as an excuse to raise the cost to astronomical levels because the average consumer has no clue about geography or commerce.
Meanwhile, according to Joseph Farah, M16 (that's the British version of our CIA) is reporting that Israel has been very clear with Assad of Syria that any missiles launched by Hezbollah in Lebanon will be answered by the bombing of Syria.
And, of course, there is the whole Iranian connection.  Maybe an attack by Hezbollah will be the impetus to attack Iran finally, and do away with the nuclear threat . . . or, more ominously, maybe Iran wants the attack on Syria so that they have reason to attack Israel.

Let's just hope that all those prayers for our men and women in uniform will help to keep them safe during this very scary time.
M
-----
The "New Hizballah" built by Syria  sparks ME summer war fear
DEBKAfile   Exclusive Report  April 18, 2010, 5:24 PM (GMT+02:00)
http://www.debka.com/article/8726/
Debkafile's military sources disclose that Syria has expanded the flow of smuggled Syrian and Iranian weaponry across the Lebanese border to Hizballah in line with a master-plan charted in Tehran and Damascus for transforming the 25,000-strong Hizballah terrorist militia into an organized, mobile army with a whole range of sophisticated missiles and other weapons. The  new Hizballah is being trained to carry out such offensive operations as capturing parts of Israel's Galilee and equipped with the hardware for knocking out warplanes, warships and armored strength.
One of their missions will be to defend the Syrian capital, Damascus. Tehran and Damascus  calculate that the next time a war erupts on Israel's borders, its army will try and outflank Syrian forces on the Golan and drive past the units defending Damascus. That is  where Hizballah is expected to come in.
Even after the Kuwaiti Al Rai claim that Syria  had smuggled Scud ground missiles into Lebanon  proved inaccurate and was denied in Washington,  regional war tensions remained high - although not for the reason ascribed by Jordan's King Abdullah during his current visit to Washington.
The king forecast an outbreak of Middle East  hostilities in the coming summer because of the Israel-Palestinian diplomatic stalemate. What's the connection? Our sources ask. Rather than admit he is nervously watching his aggressive Arab neighbor to the north, the Jordanian ruler is pinning the region's troubles on Israel because it is the right tune to sing in Barack Obama's Washington.
In actual fact, a Middle East war this summer depends on two actions which have nothing to do with the Palestinians: a decision by the US and/or Israel  to strike Iran's nuclear facilities together or separately, and a decision in Tehran to unleash its allies against Israel -  spearheaded by Hizballah - to preempt such an attack.
Ready to step into its new shoes, Hizballah is being armed with five major military capabilities, debkafile reports:
1. Surface-to-surface missiles able to reach as far as the Dimona reactor in southern Israel: They include Fajr-5, which has a range of 33  km, and the M-600, developed by Syria from the Fateh-110, whose range is 250 km. Both are precise, propelled by solid fuel and carry 500-kilo warheads of conventional explosives, as well as being able to deliver chemical, biological and radioactive materials.
This dangerous new arsenal which tops up the 40,000 rockets Hizballah was allowed to pile up since the 2006 Lebanon war.
Saturday, April 17, Israel's  deputy defense minister Mattan Vilnai, warned that Syria and [MORE]
Posted by Unknown at 11:54 AM