Are we really celebrating our independence, or merely the fact we live in Israel? 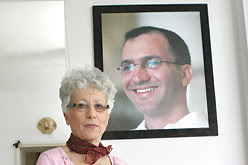 Wow.  Miki Goldwasser doesn't pull any punches here.  She is disgusted by those who have sold their Zionism for votes, and she is telling it as it is.
G-d Bless You, Mrs. Goldwasser!  You are a tribute to the memory of your son, to Israel, and to the Jewish people.
Give 'em hell!
M
-----
We’re still in Diaspora
Despite having our own state, we haven’t let go of Diasporic Jewish patterns
Miki  Goldwasser
http://www.ynetnews.com/articles/0,7340,L-3878114,00.html

In the moments between Memorial Day and Independence Day I ask myself: Are we really celebrating our independence, or merely the fact we live in Israel?

There is a great difference between living here, without letting go of our wandering Jew mentality, and independence. For me, independence means letting go of
Diasporic Jewish patterns that accompanied us for 2,000 years.

However, to my regret, we are still captive to these Jewish, Shylock-style, cowardly patterns. We are still merchants who are led by money, instead of the values imparted by the real Zionists, who moved to Israel in order to build it and hold on to it.

These people attempted to create a different kind of Israeli. A proud Israeli who would never again be willing to hear the word Zhid, or  any other derogatory term for Jews. An Israeli who wants what’s best for the country, based on the realization that without our state there is no existence. An Israeli that understands the importance of a moral society.

The Zionists who embarked on the mission of building this state did not dream that we will reach a time where some jobs are no longer respectable, but rather, everyone has to become a lawyer. The Zionists who embarked on building this country dreamt that everyone will work, and that there will be no sectors that feel they deserve something from the state, or free-riders who use the excuse of studying the Torah.

The people who gave us this country held a dagger in one hand and a book in the other. They did not grant gifts in exchange for votes.  They also did not hand out presents to the enemies from within, who are  taking over shamelessly and with no regard to the laws, duties, and rights of the state they live in.

The real Zionists did not imagine that a time will come when the  Israeli government will become corrupt and so huge, at the public’s expense; they did not imagine that the corruption of our leaders, industrialists, and religious clerics will rule the country with such great might and chutzpa.

These  real Zionists were naïve enough to start building a wonderful state for  us; their sons died on behalf of this state and our sons continue to die for it.

So precisely during the moments between Memorial Day and Independence Day, I ask: Where are we heading to from here?

Miki Goldwasser is the mother of fallen IDF soldier Ehud Goldwasser
Posted by Unknown at 12:42 PM