In Memory of Israel's Fallen, and a Prayer for Those Who Serve Her Today 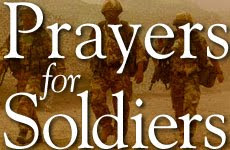 B"H
These soldiers died in the service of Israel, of the Jewish People everywhere.
It is a miracle we have Israel back in our hands, it is a miracle that we have a strong military to protect that land, and it is a miracle, every day, that Jews live in our own land.
Hashm uses us as tools to keep this miracle going, and we must never forget that Israel exists by the blessing of Hashm alone.
May the names of these brave men and women never be forgotten!  May their families be comforted, and may every single one of us lift our voices in prayers to the almighty that every soldier now in the service of Israel is protected!
Here, in the English version, is the prayer for the members of the armed forces:

He Who blessed our forefathers Abraham, Isaac and Jacob -- may He bless the fighters of the Israel Defense Forces, who stand guard over our land and the cities of our God, from the border of the Lebanon to the desert of Egypt, and from the Great Sea unto the approach of the Aravah, on the land, in the air, and on the sea.
May the Almighty cause the enemies who rise up against us to be struck down before them. May the Holy One, Blessed is He, preserve and rescue our fighters from every trouble and distress and from every plague and illness, and may He send blessing and success in their every endeavor.
May He lead our enemies under our soldiers’ sway and may He grant them salvation and crown them with victory. And may there be fulfilled for them the verse: For it is the Lord your God, Who goes with you to battle your enemies for you to save you.
Now let us respond: Amen.
Text courtesy of OU.org

The annual Remembrance Day for Fallen Soldiers begins at sundown Sunday in memory of 22,682 soldiers who fell defending Israel as well as more than 2,000 victims of terror. This year,112 soldiers were added to the death toll.

Memorial ceremonies  will be held at hundreds of locations, including the Western Wall, in the presence of President Shimon Peres. Thousands of Jews will study Torah at synagogues where study sessions and lectures will be arranged. The Chief Rabbis of Israel and of the IDF will attend the “Chai HaTzafon” synagogue in Petach Tikva.

Knesset Speaker Reuven Rivlin  will lead a ceremony at the Knesset, where songs in memory of the fallen soldiers will be heard. Defense Minister Ehud Barak also is scheduled to attend. Prime Minister Binyamin Netanyahu will participate in a ceremony at the Mt. Herzl military ceremony on Monday. On Saturday night, he visited the gravesite of his brother Yoni, who fell in the Entebbe rescue effort.

Widows and Orphans
A study conducted among IDF widows has revealed that most children of fallen soldiers experience learning difficulties. Nearly half of the widows said that raising their children after the loss of their husbands has been the most difficult challenge for them.

The loss of soldiers and the last several years of disappointment in the political echelon were registered in a survey of the general public. Only 22 percent of respondents said they think that politicians carry out the promises they  make on Remembrance Day, that bereaved families should be considered throughout the year.

There are approximately 4,800 IDF widows and 8,000 children who suffered the loss of a parent who died in the service  of the IDF. The most recent widow is Shlomit Peretz, whose husband Eliraz was killed in Gaza last month.

Despite the pain, Israel will end Remembrance Day on Monday night with the beginning of celebrations of the 62 years since the modern State of Israel was established. (IsraelNationalNews.com)
Posted by Unknown at 7:12 AM