Ha'aretz Doesn't Understand Ethics or Zionism, So Let's Teach Them In A Language They Understand: Money. Time to Boycott Ha'aretz! 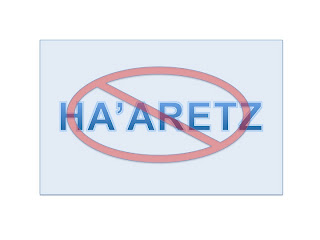 B"H
I realize it is very hard to boycott a newspaper, especially when they might be in the habit of publishing stories that are of great interest to readers.
However, in light of the fact that Uri Blau has, in his possession, over 2,000 classified documents which he refuses to relinquish and which could be very damaging to the State of Israel, I think it is important for each and every one of us to help Israel at this time by boycotting Ha'aretz, their sponsors, and their advertisers until such a time that Ha'aretz releases Uri Blau from their employ, and/or Uri Blau gives himself and those documents up to Israeli authorities and faces justice for what he has done.
Treason is a serious crime which may not look very evil, as it is often committed by well-dressed, well-mannered individuals who are not accused of any particularly violent action.  However, treason is very evil.

A traitor puts each and every citizen at risk, especially our soldiers--our young men and women who serve their country honorably every day.
Who knows how many young men and women, how many every day citizens, and how many children these traitors put at risk by sharing classified information with G-d knows how many other people for "ideological" reasons.
Shame on them, and shame on Ha'aretz for supporting Uri Blau after they discovered his treasonous and cowardly activities.
He was not playing by the rules--not journalism's rules, not society's rules, not Hashm's rules.
If he is so sure that he is innocent, let him stand before the court of justice and prove that innocence.  Until then, I agree with the MKs.  Ha'aretz should be boycotted and/or shut down.
I have often read/commented/referenced articles by Ha'aretz in this blog.  I shall not do that again until Ha'aretz chooses to take action against this coward, Uri Blau.  I hope other bloggers, readers, and advertisers will follow suit.
Maybe Ha'aretz doesn't understand ethics, but they do understand money.  So, we must teach them in the language that they understand.
M
-----
Media Defends Accused Spy; MK's Slam Haaretz Newspaper
by Gil Ronen
http://www.israelnationalnews.com/News/News.aspx/136918

MK Dr. Michael Ben-Ari (National Union) called on Minister of Interior Eli Yishai to use the powers vested in him by Israeli law to close down the Haaretz newspaper, whose reporter Uri Blau allegedly has possession of thousands of illegally obtained secret documents.

“Freedom of expression is the soul  of democracy and indeed, the authority to shut down a newspaper is granted only in extreme and unusual cases,” Ben-Ari wrote, “but when Haaretz  announces it will pay Uri Blau's expenses, and Haaretz is  behind the initiative to keep Blau from returning to Israel – there is no alternative but to order the shutting down of Haaretz newspaper, if only for a short time, until Blau returns, shows up for interrogation and hands over all of the classified documents.”

MK Yisrael Hasson (Kadima), the former Israel Security Agency (Shin Bet) did not go as far as Ben-Ari but called upon Haaretz's subscribers to freeze their subscriptions until Blau gives back all of the documents obtained illegally "and is immediately fired.”

Why  isn't Kam in jail?
Terror victims' advocacy group Almagor issued a statement in which it demanded that Anat Kam – who is accused of stealing the documents and giving them to Blau – be placed under full  arrest until her trial ends, and not under house arrest as she is presently. It noted that in previous espionage cases, the individuals charged were always jailed during their trials.

Almagor further demanded that Kam be tried before a military court since she was a uniformed soldier when she carried out her alleged espionage. “Only a panel of judges that includes people of military background can fully appreciate the severity of her deeds, especially given the light atmosphere that is being created by her attorneys and those who side with them in some of the media,” the group said.

Media supportive
Indeed, much of Israel's media coverage of the treason case show news outlets playing defense for the suspected journalist spies and placing the media's rights to information above the  law, this despite IDF statements that Israeli lives might have been threatened by what was contained in the stolen documents.

For hours on end Thursday, Israel's online media outlets in English headlined the espionage case involving two journalists, one of whom was a  soldier at the time, in a way that appeared to favor the suspects. In the afternoon and evening, the top stories in the Ynetnews, JPost  and Haaretz websites curiously focused on the accused spy's version of the affair, depicting her as more of a victim than a villain.

Ynetnews's  top headline was “'Case threatens democracy'” – actually an abbreviated  version of a quote from Kam's defense lawyer. JPost also gave prominence to the defense lawyer's version, with the headline “Former IDF soldier's lawyer: Case damaging to democracy.” The English-language version of Haaretz, a suspected culprit in the affair, quoted the same attorney's claim that his client, who is accused of wilfully copying thousands of IDF classified documents on to her own computer,  had been “made a scapegoat” in its headline.

Channel 2's central evening newscast featured numerous sound bites from another one of Kam's  lawyers, high-profile attorney Avigdor Feldman, and a sympathetic interview with Kam's mother. Anchorwoman Yonit Levy spoke with Guy Peleg, the channel's reporter on legal affairs, and suggested that the accusation of espionage was "too harsh."

Ynet in Hebrew provided a long video report on a demonstration by about a dozen radical leftists in Tel Aviv who accused the IDF of crimes and praised Kam.

By evening, Haaretz in Hebrew had moved the story that caused shockwaves throughout Israel down to the number five position, giving it less importance than a story about the Obamas' intention to appear on American Idol. (IsraelNationalNews.com)