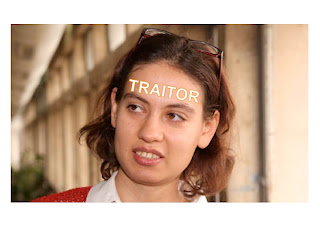 B"H
There isn't much I can add to this excellent evaluation of the situation by Debka.  I think it is important to share this, and to understand that our soldiers cannot win wars with terrorists when our most important military secrets are available for the taking.
A lot of the security concerns have been focused upon high technology and computer hacking--when our enemies were just walking in and physically stealing the documents!
Not only do we need to pay a lot more attention to the treasonous activities of these leftists, we also must be careful to re-evaluate how the IDF does business, how Top Secret material is handled, and how to keep secrets secret.
This whole affair may serve as a very important wake-up call for our military brass to step it up in the security arena.  I'm sure they have already done the things they needed to do to improve . . . at least I am assuming they have.
After all, this security breach is almost a year old--meaning that the IDF has had that long to look into the handling of their documents, evaluate their security, and make important changes.
G-d willing, these changes will help protect us all!
M
-----
Glaring intelligence lapse exposed  in Anat Kam espionage case   DEBKAfile   Special Report  April 8, 2010, 5:17 PM (GMT+02:00)


The Anat Kam affair on which a gag order was partially lifted on Thursday, April 8 is above all a striking intelligence and field security failure. More importantly, this soldier's ability to photocopy and filch 2,000 top-secret documents from an army facility over a two-year period ranging from 2005 to 2007 demonstrates the vulnerability  of the highest command levels in the IDF to infiltration by hostile elements and the free availability of their most secret documents.

Only two days ago, the trial began of another IDF soldier, his relatives and several Palestinians, who managed to break into the office  of Chief of Staff Lieut. Gen. Gabi Ashkenazi and purloin classified material for passing on to Hizballah agents.

Shin Beit director Yuval Diskin told the media Thursday that documents Anat Kam stole during her service in the OC Central Command Maj. Gen. Yair Navey's office and leaked to an Israeli journalist  "posed a direct  and real threat to the lives of soldiers and civilians."

Kam said she acted out of "ideological" - presumed radical left - motives.
In 2008, after offering them around to other journalists, Kam gave the secret files to Haaretz reporter Uri Blau who used them for articles he published in the paper. The military censor okayed them for publication.  Eventually his stories attracted the attention of military officials and, when it was discovered that they used classified materials from the  Central Command office, the Shin Bet was brought in to lead the probe.

In September 2009, the Shin Bet and Haaretz signed an agreement whereby  Uri Blau promised to hand over all the documents in his possession, in return for which the Shin Bet agreed not to use them to initiate a criminal investigation against him or track his sources.

Two months later, in December 2009, Anat Kam was identified as the source of the leak and placed under house arrest. On January 14, she was  indicted on charges of grave espionage.

It turned out later that the reporter Blau handed over only 50 secret documents. The rest he is suspected of keeping back.

In 2009, he left Israel  and moved to London,  apparently to avoid arrest and questioning about the missing documents.

In interviews with foreign journalists, Haaretz chief editor Dov Alfon said this week the newspaper will take care of all Blau's needs for as long as necessary. This Israeli daily is therefore protecting its reporter despite the breach of his agreement with the Shin Bet and is treating his case as the fundamental issue of a journalist's right to immunity and the immunity of his sources. [MORE]