OOPS! Lefty Poll Comes Out Against Dividing Jerusalem, Expelling Jews from Jewish Land, '67 Borders, and the "Right of Return" 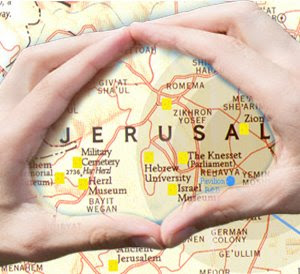 The poll results in a nutshell show how Israelis view the "Peace Process":

Of course, I believe the answer to the question of why everyone believes in a “two state” solution is that second state already exists. It’s called J-O-R-D-A-N.

Wasn’t that the point of dividing Israel at the start? Now they want us to divide the division?

The fact that this poll was carried out by OneVoice, a left-wing organization is extremely significant because polling can be easily manipulated by one group or the other to get results that they want. You can see for yourself in how it is reported in their Full Report.

For example, one can poll during certain parts of the day when they are sure that their supporters are more likely to answer the poll. Also, you can alter the way a question is asked, and how one question follows another in order to drive a particular viewpoint to the top.

Or, when you are reporting the results you can show your "disappointment" with the results or flip-flop the positive and negative numbers (i.e. if one question turns out to be 60% in favor, you say they are "40% against.") Which is what they do, by the way, and you can't even believe how JPost and other lefty newspapers have played with the numbers! It is atrocious.

I am assuming that, even if they wanted an objective poll, they did some of this subtle manipulation, maybe without even knowing it—for example, some people, upon hearing who was conducting the poll, might have slammed down the phone and refused to talk while others wanted to share with this organization.

The fact that even this left-wing organization came up with these resounding results against the division of Jerusalem and the expulsion of Jews from Judea and Samaria significantly strengthens the hand of BiBi in refusing to participate in the destruction of Israel by following the ideas of the arabs and/or the “Quartet” of nations.

More than three-quarters of Israelis oppose dividing Jerusalem and allowing the capital to be shared as the headquarters for a new Palestinian Authority state, according to a poll carried out for the left-wing OneVoice organization.

Israeli media headlined the poll as showing support for a PA state, but the backing is in effect only in principle. The poll was carried out for OneVoice by the widely-known Dahaf Institute and Irish scholar Colin Irwin following the Operation Cast Lead counterterrorist campaign.

Although 78 percent of the Israeli respondents back the “two-state solution,” nearly the same amount – 77 percent – are against dividing Jerusalem and allowing the PA to use it is a capital for a new Arab nation.

The survey also shows wide gaps in priorities, with almost all of PA Arabs stating that a new state and the right of foreign Arabs to move to Israel are top priorities, while a new PA state is only the 11th most important priority for Israelis. In addition, virtually every Israeli political leader and a vast, majority of Israeli reject the demand for the immigration of Arabs who claim to be descendants of Arabs who used to live in Israel.

All of the PA Arabs who were polled think that all Jewish communities in Judea and Samaria should be destroyed while only 26 percent of Israelis agreed. Nearly two thirds of the Israelis also reject meeting the PA demand for returning to the 1949-1967 borders,

The only agreement between the Israelis and Arabs was on the shared opposition to a single bi-national state.
Posted by Unknown at 4:12 AM