Ilan Halimi was Murdered BECAUSE he Was a Jew. France Wimps Out and Holds Trial Behind Closed Doors. 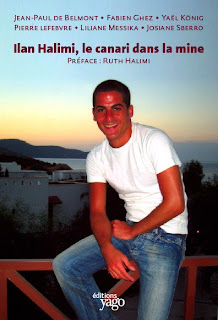 I hope that France will not turn to their overused and fake excuse that “it wasn’t because he was Jewish” to let these lower-than-dirt murderers to walk away with a slap on the wrist. Obviously, they attacked Ilan Halimi BECAUSE he was a Jew. The gang leader clearly stated that they singled him out because his family is Jewish.

They tortured him because he was Jewish.

Just wait. The French government is already setting up their release of these killers with almost no time served. They will allow a thousand excuses for how a young Jewish man was lured, tortured, and killed--and they will end up blaming the victim for the crime of being Jewish in France.

They are holding the trial behind closed doors because two of the defendants are “minors”?

Who cares if they are “minors”?

They were adult enough to kill.

They were adult enough to torture and to watch torture.

They were adult enough to dispose of this young man by the side of the road as if he were nothing but trash.

Every one of these murderers deserve death themselves.

May they live their entire lives behind bars, miserable and alone.

Show them the same mercy they showed Ilan: none.

A French court is holding a closed-door trial for the gang of 28 alleged torturers and murderers of 23-year-old-Ilan Halimi in 2006 because two of the defendants are minors. The case has raised the specter of increasing anti-Semitism in France, with the defense attorneys arguing that the leader of the “Gang of Barbarians” may not have kidnapped and murdered Halimi simply because he was Jewish.

Investigators concluded that Halimi was singled out after the gang leader, 29-year-old Yousef Fofana, assumed his family was wealthy because he was Jewish. Fofana is a French citizen from the Ivory Coast, where he had fled after the crime and was arrested and extradited.

The brutal murder haunted France after it was revealed that Halimi was tortured for three weeks before his naked, stabbed and repeatedly burned body was dumped on the side of a road. He was found handcuffed. His family buried him in Israel, where his mother wrote in a book that the murderers “never will be able to hurt him anymore.”

Ruth Halimi, addressing the murderers, wrote in her book about her ordeal, “I took him away from here because one day you will be free and you would have been able to come and spit on his tomb.” Anti-Semitism, including violent attacks on Jews and desecration of graves, has risen sharply throughout the entire world, and French Jews have reacted with an increase in immigration to Israel (aliyah).

French law allows trials of juveniles to be conducted in public in certain cases. “A public trial would have helped better understand the criminal machine, to make parents and teenagers reflect. It’s the law of silence that killed her son; it would be unbearable for the trial to remain silent," according to Halimi’s lawyer.

Investigators of the crime discovered that Halimi had been the victim of taunts prior to the kidnapping. His sister Anne-Laure related that gang members called him "Osama” and that during ransom negotiations with his family, they sang verses from the Koran over the telephone.

The kidnappers lured their victim by using a young Jewish woman with whom he worked as a phone salesman. She told several friends about the kidnapping, but no one informed the police. The father of one of the gang members also told his son to remain quiet after they discussed the crime.

The kidnappers eventually demanded $1 million in ransom but apparently decided to end the grisly episode by killing him.

Fofana allegedly had previously tried to kidnap Jews for money. His “Gang of Barbarians” included blacks, Arabs and Portuguese and French whites.
Posted by Unknown at 2:33 AM