Blood Libels and the TEA Party Poster, (a.k.a How One Anti-Semite Can Destroy An Entire Grass Roots Movement) 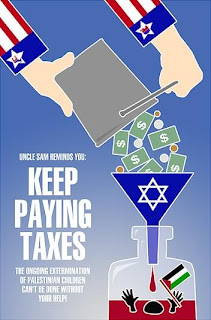 First, before I start writing further, I want to thank Adam Holland for bringing the whole issue to light in his blog. There is where I found the horrible graphic used by the Ron Paul supporter to promote the TEA party in San Mateo because that graphic had suddenly disappeared from public view. Thanks to Adam for keeping the site information for perpetuity by publishing it on his blog!

If you're Jewish you have to know.

But, if you don't know, let me fill you in. Blood libels were used by xtians and arabs throughout history in order to scapegoat the Jews. Blood libels accused Jews of kidnapping young children and sacrificing them during Passover (which, of course, never happened as it is against every religious belief, religious law, and tradition of the Jewish people. We don't even touch animal blood, let alone human!).

Blood libels resulted in the torture, murder, and destruction of hundreds of innocent Jews and the destruction of numerous Jewish communities from the 12th century until today. The newest blood libels are prevelent in the arab press, and are usually directed at Israel.

So, it was especially relevant that Ron Paul Supporter, Kathy McGrade, decided to use the ancient practice of blood libel to promote her TEA party at the Hillsdale Mall on April 15. Oh, did I mention that April 15 also happens to be on Passover?

Now, I have nothing against the TEA parties; in fact, if the TEA parties hadn't been held on the second night of Passover, I would have been there--but this graphic, used to promote the TEA party in San Mateo shows how it just takes one crazy wacko to destroy an grassroots movement.

This particular crazy wacko, Kathy McGrade, posted her graphic on the TEA party website as she tried to recruit attendees.

Now it has hit the California Republican Party, who registered their disgust with Ms. McGrade's artistic expression. However, the ADL has yet to ring in on the controversy.

So, today I reported the whole thing to the San Francisco ADL office. Let's see if they do anything.

I hope they do.

The poster promoted the April 15 rally in San Mateo, a Silicon Valley city 20 miles south of San Francisco. It showed a bucket of dollars and coins pouring through a funnel emblazoned with a Star of David. The money was transformed into a pool of blood in which a figure holding a Palestinian flag was drowning.

“Uncle Sam Reminds You: Keep Paying Taxes,” the image read. “The ongoing extermination of Palestinian Children Can’t be Done Without Your Help.”

Sen. Leland Yee, a Democrat from San Francisco whose district includes San Mateo, criticized the image as an “obscene use of race-baiting.”

“This incendiary act must not go unchallenged,” he said in a statement.

State GOP Chairman Ron Nehring also condemned the imagery, which he said detracted from an important protest over government spending and taxes.

The so-called tea parties were organized by FreedomWorks, a Washington-based conservative advocacy group.

Nehring blamed the online poster on “fringe” elements who “are attempting to use the taxpayer movement to promote their own cause.”

“In this case, that fringe cause is anti-Semitism,” he said in a statement earlier this week. “To allow such actions to continue or succeed threatens the entire taxpayer movement by giving its opponents the opportunity to paint the whole movement as racist or extreme.”

The poster was on the “Bay Area Ron Paul Campaign for Liberty” Web site but can no longer be viewed publicly.

The organizer of the Web site where the poster appeared, Kathy McGrade, said no offense was intended, but she defended the underlying political view.

“While the image was provocative, it represents a point made by many people before: U.S. financial aid for the Israeli government which comes from U.S. taxpayers, funds the harsh handling, and sadly, the death of innocent Palestinians,” she wrote in an e-mail exchange with the Associated Press.

The poster was on a Web site titled “Bay Area Ron Paul Campaign for Liberty” but can no longer be viewed publicly. McGrade said the site is not officially associated with Paul.

Rachel Mills, a congressional spokeswoman for U.S. Rep. Ron Paul of Texas, a former Republican presidential candidate, said she could not comment and referred calls to Paul’s Campaign for Liberty.

“We don’t have anything to do with them and we don’t abide with that sort of imagery,” said Jesse Benton, spokesman for the Alexandria, Va.-based group. He said the campaign’s lawyer was sending McGrade a “cease and desist” letter.
Posted by Unknown at 8:32 PM