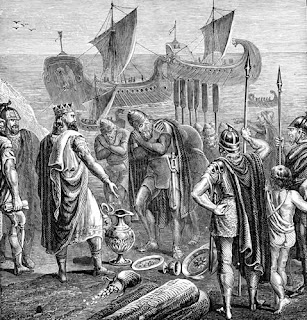 For over sixty years, there has been a bitter dispute over the unwillingness of most Muslims and Arabs to accept the legitimacy and permanence of Israel as an independent Jewish State in the Middle East. In this connection, Yasser Arafat and Mahmoud Ahmadinejad have denied that the Jews are a People within the context of the modern political and legal doctrine of the self-determination of Peoples. However, there is an enormous body of archaeological and historical evidence demonstrating that the Jewish People -- like the Greek People or the Han Chinese People -- is among the oldest of the world's Peoples.

Thus, it is well known that the Jewish People has more than 3,500 years of continuous history, with a subjective-objective national identity that, in each century, has kept a link to the land between the Jordan River and the Mediterranean Sea. For example, the Jewish Bible, the Christian Gospels and the Koran all specifically testify to the connection between the Jewish People and its historic homeland.

Thus, the Jewish People is aboriginal to Israel in the same way that, in Canada, certain First Nations are deemed aboriginal to their ancestral lands. And, it is noteworthy that the Supreme Court of Canada has decided that, where aboriginals maintain their historical connection with the land, aboriginal title can survive both sovereignty changes and influx of new populations resulting from foreign conquest.

In this regard, it is essential to recognize that the Middle East has always had a significant Jewish population, including some Jews who, in each century, continued to live west of the Jordan River. Today, many of the sons and daughters of these Middle Eastern Jews are citizens of Israel, where they have been joined by Jews from many other countries. Though some Western thinkers are now uncomfortable with the idea of a nation-State as the homeland of a particular People, that is no reason to target Israel, because the overwhelming majority of modern States are the homeland of a particular People, e.g., Japan, Italy, or the twenty-one countries of the Arab League.

Israel and thirty-odd modern countries are all successor States of the Muslim Ottoman Empire which for four hundred years (1516-1920) was the principal Power in the Near and Middle East. Apart from the ruling Turks, the Ottoman population was composed of several large ethnic groups, including Greeks, Armenians, Kurds, Arabs and Jews. For centuries, these Jews lived in large numbers in a variety of Ottoman venues -- including Constantinople, Salonika, Cairo, Alexandria, Damascus, Aleppo, Mosul, Baghdad, Basra, Tiberias, Hebron, Safed, Jaffa and Jerusalem.

In late October 1914, the Ottoman Empire opted to enter the First World War to fight against the United Kingdom and its Allies. As the fortunes of war began to favour the British Army, the United Kingdom Government addressed the question of what to do with the multi-national Ottoman lands both in the light of current British interests and the nineteenth-century liberal doctrine of the self-determination of Peoples. In this regard, the father of modern political Zionism, Theodor Herzl, in his 1896 manifesto The Jewish State, had already proclaimed that Jews, though living in many different places around the globe, constitute one People for the purpose of self-determination.

In October 1917, the British Cabinet adopted, as a declared war aim, the creation of an entirely new country called “Palestine” to serve as “a national home for the Jewish People.” This was done to help realize the Jewish People’s self-determination on its ancestral lands; to shore up Jewish support for the Allied war effort in revolutionary Russia and the USA; and to help the British better cover the eastern flank of the Suez Canal, which was then the crucial gateway to British India. The intention to create this Jewish-National-Home Palestine was announced to the world in the November 1917 Balfour Declaration.

As Great Britain worked to defeat the Ottoman Turks, the world also began to learn about the national claims of the Arab People. Here recall the wartime exploits of Lawrence of Arabia and the Hashemite Prince Feisal ibn Hussein, both of whom were present at the 1919-1920 Paris Peace Conference. There, a powerful international searchlight was trained on the self-determination of Peoples, including the claims of the Arab People.

However, no one there had ever heard anything about a distinct Palestinian Arab People. Had there then been such a distinct Palestinian Arab People, Prince Feisal, USA President Woodrow Wilson, France’s Prime Minister Georges Clemenceau, British Prime Minister David Lloyd George and others would have known about it. This assessment is confirmed by extensive local testimony and petitions collected, in 1919, by the USA King-Crane Commission which told President Wilson that Arabs around the Jordan River specifically rejected any plan to create a new country called Palestine. To the contrary, local Arabs then enthusiastically sought creation of a new, unitary Arab State matching the then Ottoman Province of Syria, which for centuries had included modern Syria, Lebanon, Jordan and Israel.

The 1919-1920 Paris Peace Conference was concerned with the task of accommodating the political interests of the victorious Allied and Associated Powers with the claims to self-determination of well-known Peoples which had long histories of national self-affirmation and bitter suffering under foreign oppression. Thus, considered were difficult and entangled issues touching the self-determination of such famous Peoples as the Chinese, the Poles, the Germans, the Finns, the Letts, the Latvians, the Estonians, the Czechs, the Slovaks, the Serbs, the Slovenes, the Croats, the Italians, the Hungarians, the Romanians, the Bulgarians, the Greeks, the Turks, the Kurds, the Armenians, the Arabs and the Jews. In this larger context, just one decision among many was creation of an entirely new country called “Palestine” as “a national home for the Jewish People”.

The international decision to establish “a national home for the Jewish People” was the sole rationale for the 1922 creation of Jewish-National-Home Palestine which, under the aegis of the League of Nations, was administered by the British until May 1948, when Israel declared independence. Decision-makers at the 1919-1920 Paris Peace Conference knew that Jewish-National-Home Palestine would initially lack a Jewish majority population. However, the international decision to create Palestine “as a national home for the Jewish People” was made not so much on the basis of local demographics, but in recognition of the Jewish People’s aboriginal title and continuing links to the land around the Jordan River, as well as with regard to broader considerations of demography, history, politics and social justice that were both global and Middle Eastern. Thus, there was a conscious choice to refer -- not just to the 85,000 Jews then living locally -- but also to the past, present and future of 14 million Jews worldwide, including the one million Jews then living in the Near and Middle East.

Failure to create Jewish-National-Home Palestine would have meant denying the Jewish People a share in the partition of the multi-ethnic Ottoman Empire, where Jews had lived for centuries, including some west of the Jordan River. Failure to create Jewish-National-Home Palestine would also have meant that the Arab People would have received almost the whole of the Ottoman inheritance. That result would have been unacceptable to David Lloyd George, Woodrow Wilson and their peers, because they clearly understood that the claim to self-determination of the Jewish People was no less compelling than that of the Arab People.

The Paris decision-makers strongly believed that they had also done justice to the claims of the Arab People whom they had freed from 400 years of Turkish rule and helped on the road to independence via the creation or recognition of almost a dozen new Arab States on territory that had formerly belonged to the Ottoman sultan.

Thus, deep into the 20th century, Arab leaders themselves failed to recognize the right to self-determination of a distinct Palestinian Arab People. For example, as principal Arab leader at the 1919-1920 Paris Peace Conference, Prince Feisal specifically accepted the plan to create Palestine as “a national home for the Jewish People” and his father, the Hashemite King of the Hedjaz (later part of Saudi Arabia) was party to the 1920 Sevres Treaty that explicitly stipulated that the newly-created Palestine would be “a national home for the Jewish People.”

And, decades later, the governments of Egypt and Jordan showed how little regard they had for the self-determination of a distinct Palestinian Arab People; first, by rejecting the 1947 UN plan to partition Jewish-National-Home Palestine into two new independent States, the one Jewish and the other Arab; and second, by themselves failing to create a new Palestinian Arab State, between 1949 and 1967, when Egypt held the Gaza Strip and Jordan administered East-Jerusalem and the West Bank.

Now living in South China, Allen Z. Hertz was formerly a senior advisor in the Privy Council Office serving Canada's Prime Minister and the federal cabinet. Earlier he taught history and law at universities in New York, Montreal, Toronto and Hong Kong. Allen was born in Montreal, where he studied history and languages at McGill University. He later did graduate work in European and Ottoman history at Columbia University and subsequently earned law degrees from Cambridge University and the University of Toronto. His daughters Tamar and Robyn live in Montreal.
Posted by Unknown at 8:15 AM