Why not fill the Hevron with a large contingent of armed terrorists? What could be wrong with that? 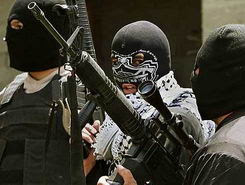 Great. Just great. This is exactly the message we want to send to the terrorists: “Attack our yeshiva boys, desecrate our Holy Places, and we will reward you with control over the the second most important city in Israel.”

Why not? Israel seems to be having a fire sale of all it’s property. Let’s give a chunk of it to an increasingly hostile Russia, a swath to the hate-filled Catholic Church.

Why not fill the Hevron with a large contingent of armed terrorists? What could be wrong with that?

Israel is backing a bid by the Palestinian Authority to reassert control over Hebron, a senior Palestinian defense official told Ynet on Monday evening. According to the official Israel has authorized the request made by the PA to deploy security forces in the West Bank city as part of the effort to push back Hamas, which is poised to seize control there.

At present time Israel has yet to confirm such an agreement.

According to the source the deployment will be carried out as soon as next week, around October 15th. The Palestinian force will be comprised of more than 1,000 armed men. Israel has so far authorized the deployment of 250 members of the Presidential Guard and an identical number of police officers. The PA is hoping to add another 500 troops from the national force.

The unique force will be tasked with battling Hamas' extensive political efforts, which have been picking up speed as the Palestinians head to the ballots in early January to replace President Mahmoud Abbas, whose term is ending. Palestinian Prime Minister Salam Fayyad's is concerned Hamas will take advantage of the unrest pervading the streets during the elections.

The Palestinian request was communicated through discreet channels to senior diplomatic figures in Jerusalem. The proposal was also discussed in Fayyad's meetings with US Special Envoy for Middle East Security, General James Jones.

Fayyad pointed to Hebron as the city most likely to fall into Hamas' grip. The Islamic movement, which seized control of the Gaza Strip in a bloody coup last year, poses a threat to the Palestinian Authority's rule in the West Bank.

"It is clear that these security operations are intended to oppress Hamas, but they will only bring about the opposite," he vowed.

Hamas: We'll replace Abbas
Meanwhile Hamas said it would cease to recognize Abbas as Palestinian president when his term ends on Jan. 8th and replace him with one of its own leaders, according to a resolution approved by the Islamic movement's legislators Monday.

The Hamas resolution demands that Abbas issue a decree by Wednesday to hold new presidential elections within three months. Abbas aides said the resolution appeared aimed at stepping up pressure on the president, a political moderate, ahead of a new attempt by Egypt to mediate a power-sharing deal between the two rival camps and is certain to deepen the split between Hamas and Abbas' Fatah movement.

"I believe Hamas is coming to this point just to undermine the national dialogue before it starts in Cairo," said Abbas aide Nimer Hamad referring to the Egyptian-brokered talks, expected to start next month.

If Abbas does not step aside in January, Hamas says it will install deputy parliament speaker Ahmed Bahar of Hamas as Abbas' temporary successor until elections are held.

The job would normally go to the parliament speaker, Abdel Aziz Dueik, but he is in an Israeli jail, along with scores of other Hamas lawmakers from the West Bank. Bahar said Monday he would accept the job, if asked.

The resolution left a loophole, suggesting that Abbas' term could be extended by parliament if deemed to be in the "national interest."
Posted by Unknown at 10:59 PM