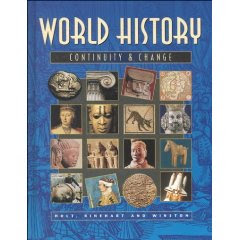 So, I guess my idea that the tests are a way to get hold of the next generation and make sure the teachers teach what the liberal establishment wants them to believe may not be that far off, right?

In order to pass their classes and their standardized tests, your kids have to swallow this stuff whole and regurgitate it on command. Nice, huh?

Visit Fairtest.org and open your eyes!!

American elementary and high school textbooks contain many "gross misrepresentations" of Judaism, Christianity and Israel, according to a book-length study released this week by the San Francisco-based Institute for Jewish and Community Research.

"It is shocking to discover that history and geography textbooks widely used in America's elementary and secondary classrooms contain some of the very same inaccuracies about Christianity, Judaism and the Middle East as those [used] in Iran," the IJCR said in a summary of the findings of the five-year study.

In examining the 28 most widely-used history, geography and social studies textbooks in America, researchers Dr. Gary Tobin and Dennis Ybarra found some 500 instances of "errors, inaccuracies and even propaganda" on these issues. Tens of millions of schoolchildren in all 50 states use the textbooks, according to Tobin.

Among the "outrageous misrepresentations" the study found was "a denial of the Jewish roots of Jesus," as when the textbook The World relates that "Christianity was started by a young Palestinian named Jesus."

"Textbooks include negative stereotypes of Jews, Judaism and Israel," the authors write. "For example, textbooks tend to discredit the ties between Jews and the land of Israel."

According to Tobin, "you're much more likely to learn about Jewish terrorism before the founding of Israel [in the textbooks] than about terrorism against Israel since that time."

Among the claims made about Israel in some of the textbooks are that Arab countries never initiated wars against Israel, Arab nations desire peace while Israel does not and that it was Israel that placed Palestinians in refugee camps in Arab lands, not Arab governments. No mention whatsoever was found relating to the hundreds of thousands of Jewish refugees from Arab countries who were forced out after the establishment of Israel.

In their treatment of Judaism, too, the textbooks showed a negative bias, according to the study. They often expressed a view that "Jews and Judaism are legalistic," and that "Jews care only about the letter of the law and ignore its spirit," the study found. The Jewish God is presented as "stern and warlike," and not compassionate, as is highlighted in other religions. In some instances, Jews are charged with deicide in the killing of Jesus.

The study also found that 18 textbooks used "unscholarly and disparaging 'Old Testament' terminology for the Jewish scriptures when discussing the origins of Judaism."

The study compared language used in describing Jewish and Christian belief with that describing Muslim belief. "The textbooks tend to be critical of Jews and Israel, disrespectful about Christianity, and rather than represent Islam in an objective way, tend to glorify it," says Ybarra.

"Textbook publishers often defer completely to Muslim groups for their content [on Islam] because they want to be sensitive to Muslim concerns," he explained. "So they write that Mohammed is a prophet of God, without the qualifier you should have in a public school that shows you're teaching about religion, rather than teaching religion."

One example among the many cited in the study is in World History: Continuity and Change, in which a glossary entry on the Ten Commandments describes them as "Moral laws Moses claimed to have received from the Hebrew God Yahweh on Mount Sinai."

The same glossary describes the Koran as a "Holy Book of Islam containing revelations received by Muhammad from God" - without a conditional qualifier.

"Islam is treated with a devotional tone in some textbooks, less detached and analytical than it ought to be," the study finds. "Muslim beliefs are described in several instances as fact, without any clear qualifier such as 'Muslims believe... .'

"No religion should be presented in history textbooks as absolute truth, either on its own or compared to any other, or they all should be."

"All in all, there are repeated misrepresentations that cross the line into bigotry," the authors write.

The textbooks examined in the study are published by some of the largest publishers in America, including Pearson, an $8 billion dollar company which is one of America's largest textbook publishers, and Houghton Mifflin Harcourt Publishing Company, a global corporation with revenues totaling some $2.5 billion.

The publishers, however, are not bigots, Tobin emphasizes. "I learned in graduate school that you should never try to explain something with conspiracy when you can account for it with incompetence," he says. "That's what you've got here. The fact that publishers don't use scholars to write the textbooks, but amateurs," is a major source of the bias in the texts.

"If the person writing about the founding of Israel isn't an expert in the field - and he's not - he'll go to whatever sources he can find, such as Google. Any misinformation he finds can get into the textbooks."

The lack of expertise among the writers is only one of the many "systemic ills" the study found in the textbook publishing process. "Developing a textbook and getting it adopted in the major states of Texas and California is so expensive that only those competitors with the deepest pockets stand a chance of succeeding. Only three mega-publishers (down from nine in less than twenty years) control the K-12 textbook market, meaning that more and more titles are concentrated in fewer hands. Errors in one book now stand a greater chance of replicating themselves across other books because they may originate from the same source."

These structural weaknesses leave the textbook industry susceptible to pressure from certain groups. "We do not believe that textbook publishers are 'out to get' anybody or any group," the authors note in the study. Rather, "they are subject to all kinds of external pressures so that the higher pursuit of truth and accuracy can be sacrificed to narrow interests."

"Arab and Muslim interest groups... promote a pro-Arab, pro-Palestinian agenda in textbooks' lessons on the Middle East," the study finds. "For example, the Council on Islamic Education has weighed in during adoption processes to oppose the direct and unconditional use of the term 'Israel' for the Israelite monarchy in textbooks, lest anyone make the connection between modern Jews' claims to Israel and the kingdom that existed in the same location 3,000 years ago."

Says Tobin: "If the president of Iran wants to blast Israel at the UN, he can use American textbooks to do so."
Posted by Unknown at 6:11 AM