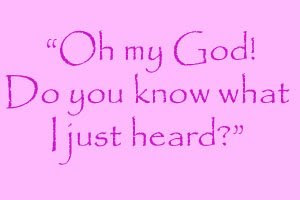 Gossips and Slanderers: How to Stop Them
September 13, 2008
http://www.jewishideas.org/angel-shabbat/gossips-and-slan
by Rabbi Marc D. Angel

This week's Torah reading commands us to remember what God did to Miriam while the Israelites were in the wilderness. This refers to Miriam's (and Aaron's) sin of speaking against their brother Moses. As punishment for their evil talk, Miriam (who apparently bore most of the guilt) was stricken temporarily with leprosy. Rabbi Abraham Ibn Ezra notes the correctness of the rabbinic interpretation linking the word metsora (leprosy) with the phrase motsi shem ra (slandering the reputation of another person).

The Torah calls upon us to remember how serious is the sin of slander, and how even the greatest people e.g. Miriam and Aaron, could succumb to this sin.

In spite of the Torah's strong condemnation of gossip and slander, many people--including those who consider themselves to be religious-- engage in these things regularly and enjoyably. They badmouth those with whom they disagree; they repeat (or fabricate) negative comments about others; they look for failings in others and are only too quick to share this gossip with friends and neighbors. The sins of gossip and slander have gained new impetus in our technologically advanced age: people can now use the internet to smear the reputations of others, thereby reaching countless people with their malicious remarks.

The gossips and slanderers engage in the most serious of religious transgressions, polluting their own souls while they try to pollute the souls of others to whom they spread their evil talk. These gossips and slanderers are obviously not dissuaded from their evil practices by the words of the Torah, or the words of the Talmud and rabbinic tradition. They somehow think that they are above these laws and ethical dictates.

If they do not have enough self-control to stop their gossiping and slandering, how can we stop this terrible phenomenon within our community?

The answer is: don't listen. If the gossipers and slanderers have no audience, they will be howling into the wind. They will gain no emotional satisfaction from their sins--and they will eventually repent.

The answer is: when anyone starts telling you some gossip or slander, ask him/her to stop; tell him/her that you are not interested.

The answer is: if anyone sends you an inappropriate email, delete it immediately. If anyone's website or blog contains evil talk, email the author and voice your dissatisfaction.

The answer is: stand up for the victim of slander and gossip; defend him/her against the oppressors.

I used to receive mailings from an organization of so-called religious Jews who claimed to represent authentic Orthodox Judaism. Their mailings were filled with scathing attacks on those with whom they disagreed. I asked them not to send me their mailings, but they did not respect my request. When I subsequently received mailings from them, I returned them unopened, with the following message written in red ink on the front of the envelope: "Return to sender, obscene material." They soon removed me from their mailing list!

If we take offense at the sins of slander and gossip, as we should, then we each need to do our part to root these things out of ourselves and out of our society. Malicious words cause spiritual "leprosy" not only to those who speak them, but to those who listen and encourage.

Please support the work of THE INSTITUTE FOR JEWISH IDEAS AND IDEALS (www.jewishideas.org) and help foster an intellectually vibrant, compassionate and inclusive Orthodox Judaism.
Posted by Unknown at 5:05 AM