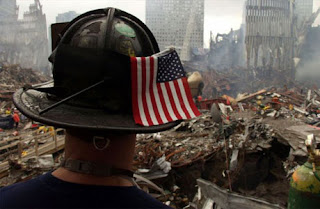 B"H
G-d Bless the Congress of the United States of America, and the voters who had enough of Obama's crazy ideas and voted in strong conservatives!
The murderers of more than 2,976 people are being tried in a Military Tribunal (the appropriate place for a war crime)!
Attorney General Eric Holder is crying over the fact that "his hands were tied" by the congress (Thank G-d!!).
Cry on, Eric.  Your loss is a victory for sanity and a promise for some measure of justice for the families of those murdered on 9/11/2001.
May Justice prevail!  May those who are guilty PAY for their crimes.
M
-----
Holder Blames Congress for Forcing Hand on Military Commissions for 9/11 Detainees
http://www.foxnews.com/politics/2011/04/04/khalid-sheikh-mohammad-military-commission-trial/
Khalid Sheikh Mohammed

Congress tied the Obama administration's hands in trying the alleged mastermind of the Sept. 11,  2001, terror attacks and his accomplices, Attorney General Eric Holder said Monday, announcing that he was left without a choice and has referred the cases to the Defense Department for trial.


In stark language, Holder lambasted Congress  for imposing restrictions blocking any detainees from being tried in the U.S., saying that the "unwise and unwarranted restrictions" undermine the U.S. in counter-intelligence and counter-terror efforts.

Expressing his disappointment in no uncertain terms, the attorney general said that as a native New Yorker, he knows as well as anyone the federal court's capacity to try the suspects. He added that he's intimately familiar with the cases, much more so than congressional members -- or the public -- who opposed allowing the cases to be held in the United States.

As a result, Holder said Khalid Sheikh Mohammed, who has been incarcerated in Guantanamo Bay, Cuba, since 2006, after being captured in Pakistan in 2003, and four alleged Sept. 11 co-conspirators will face prosecution by a military commission in Guantanamo.

"Prosecutors from both the Departments of Defense and Justice have been working together since the beginning of this matter, and I have full faith and confidence in the military commission system to appropriately handle this case as it proceeds," Holder said.

"Because a timely prosecution in federal court does not appear feasible, the attorney general intends to refer this matter to the Department of Defense to proceed in military commissions," reads the order to dismiss signed by U.S. District Judge Kevin Duffy.

The decision to return the detainees to a military commission is a reversal from Holder, who announced in November  2009 that he would move the trials to a civilian court in the United States. Supporters said it sent the right message to the rest of the world that U.S. courts were the fairest and best venue for trials.

"The president's primary concern here is that the perpetrators ... of that terrible attack on the American people  be brought to justice as swiftly as possible and as fairly as possible," Carney said before Holder's remarks.

After Holder's original announcement, attempts to place the suspects in a New York City courtroom were met with fierce resistance from area residents who said they didn't want to deal with another possible terror threat in downtown Manhattan that the case would bring. A potential plan to house the suspects in a prison in Thomson, Ill., also faced considerable scrutiny.

During the lame-duck session last December, Congress acted to prevent the federal trials by attached to a temporary spending bill provisions that prohibited detainees from being brought to  trial in the United States.

Family members of the victims said they were pleased with Holder's decision despite his reasoning.

"I am frankly shocked by the attorney general's comments," said David Beamer, the father of Todd Beamer, who is credited with preventing United Flight 93 from hitting its target. The plane instead crashed in a field in Shanksville, Pa.

"I guess one of my reactions is is I'm thankful there are three branches of government because the last thing I  want to see is KSM returning to New York City for a civilian trial," Beamer said.

Debra Burlingame, head of 9/11 Families for a  Safe and Strong America, said the group is "relieved" Obama "abandoned his plan" to bring the conspirators to U.S. soil.

"We are grateful to the president for reversing his decision, conveyed to the families just last month, to go forward with civilian trials and seek repeal of congressional legislation that stripped funding for that effort," said Burlingame, whose brother was the pilot aboard American Airlines Flight 77, which was forced into the Pentagon on Sept. 11.

"We have great confidence in the military commissions legal framework, which is fair, lawful, effective and consistent with our tradition and values as a nation," she said.

New York Sen. Chuck Schumer, a Democrat, said that the military commissions are the appropriate place for the trials.

"This means with certainty that the trial will not be in New York. While not unexpected, this is the final nail in  the coffin of that wrong-headed idea," Schumer said.

"There is a reason this system is condemned:  it is rife with constitutional and procedural problems and undermines the fundamental American values that have made us a model throughout the  world for centuries. Attorney General Holder's previous decision to try  the 9/11 defendants in federal court was absolutely the right call but this flip flop on the part of the Obama administration is devastating for the rule of law and greatly undermines America's standing abroad," Romero said.

J.D. Gordon, a former Defense Department spokesman for secretaries Donald Rumsfeld and Robert Gates, said trusting the civilian jury with some of the most dangerous terror suspects "is really a flawed mistake." Gordon noted that Mohammed and the other co-conspirators were already going through the military commission process before the Obama administration halted the case.

"I think they ran into the buzz saw of reality where the American public didn't see it in their best interest to hold Khalid Sheikh Mohammed in a civilian trial where he could theoretically be acquitted there and also where he'd have a chance to have his rhetoric used against us," Gordon said.

With the case now returning to the military commission, the process will start all over again. After the administration announced in 2009 it planned to move the trials to federal court, the military withdrew its charges without prejudice -- an  action that effectively allowed it to preserve its legal position so that if the cases returned to the commissions in the future, the men could be charged again.

"The United States has a long history of successfully utilizing military tribunals dating back to the American Revolution, and it's why Congress set up the military commission process. Instead of taking this opportunity to blame Congress for preventing the 9/11 terrorists from having civilian trials, the administration should assure Americans that it will keep all terrorists off U.S. soil and utilize the military commission process in Guantanamo Bay to its full extent," Grassley said.

As the Justice Department prepared to announce its reversal, the U.S. Supreme Court on Monday also decided to pass on a case that would have further determined the legal rights of the detainees kept at Guantanamo Bay.

The justices turned away a petition asking them to establish the standards of evidence lower court judges should use to determine if the detainees can remain locked up while waiting for  their cases to be heard.