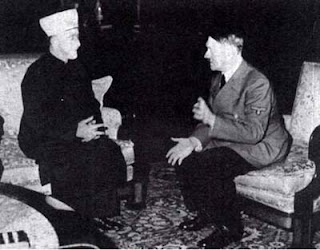 B"H
This knowledge has been hidden too long in the name of "politically correctness." It is very significant, obvious, and historically appropriate information that every person needs to know.  The Islamo-Facist-Nazi connection that began in World War II has been alive and present the whole time--even when our sociologists, historians, cultural anthropologists, politicians, and pundits wanted to look the other direction (see this excellent article about the "taboo" of discussing this issue from the Wall Street Journal.)
It starts with our own people, refusing to include this history in the US Holocaust museum and in the material provided for Holocaust education all over the world.  We can't deny a history that exists.  We can't wish it away.  We can't ignore it.
It is there, it is present, and if we don't acknowledge this very obvious aspect of the Islamist "revolutionary" dream, we will never understand the truth behind their great wish to make Israel a Muslim country.
Arafat wanted to realize his Uncle's dream to be the supreme ruler of Israel, and he passed that sick dream to Abbas and to Hamas and Hezbullah and all the other poor sucker arabs who call themselves "Palestinians."  They think if they control Israel, they can destroy Judiasm and the Christianity and spread Islam to every corner of the world.
This article shows how the US government has known the murderous intent of the arabs to kill all the Jewish inhabitants of Israel in World War II, and how that murderous intent has not faded in the present day.
It is high time that our own people realize this history.  Once we have acknowledged it, then we can make sure that others understand.
M
-----
‘Nazism, Islam shared common enemies - the Jews'
Nazis  promised grand mufti of J'lem Haj Amin al-Husseini leadership of Palestine after slaughter of its Jews, according to US report.
By JORDANA HORN


NEW  YORK – A newly released report by the US National Archives details the close collaborative relationship between Nazi leaders and the grand mufti of Jerusalem, Haj Amin al-Husseini, indicating that Nazi authorities planned to use Husseini as their leader after their conquest of Palestine.


Husseini  was paid handsomely by the Nazis for his efforts, recruited Muslims for  the SS and was promised that he would be made Palestine’s leader after its Jewish population of 350,000 had been murdered.

The report, Hitler’s Shadow: Nazi War Criminals, US Intelligence and the Cold War, was prepared on the basis of thousands of documents declassified under the 1998 Nazi War Crimes Disclosure Act.

“Hitler’s Shadow” is an addendum to a 2004 US government report, US Intelligence and the Nazis.

The new report’s authors, Norman J.W. Goda of the University of Florida and Richard Breitman of American University, said the addendum was particularly important.

“We thought the information was significant and detailed,” Breitman told The Jerusalem Post regarding the newly uncovered facts on the Jerusalem mufti in particular.

“We  thought the April 1945 contract between the [German] Foreign Office and  Husseini was striking evidence of an ideological collaboration both sides hoped would continue after the war.”

Husseini, who died in Beirut in 1974, was apparently paid 50,000 marks per month, and 80,000 additional marks a month for living expenses, according to a contract with the Germans. This was a time when a German field officer typically earned 25,000 marks a year.