Jew Goes Under-Cover as Neo-Nazi, Tricks Notorious Nazi Into Giving Up Evidence for His Conviction 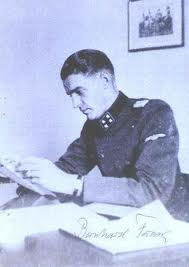 B"H
A big thanks to the American Jew, Mr. Mark Gould, who trapped this horrible, evil man by posing as a neo-nazi and getting the old man to admit his secrets, share his evil diaries, and provide all the evidence needed to convict.
In order to pull this off, this Jewish man of morals and character had to give up his self-respect, risk being shot, and sever ties with his own family and his traditions--all in the name of justice. May the stench of his assumed identity easily wash away, and may Mr. Gould's family know of his sacrifice throughout the generations. May Mr. Gould and those who assisted him be blessed among the Jewish people, and may he write a great book that I would love to read!!
I thought it was especially sweet that Mr. Gould was able to be present when the horrible, evil, despicable nazi, Bernhard Frank, was arrested.  I am so glad that Frank was not allowed to die in peace.  He will die knowing that every cent he made, his home, his savings, his businesses and land holdings--everything he ever touched--will be taken from him and his family forcibly by the courts.
He will die knowing that everything he ever had will be used for the benefit of Jews, and that instead of his assets going to his children and his grandchildren, it will, instead, go to the children and grandchildren of his victims.
Happy Hannukah!
M

BERLIN  - He was a senior assistant to SS and Gestapo Commander Heinrich Himmler, and befriended Adolf Hitler as well. He was responsible for signing the first order of the Reich instructing the mass murder of hundreds of thousands of Jews, later turning into the Nazi systematic extermination machine.

But for the past 65 years since the end of World War II, Dr. Bernhard Frank managed to hide his direct involvement with the Jewish genocide, walking around freely in Germany and never being prosecuted for his actions.

Now, at the age of 97, he is being exposed for the first time by an American Jew who pretended to be a neo-Nazi.

In the upcoming days a lawsuit is expected to be filed in the United States against Frank, the most senior Nazi criminal still alive today. The suit, which will probably also call for his extradition, will  be filed on behalf of US citizens whose families were murdered during WWII as part of the cruel order signed by Frank. The suit claims he is responsible for genocide, war crimes and crimes against humanity.

One of the prosecutors, a young 43-year-old American Jew by the name of Mark Gould, was actually the one who managed to expose Frank's past. In a special Yedioth Ahronoth interview Gould talks about how he was able to connect the puzzle pieces and uncover the chilling past of an old Nazi criminal.


Gould took advantage of his Aryan looks – tall, blond hair, blue eyes  – in order to get close to the Nazi officer. He impersonated a neo-Nazi  and met with Frank over the years, interviewing him for long hours at a  time, sometimes documenting the meeting on video. This material is likely to serve as legal evidence against Frank during the trial.

Over time, the two developed a trusting relationship, and Frank began to confess to Gould about his SS past.

Frank was responsible for the Nazi language code used by the SS to disguise the 'special treatment' given to Jews during the German occupation of USSR territories. He was also one of the senior officers in charge of consolidating and distributing the racist Nazi ideology.

Frank was selected by Himmler to serve in a special commando unit responsible for SS operations in occupied USSR territories in the summer of 1941. As part of his new position, as Himmler's senior assistant, he was personally responsible for signing the July 28 1941 order called "Comando Stadt Order". This was the first actual SS order instructing to kill hundreds of thousands of Jews, including women and children, preceding the Commissar order. It was the first stage of the massive Jewish extermination process.

At the time, Frank was instructed by Himmler to keep an SS war journal, gathering all reports of SS activities, including the Jewish genocide.


In 1943, Frank was appointed head of security at the SS base of Obersalzberg, the  beloved mountain residence of Adolf Hitler located in southern Germany.

It was then that Frank was given a personal order by Hitler to kill Hermann Göring, a high ranking Nazi officer who announced his intention to take over the German leadership, due to Russia's closure of  Hitler's bunker in Berlin. Frank refused to go through with it, but he did arrest him for treason.

Frank later signed Obersalzberg's surrender letter to the US, hoping he could prevent its complete destruction.

Over the years he wrote books about his service in the SS and gave television interviews, but always made sure to hide any information  regarding his SS service under Himmler.


During one of his long interviews with Gould, Frank said he and Himmler had a great relationship and that the latter loved him very much. Frank went on to say that the SS commander was a "good man."

Frank told Gould that when he was young he had Jewish friends, but that the political events at the time forced him to cut ties with them. He claimed that the Jews played a major role in German oppression and "dug their own graves." Frank added that the war was the outcome of decision made by governments, and the Nazis were only fulfilling their duties.

When the relationship between the two grew stronger, Gould confronted Frank with the extermination orders he had signed. After short hesitation, Frank admitted the signature on the documents was, in fact, his, but claimed he had only approved the linguistic content.

"He defended himself, saying the order was necessary, because Jews in those areas were involved in guerilla warfare against Germans," said Gould in an exclusive Yedioth Ahronoth interview. "In retrospect, we are talking about the first act of genocide by the SS. It was before the trains began making their way to extermination camps. It was also the first actual mass murder test run. The command wanted to see if SS soldiers would murder Jewish citizens, including women, children and elders. Frank was responsible for wording the orders in such a way that the troops on location, especially those who had undergone ideological training, could understand what do to. It was written in the spirit of Reinhard Heydrich (a high-ranking SS official, the first to be in charge  of the 'Final Solution' operation)."

A rifle by his side


"Frank justified the orders, claiming they were given during the war,  when there were a lot of partisan Jews, outlaws and robbers," added Gould. "When asked if the women and children murdered were also partisans and robbers, he shrugged his shoulders and didn't respond. I caught him lying a lot during the interviews. He admitted to some of the  lies. Eventually he let me do anything I wanted with the materials. A rifle was by his side during many interviews, so he could have shot me if he wanted to. When I confronted him I feared what he might do to me or to himself. But my impression was that Frank wished to receive recognition for all the things he had done while serving in the SS. He hid it for so many decades. He was very proud of his actions and the fact that I was able to expose what he had done made him appreciate me. He gave me all the material which could convict him, including private journals, love letters and other documents he had written."

Gould arrived at Frank's house in Frankfurt last weekend to personally deliver the lawsuit against him. Frank's spouse attacked Gould and he needed to get medical attention at a nearby hospital.

"A  civil lawsuit filed against Frank in the US will allow us to make sure a  man doesn't get away with crimes he had committed and not doge the punishment," said the prosecutor, Attorney Nitzana Darshan-Leitner. "Even after his death, the lawsuit will continue for his inheritance and  his family will have to pay the price."