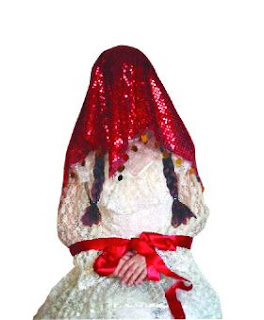 B"H
OK, so the "Poor Palestinian People" are raping and sexually harassing young women who come to "help" them, and when the young women are raped or forced into converting to Islam and marrying a "Palestinian Freedom Fighter," the women are told to not report the crime because they will hurt the "cause."
So, please, tell me . . . what EXACTLY is this "cause" that the women "peace activists" are promoting?
Do they want peace?
Then they shouldn't support terrorists who send suicide bombers, bombs, and armed men who shoot pregnant women in cold blood!
Do they want equality?
Then they shouldn't support misogynists cloaked in religion who treat women like chattel, refuse to allow them to drive, deny them an education, and deny them the right to work to support their families!
Do they want gay rights?
Gays are killed.
Do they want religious tolerance?
Israel is a safe haven for all religions.  Islam only allows Islam.
Do they want justice?
Shariah law does not guarantee equal rights.
So, the only thing left is:
Do they hate Jews?
Supporting "Palestinian Rights" allows you to hate Jews without ever saying it directly!
M
-----

Two activists have exposed a disturbing phenomenon that they say is an open secret within the “peace camp”: female “peace” activists are routinely harassed and raped by the Arabs of Judea and Samaria with whom  they have come to identify. They say the phenomenon has gotten worse lately and that many foreign women end up as wives of local Arabs against their will, but cannot escape their new homes.

Roni Aloni Sedovnik, a feminist activist, penned an article in News1  – an independent website run by respected investigative reporter Yoav Yitzchak – under the heading “The Left's Betrayal of Female Peace Activists Who were Sexually Assaulted.”

“A nauseous atrocity has been going on for a long time behind the scenes at the leftists' demonstration at Bil'in, Naalin and Sheikh Jarrah [Shimon HaTzaddik],” she writes. “A dark secret that threatens to  smash the basic ideological values upon which the demand to end the occupation of the Territories rests.”

It turns out, she explains, that when female peace activists from Israel and abroad come out to Judea and Samaria and demonstrate against the Israeli “occupation,” they are assaulted sexually by the Arab men whom they have come to help. These are not isolated incidents, Aloni-Sedovnik stresses. Rather, this is an “ongoing and widespread” phenomenon that includes verbal and physical abuse. She accuses the 'peace' camp of purposely covering up the trend so as not to offend “the  Palestinians and their heritage, which sees women as sexual objects.”

Media cover-up
Aloni-Sedovnik cites two specific cases which she has knowledge of – one is a case of rape and another is “severe sexual harassment.” The attackers in both cases, she stresses, were familiar with the victims and knew that they were “peace activists.”

The rape occurred several months ago in the village of Umm Salmona, near Bethlehem. The victim, an American activist, wanted to press charges but leftist activists put pressure on her not to do so, so as not to damage the struggle against the 'occupation.'

The second case involved an Israeli activist who took part in the demonstrations at Shimon HaTzaddik neighborhood in eastern Jerusalem, where the High Court ruled that Jewish families may move into homes that  they have owned for generations. This woman filed a complaint with the police but retracted it after “severe and unfair pressure” from the demonstrations' organizers, according to Aloni-Sedovnik. Furthermore, the organizers appealed to demonstrators to dress modestly when they come to the Arab neighborhoods and suggested that they wear head scarves.

Aloni-Sedovnik accuses the Israeli media of complicity in the cover-up.

“How is it that we do not hear the voice of the radical feminists who repeat, day and night, that occupation is occupation, and it does not matter if it is a nation that is doing the subjugation, or a man who is subjugating a woman?

"It appears that there is a gap between the radical-leftist feminist theory about the active resistance to the occupation of the Territories,  and the stuttering self-annulment in the face of the violent conquest of women.”


The Umm Salmona case was reported in Haaretz <http://www.haaretz.com/blogs/mess-report/mess-report-are-the-palestinians-silencing-the-attempted-rape-of-u-s-peace-activist-1.301905>  as an attempted rape but does not seem to have made it beyond the blog pages.

Foreign women raped and subjugated
Earlier this year, a blogger and literature buff named Yehudah Bello, who writes in various venues about history and the theory of evolution, wrote a blog post with the striking title: “The Female Leftist Activists  are Raped Day after Day, Night after Night.” Bello is no ultra-nationalist, and he supports the creation of a PA state – a fact which makes his claims all the more believable.

Most female leftist European activists, writes Bello, are brainwashed in their youth into hating Israel, and then sent directly into Judea and  Samaria, without spending a single night in Tel Aviv, lest they see civilian Israeli society for themselves and find that they like it. They  are whisked off to Shechem, Jenin and other PA towns and housed in Arab  educational or cultural facilities, or private homes. Local Arab girls are sent to befriend them and they have no choice but to trust them.

It is is easy, explains Bello, “to carry out a sexual crime against a foreign girl, in her first days away from her family, in a place where no police have ever visited. And this is what happens, and has happened.”

"I was told of such rape cases by women who are not Jewish: a female European leftist activist, a female Red Cross volunteer and a young Arab  woman from Yafo,” he says. He says that he met these women when he carried out IDF reserve duty, and met them afterward as well. “They told  me what goes on there, in the Palestinian villages, far from any prying  eye.”

"These are not just cases of rape carried out to satisfy lust,” he writes. “Usually, they are carried out systematically in order to make the girl pregnant and then take her as a wife – after she converts to Islam, of course. We know about this system from the stories of women who underwent a similar process within Israel and escaped to Europe. But  it is hard to escape from the Palestinian territories. Sometimes these women – some of whom are no longer young – are never allowed to leave their homes unaccompanied, in order to forestall their escape.”

If someone were to compare the list of foreign female activists who enter Judea and Samaria to the list of those who leave, Bello claims, the magnitude of the phenomenon would be proven. “Everyone knows about it, but no one dares talk about it. The Palestinians have been turned into martyrs. In the Middle Eastern television channels, IDF soldiers are represented as the brutal rapists, who rape Palestinian women.”

New Israel Fund involvement
The reports by Aloni-Sedovnik and Bello are of particular interest because feminist groups have been spearheading leftist activism in Israel for many years. According to Gila Svirsky <http://www.gilasvirsky.com/wib4.html> ,  the former director of the New Israel Fund in Israel and founder of NIF-sponsored Women's Coalition for Peace, “women’s peace organizations,  known collectively as the Israeli women’s peace movement, became the most vibrant and persistent part of the peace camp in Israel.” These groups espouse an ideology which equates militarism (by Israelis) with male domination of women. Far from being a fringe element, leftist-feminists of this ilk are a dominant force in the Israeli academic world, the press, the Knesset and the judicial system.