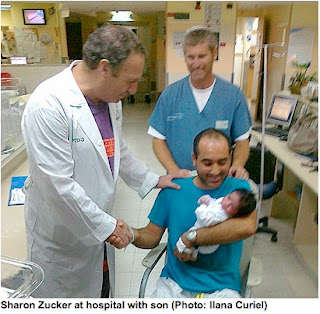 B"H
The sickest part of this story is that terrorist groups would actually want to take credit for this barbarous act!  According to Arutz7, The Al-Aqsa Martyrs Brigade, the military wing of Fatah, and the Al-Quds Squads of the Islamic Jihad have claimed joint responsibility.
I want Israel to react in such a way that no terrorist group would want to take credit for an attack.  I want Israel to come down on those two groups so hard and so fast that they all DENY any connection with any attack ever.  This is the only way attacks will stop.


This is the second pregnant woman to be attacked in Israel during this month, and, Thank G-d, this woman was able to get away, give birth, and be treated successfully for her injuries.  According to the lastest update, she underwent Orthopedic surgery and was considered in good condition.  Her baby, who came into this world by a miracle, is healthy and in his father's arms (B"H  May he grow in Torah and Mitzvoth from Brit to Bar Mitzvah to Chuppah!).
Now I will ask the obvious:  are these blood stained pigs of Satan (a.k.a. Islamic terrorists) targeting pregnant women?  It seems so.
Please, my dear Israel, don't just arrest, deter!
M
-----

An Israeli in her ninth month of pregnancy sustained moderate injuries Sunday night when Palestinian terrorists opened fire at the vehicle she was traveling in near the West Bank community of Teneh Omarim.

Another vehicle was damaged in the incident, but its passengers were unharmed.

In a statement issued, the groups said, "The attack was carried out to mark the 15th anniversary of the killing of the Islamic Jihad's founder Fathi Shaqaqi." However, in a conversation with Ynet, members of both organizations denied having any knowledge of the statement.

The incident, during which the woman's husband was lightly injured, occurred just a few hours before the settlement construction moratorium was due to expire
Posted by Unknown at 12:42 AM