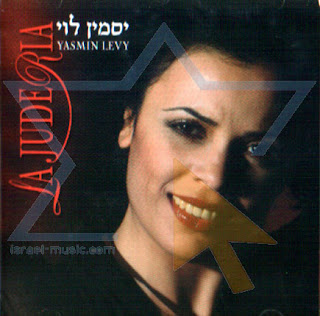 WARNING TO MY RELIGIOUS READERS: The song links in this post lead to Youtube videos of Yasmin Levy singing. They are not necessarily tzniut. Please exercise caution.

Interview: Yasmin Levy
Yasmin Levy is selling out venues in Europe and in demand in the States. Not bad considering the Israeli singer specialises in religious songs in a near-dead language
http://www.thejc.com/arts/arts-interviews/27014/interview-yasmin-levy
By Nicola Christie

‘I’m not mainstream,” says Yasmin Levy, sitting down with a coffee in a West Hampstead café, her local hang-out when staying in London. She is about to go on the road for a UK tour that takes in a different city every night — with a day of rest for Shabbat. Levy is in demand — a 700-seat venue in Paris recently sold out within days; US promoters are clamouring for her.

At the age of 34, and with a new — her fourth — album called Sentir under her belt, Levy has hit the big time. Not only are her audiences up, her music is getting ecstatic reviews from the critics.

It is not bad for an artist who was once told that her music, “a Jewish thing that nobody will get”, would receive an audience of, at most, 127. “I replied to my manager that I would find 128!” she laughs.

What she says: In combining the Ladino songs of Sephardi Jews with Spanish flamenco she believes she is attempting “musical reconciliation of history”
-----

Levy’s debut album, Romance & Yasmin, earned her a BBC World Music Award nomination in 2005; it was followed with La Juderia and Mano Suave. All three releases were sung in Ladino — the name given to the now-almost extinct group of languages spoken by Sephardi Jews who were expelled from Spain in 1492 and dispersed around the Mediterranean.

With fashionable Spanish producer Javier Limón on board for Sentir, Levy has now exceeded even her own expectations of how far her music could go. “You have to remember these songs were never meant for the stage,” she explains, “they were for the synagogue, and definitely not for a female singer!”

Limón does for Levy what Mark Ronson did for Amy Winehouse. “I had dreamed with working with him for eight years,” says Levy. “Finally it happened and I moved to Madrid for two months to make the album with him. I sat down and said I want to lose the ‘oriental’ sound with this one and do flamenco. He said: ‘Stop. Let’s keep you the way you are.’” The result is a sound that is fresh and light, particularly considering the loaded history the songs carry with them; the music of a people trapped in ghettos and exile. “I wanted to get away from the heavy, reverential sound,” says Levy. “I know these songs are old and sad — all of my songs would be sad if I could get away with it! — but to find an audience for them today, I need to make them live again.”

Levy had never planned to be a Ladino singer. “I was asked by the Ladino authority, in Israel, whether I would consider making a Ladino album and I thought, why not?” she recalls.

Her father was the renowned musicologist Yitzhak Levy, famous for his painstaking collection of Ladino songs. He visited elderly people all over Israel, whose roots were Ladino, to record their voices and their songs, and sing them himself. He was also appointed head of the Ladino department of Israel’s national radio station. Yitzhak died when his daughter Yasmin, the youngest of five, was just one year old. She has now made it her mission to keep his work alive.

“Since that first album I have not been able to leave the Ladino songbook. And I don’t think I ever will,” she says. “The Sephardi songs are much bigger than me. Because it is an endangered language, the only live and kicking thing that will remain will be those songs. It has become a mission for me. I have tried singing in other languages — Hebrew, for instance — but it’s not the same. I mean, I go and buy milk in Hebrew.”

It is an irony that had her father lived, Levy may not have become the singer she is today. “I am sure I would not be. It was never encouraged, as a profession, in our house,” she says. “You know how it is, the Jewish state of mind — Jewish children are to be lawyers, engineers, professionals. Also, I was so in awe of my parents’ voices — my mother’s is like an angel — I would not dare join them.”

Now her father metaphorically joins her on stage every night. “These songs are a way to be with my father. I don’t remember him but I sing with him, every single night. I live his life.” Through the miracles of modern technology, she even recorded a duet with him on Sentir — a song called Una Pastora. “I never thought I would be able to do that. It is very scary,” she says.

Astonishingly, it was only at the age of 17 that Levy discovered her voice. “It was because of a friend of my mother’s. I was visiting her in Spain, before I went to do my Israeli army service, and she asked me to record a Sephardic song for an album she was doing. And that was the start.”

It is not strange to hear that her home of Jerusalem, where her mother, brothers and sisters still live, provides her with huge inspiration. The fact that she hails from the Golden City is the first thing she tells her audience when she gets on stage.

“Jerusalem is my being,” she says. “My mum says we are Jerusalem stone. Jerusalem is my dreams, my hopes, my music, my life — a stranger could never understand. I sing about longing for Jerusalem and I really do, whenever I am away from it.”

It is also a city that has taught her to watch her back, be expectant of attack, though she can cite only one instance where she has felt threatened at an international performance — when the word “Yahud”, Jew in Arabic, was shouted out from the crowd.

She talks about the music scene in Israel — one that is flourishing, Levy says — though she is not in touch with it herself, preferring the songs of chazans or the music of old stars like the flamenco singer Antonio Molina, Edith Piaf, Billie Holiday to the funk and pop of young Israeli musicians. She is not the only one to dip into the cantorial songbook. “All of Israel is starting to look for its roots now. People have a hunger for these songs. A lot of famous Israeli singers are recording them now.”

At the end of every one of her albums, Levy closes with a song of prayer; in Sentir, it is Yigdal. In it, she thanks God for her voice and her music. But does she feel that what she does is so powerful, something that can help to ease the conflict in her country?

“No, I am not so innocent to think that a musician can bring about peace in a country with such deep divides. Although there was the time when an Iranian man, in his twenties, sent an email to his mum after he had been to my concert, saying his life would never be the same because he had seen an Israeli woman sharing love and he had only seen Israelis through hate. I do think that music brings about harmony, a way to meet and to see a person differently,”

For Levy herself, it offers the one place that she is truly free. “On the stage, making music, I am protected, by my voice. I am in another world, I can go crazy, I can truly be myself.”