Wow. Evidentally, Even Before Islam Existed, They Built A Mosque Called "Rachel's Tomb" And Another In The Tomb Of The Patriarchs 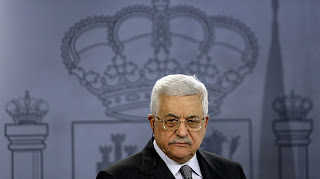 Just before Purim, and the foolish arabs led by their king-of-fools, Abbas, are trying to turn the world upside down. Rachel’s Tomb and the Tomb of the Patriarchs are clearly Jewish sites, have always been Jewish sites, and will remain Jewish sites forever.

They are following typical behavior for arabs—if you want to destroy someone, destroy their religion first.

The Temple Mount is Jewish, it is our Holy Temple. They put a mosque on top of it, and pray with their backsides to the Holy of Holies.

They took over whole sections of the Tomb of the Patriarchs, which they should never have been allowed to do, and they won’t let us visit our own ancestors because, they claim, it is a “mosque.”

They attempted, time after time after time, to destroy Joseph’s Tomb, to make the access impossible, and to kill those who would visit—but it is still our Holy site, and we still visit. Next, don’t be surprised to see that they have built a “mosque” over the tomb site and proclaimed it a “moslem site.”

They are like bratty children who want their way and their way only, and when they don’t get it they stamp their feet, scream, and have a tantrum in the form of terrorist attacks.

We should begin calling their uprising the “Infantada” rather than the “intefada.”

Poor Abbas. He doesn’t want Jews to have their land or their holy sites—why? Because. That’s why.

“Their mine!” he screams as he has a tantrum in the street like a two-year-old would scream, claiming his older brother’s toys, toys purchased before he was even a gleam in his mother’s eye, are his.

Does he never tire of saying completely ridiculous things?

A lie is still a lie, Mr. Abbas. You are living a lie claiming you are part of a made-up people called the “Palestinians.” Now, your made up people are going to steal the things that you need to give yourself legitimacy?

I guess you can go ahead and try—but lying is lying and stealing is stealing.


(IsraelNN.com) Palestinian Authority Chairman Mahmoud Abbas warns of a “holy war” over Rachel’s Tomb in Bethlehem. Muslims claim it is a 1,000-year-old mosque, although Islam - only 1,300 years old itself - began publicly claiming the site only 44 years ago. Prime Minister Binyamin Netanyahu accused Abbas of “hypocrisy.”

The Prime Minister announced earlier this week that the ancient tomb, located immediately south of Jerusalem, and the Patriarchs’ Cave (Me'arat HaMachpelah) in Hevron, are Jewish heritage sites that will be refurbished. Genesis Chapter 23 describes the purchase of the Patriarch's Cave by Abraham in order to bury his wife Sarah, and Genesis 35, 19 describes that Rachel "died and was buried on the road to Efrata which is Bethlehem...the sign of her grave stands until today."

The entire Muslim world has protested Israel’s initiative, and the United Nations has expressed “concerns.” Hizbullah, Iran, Egypt, Syria and Jordan warned that the move is a provocation, and Hamas outrightly called for violence. Abbas, visiting in Brussels, told the Belgian parliament in Brussels that the move is a “serious provocation which may lead to a religious war.”

The Second Intifada, also known as the Oslo War, broke out in 2000 after then-Prime Minister Ariel Sharon visited the Temple Mount in Jerusalem. Leftist and Arab protestors have rioted the past two days in Hevron, where the Patriarch’s Cave is located, throwing rocks at soldiers, one of whom was lightly wounded.

Abbas turned to the European Union, which heavily finances the PA, and said that the EU "understands the real nature of this Israeli provocation."

The Iranian Foreign Ministry accused Israel on Tuesday of “annexing two religious sites of the Palestinians, the Sanctuary of Abraham (Al-Haram Al-Ibrahimi, referring to the Machpelah Cave) and Bilal Ibn Ribah mosque [Rachel's Tomb] in Bethlehem." Iranian Foreign Ministry Spokesman Ramin Mehman-Parast said, "Unfortunately, [the] Zionists' decision rises from the regime's strategy for cleaning all the sanctities of the Muslims and Christians in the occupied Palestine to give them a Zionist identity."

Prime Minister Netanyahu’s office charged Abbas with conducting a “deceitful campaign of lies and hypocrisy" by referring to Jewish sites as Moslem mosques. The Arab world’s claims follow a campaign the past several years to deny the existence of any Jewish history at the Temple Mount site, including the Western Wall (Kotel) in the Old City of Jerusalem.

"The State of Israel is committed to freedom of religion for worshippers of all faiths at the holy places and thus it acts in practice,” said the office of the Prime Minister. “Rachel's Tomb and the Tomb of the Patriarchs, the over 3,500-year old resting places of the Patriarchs and Matriarchs of the Jewish People - Abraham, Isaac, Jacob, Sarah, Rebecca, Leah and Rachel - certainly deserve preservation and rehabilitation.”

Hevron community spokesman Noam Arnon noted that the Patriarchs' Cave “was a Jewish site thousands of years before Islam ever existed.”

Hizbullah said that Israel’s declaration that the tombs are Jewish heritage sites represents "arrogance” and “is yet another example of aggression against Muslim holy sites and an attack on the dignity of 1.5 billion Muslims around the world.”

Egyptian foreign ministry spokesman Hossam Zaki said in a statement: "This new Israeli position will only feed extremism, confrontations and violence, and it does not serve US efforts to revive peace.” Jordanian Minister of State for Media and Information Nabil Sharif said, “The Israeli policies that also seek to alter the historical and religious features on the ground in the occupied territories are rejected and are against international legitimacy principles.”

Jews had free access to Rachel's Tomb under the rule of the Ottoman Empire since the 19th century, and Muslim references to a mosque at the site began to appear publicly only in 1966. Muslim history refers to Rachel's as far back as the Quran, which recounts Rachel’s death and burial, as stated in the Bible.

The Oslo Accords interim agreement in 1995 states that security arrangements must “ensure free, unimpeded and secure access to the relevant Jewish holy sites.” The agreement also defined Joseph’s Tomb in Shechem and the Shalom Al Israel synagogue in Jericho as “Jewish holy sites.

The Sharon government surrendered daily access to Joseph’s Tomb (pictured) following Arab terrorist attacks, and Jews have been barred from the Jericho synagogue since the PA took over full control of Jericho. Knesset Member Dr. Michael Ben-Ari (National Union) this week led a group of Jews past blockades and visited the synagogue, until the IDF removed them.

The Oslo Agreement also states, “The Palestinian side shall respect academic freedom and rights… [and] shall ensure free access to archaeological sites, open to the public without discrimination."

Among the sites are synagogues in Samoa and Yatta, south of Hevron, which have been closed to Jewish visitors, with the exception of rare visits under heavy IDF guard. Also listed is the synagogue in Gaza City, where Jews are not allowed. The Sharon government expelled more than 9,000 Jews from the area in 2005, destroyed all Jewish communities there and turned the area over to the PA, now controlled by Hamas in Gaza.
Posted by Unknown at 3:45 AM