A New Hearing for Kol Ishah 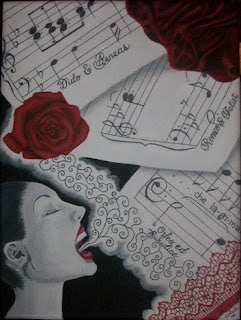 http://www.jewishideas.org/articles/new-hearing-kol-ishah
By Michael Makovi
Michael Makovi is a member of the University Network of the Institute for Jewish Ideas and Ideals. He studied at Machon Meir in Jerusalem for three years and in Yeshivat Hesder Petah Tikva during this academic year. He will be attending Bar-Ilan University this coming school year.

The topic of kol ishah, the halakhic prohibition on men from listening to a woman's singing voice, is obviously a matter of concern for religiously observant Jews. Yet, there are various interpretations as to what exactly constitutes the prohibition. The present essay aims to clarify the prohibition, demonstrating that it is far less restrictive than is commonly believed.

Rabbi Eliezer Waldenberg ruled that it is permissible for a man to hear a recording of a female singer when the singer is not visible to the listener. Rabbi Yosef Eliyahu Henkin held similarly. Rabbis J. David Bleich and Haim David Halevi indicated that the use of electronics for the audio alone does not mitigate the prohibition; the listener must not be able to see the singer at all. Rabbi Ovadia Yosef and Rabbi Haim David Halevi both ruled that electronic recordings mitigate the prohibition only if the listener has never once glimpsed the woman singer, and Rabbi Yosef applied this even after the woman singer is deceased. Going still further, Rabbi Yaakov Breish, Rabbi Shmuel Wosner, and Rabbi Binyamin Silber all ruled that even audio-only electronic recordings of women may not be listened to, with no mitigations or leniencies whatsoever. According to them, listening to a woman sing is simply prohibited. Rabbi Menashe Klein disagreed with Rabbis Breish, Wosner, and Silber, and argued that electronic records are not the woman's "real" voice, and that listening to recordings ought to be permitted. Even he, however, stated that it is "distasteful" to rely in practice on the leniency."[1]

All these recent authorities took it for granted that listening to women sing is categorically forbidden for men, and that only select and specific factors may mitigate this otherwise absolute prohibition. It is understandable, then, that so many Orthodox laymen assume that men listening to women sing is categorically forbidden. It is taken as almost axiomatic that kol ishah is strictly and absolutely forbidden; few if any compromises are brooked, and leniencies are offered reluctantly if at all.

However, the preceding understanding is in need of careful anaylsis. On three separate occasions in the Talmud (Berakhot 24a, Kidushin 70a, and Sota 48a), statements are made about the sexual (`erva -or peritzuta) nature of a woman's voice. The one which will concern us is the primary one, in Berakhot 24a, where we read,

"Shemuel said: The voice of a woman is nakedness ( kol b'isha `erva) as it says (Song of Songs 2:14) 'for your voice is sweet and your countenance comely.'"

This passage occurs during a discussion of reciting Shema in the presence of `erva. One might interpret Shemuel as continuing that discussion, or as beginning a new one about just what is `erva irrespective of Shema. As is apparent from the discussion, a woman's exposed handbreadth (tefah) is forbidden to be seen during Shema, while her little finger (etzba ketana) is forbidden to be gazed upon with sexual intent at all times. Thus, kol ishah must be like either of these two paradigms. There is a range of authorities on either side of this dispute, but the Rambam and Tur-Shulhan Arukh rule that kol ishah is a general prohibition, not linked to Shema. This is thus the practical halakha to be taken for granted in this essay. It is an undeniably clear principle that gazing upon a woman's little finger is prohibited only where there is sexual pleasure, as is shown in Avodah Zara 20a-b. If kol ishah is like a little finger, then the implications are obvious. (Also note that Shemuel says only kol, "voice", with no mention of singing per se.)

It was my friend Dowid Mosha who first pointed out to me that kol ishah's being a general prohibition is actually potentially a leniency, not a stricture. He quoted the Rambam, Hilkhot Issurei Biah 21:2, which says [2], "And he who looks at even the little finger of a woman to take pleasure in it is like one who looks at her private parts, and even to hear a voice of an erva or to see her hair is forbidden."

As Dowid then explained, "it is apparent that the focus is on the intent and the result. If an individual wishes to be aroused, is likely to be aroused, or is aroused inadvertently, then he or she must take the necessary measures to protect themselves." Rambam equates looking at a woman's etzba ketana, her little finger, with hearing the voice of a woman. And there is no prohibition of gazing at a woman's finger per se; the prohibition is only when one so gazes specifically for the sake of sexual pleasure.

Furthermore, Rambam speaks of scrutinizing (mistakel) her little finger (etzba ketana) with intent to take pleasure in it (v'nitkaven leihanot). He uses the word mistakel, which carries the implication of intense scrutiny, as opposed to the word ro'eh, which would imply simple ordinary sight. According to Rambam, the prohibition surrounding etzba ketana is that a man is forbidden to intensely scrutinize (mistakel) a woman's little finger with the express intention of deriving sexual pleasure thereby (v'nitkaven leihanot). Since Rambam links this discussion of etzba ketana with kol ishah, it seems apparent, as Dowid expressed, that kol ishah is likewise prohibited only when [MORE]
Posted by Unknown at 1:50 AM