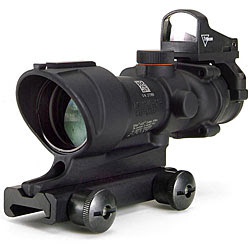 More Photos
An ABC News report earlier this week revealed that the Michigan-based company, which has a contract to provide up to 800,000 scopes to the U.S. military, prints references to New Testament chapters and verses in code next to the model numbers of its scopes. The scopes are used by the U.S. Marine Corps and Army in Iraq and Afghanistan, and by U.S. allies in those countries, and for the training of Afghan and Iraqi troops.

"Trijicon has proudly served the U.S. military for more than two decades, and our decision to offer to voluntarily remove these references is both prudent and appropriate," said Stephen Bindon, Trijicon president and CEO in a statement. "We want to thank the Department of Defense for the opportunity to work with them and will move as quickly as possible to provide the modification kits for deployment overseas."

This is a really interesting case. On one hand, it is a private company, and they can do what they want with their products. I can see how the company feels—they are expressing their right to religious expression—and the inscriptions are small and subtle. I also understand that the company wishes to aid the American soldiers, who are largely xtian, and feels they are doing something positive in that regard (i.e. they have good intentions).

On the other hand, the US military has been allowing (and continues to allow) overt xtian proselytizing, and this is just one more example of their willingness to look the other way when it happens. The inscriptions are small, yes; but it is also one more thing that can make those of other faiths feel less welcomed and less “American” than soldiers who are xtian. This can be bad for moral and bad for troop unity.

I am not sure of the halachic implications of using these sites—they obviously don’t render the gun an idol, but they do invoke the blessings of a foreign god . . . So, are they assur?

Too bad we have to ask this question.

Military officials said the citations don't violate the ban and they won't stop using the telescoping sights, which allow troops to pinpoint the enemy day or night.

The contractor that makes the equipment, Trijicon, said the U.S. military has been a customer since 1995 and the company has never received any complaints about the Scripture citations.

"We don't publicize this," Tom Munson, Trijicon's director of sales and marketing, said in an interview. "It's not something we make a big deal out of. But when asked, we say, 'Yes, it's there."'

The inscriptions are subtle and appear in raised lettering at the end of the stock number. Trijicon's rifle sights use tritium, a radioactive form of hydrogen, to create light and help shooters hit what they're aiming for.

Markings on the Advanced Combat Optical Gunsight, which is standard issue to U.S. special operations forces, include "JN8:12," a reference to John 8:12: "Then spake Jesus again unto them, saying, 'I am the light of the world: he that followeth me shall not walk in darkness, but shall have the light of life,"' according to the King James version of the Bible.

The Trijicon Reflex sight is stamped with 2COR4:6, a reference to part of the second letter of Paul to the Corinthians: "For God, who commanded the light to shine out of darkness, hath shined in our hearts, to give the light of the knowledge of the glory of God in the face of Jesus Christ," the King James version reads.

The Defense Department is a major customer of Trijicon's. In 2009 alone, the Marine Corps signed deals worth $66 million for the company's products. Trijicon's scopes and optical devices for guns range in cost from a few hundred dollars to $13,000, according to the company's website.

Mikey Weinstein, president of the Military Religious Freedom Foundation, says the biblically inscribed sights could give the Taliban and other enemy forces a propaganda tool: that American troops are Christian crusaders invading Muslim countries.

"I don't have to wonder for a nanosecond how the American public would react if citations from the Koran were being inscribed onto these U.S. armed forces gun sights instead of New Testament citations," Weinstein said. The foundation is a nonprofit watchdog group opposed to religious favoritism within the military.

Weinstein said he has received complaints about the Scripture citations from active-duty and retired members of the military. He said he couldn't identify them because they fear retaliation.

A spokesman for U.S. Central Command, which manages military operations in Iraq and Afghanistan, said the inscribed sights do not violate the ban on proselytizing because there is no effort to distribute the equipment beyond the U.S. troops who use them.

"This situation is not unlike the situation with U.S. currency," said the spokesman, Air Force Maj. John Redfield. "Are we going to stop using money because the bills have 'In God We Trust' on them? As long as the sights meet the combat needs of troops, they'll continue to be used."

Capt. Geraldine Carey, a Marine Corps spokeswoman, said Tuesday in an e-mailed statement that "we are aware of the issue and are concerned with how this may be perceived." Carey said Marine Corps acquisition officials plan to meet with Trijicon to discuss future purchases of the company's sights. The statement did not say what the nature of those discussions would be.

Gary Tallman, an Army spokesman, said the service was not aware of the nature of these markings and its acquisition experts are investigating to determine if Trijicon violated any procurement rules.

Munson, Trijicon's sales director, said the practice of putting Bible references on the sites began nearly 30 years ago by Trijicon's founder, Glyn Bindon, who was killed in a plane crash in 2003. His son Stephen, Trijicon's president, has continued the practice.
Posted by Unknown at 4:27 PM