No. Tu B'Shevat is not "Jewish Arbor Day." Sigh 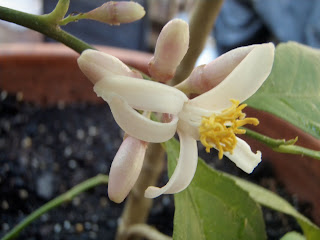 I was going through web pages today trying to find something about Tu B'Shevat for today, and I was shocked at what I saw! For example, some websites likened Tu B'Shevat to "Arbor Day" in the US.

Arbor Day is nice, but it isn't a religious holiday, and it isn't a New Year for trees (i.e. a day from which we can count the age of a tree for religious purposes.)

It also isn't a day of "ecology" where we "come to know mother earth!" You can ascribe ecological benefits to Tu B'Shevat, but that is not its purpose. And that whole "mother earth" thing is just WAY too pagan for me.

Tu B'Shevat, as explained below, is the "fiscal year" for trees regarding Jewish law.

For example, I planted an etrog tree on erev Tu B'Shevat. That was four years ago. I know I am permitted to eat the fruit of that tree because it is more than three years old (if I could ever get the darn thing to set fruit!).

There are two things people do on this day: plant a tree and have a Tu B'Shevat Seder.

Planting a tree is probably impossible for most of us because we can't dig through the ice, but you can PURCHASE A TREE TO PLANT IN ISRAEL.

Tu B'shevat?
by Eric Simon
(based on a conversation with Rabbi Dov Lipman)
http://www.torah.org/learning/yomtov/tubshvat/tubshvat.html

What is Tu B'Shevat?

Any answer ought to start from the same place that all of our Jewish tradition flows from: Torah and Talmud.

The Torah doesn't mention the date, but it is a subject in Tractate Rosh HaShana. In fact, the tractate opens up with the following words:

O.K. So it's a new year for trees. What does that tell us?

Well, tithing is a pretty important concept regarding produce in Israel. Without getting into all the complications of it, suffice it to say that tithing is on a seven-year cycle (the seventh year is the "shmitta" year, where we are not allowed to grow anything in the land of Israel -- btw, this year is a shmitta year), and different years require different tithes, and you are not allowed to pay the tithe of one year with produce from a different year.

So, the 15th of Shevat marks the end and the beginning of the "fiscal year" for trees.

By the 11th century, we can read from the writings of Rebbenu Gershom (he is probably most well known as the one who issued the decree that a Jew may not marry two wives) that one may not fast on that day, just as we may not fast on Rosh HaShana.

By the 18th century we read in "Kaf HaChayim" that erev Tu B'Shevat there is a custom for special learning, for learning Mishna, Zohar, and to make blessings on fruits and eating it.

So, clearly, there is some religious significance to the day. But what is it?

Before we look into that question, we must digress and talk about Jewish holidays in general. Jewish tradition posits that time is both linear (we are progressing) and circular (that each time of the year has a spiritual similarity to the same point in the other years). And so, just like a place can be holy, a particular time, being simply another dimension, can be holy. Just like a place can have a certain attribute, a particular time can have a certain attribute.

To put it in larger terms, Jewish holidays are _not_ a re-enactment of an event, or simly a memorial or remembrance of an event, but rather it celebrates an appropriate time for a particular aspect of human growth.

Let me give an example: The 10th of Tishrei (Yom Kippur), according to Jewish tradition, is a propitious time for atonement. In fact, that day is so spiritually full of atonement, that a Jew atones for his sins during the year simply by living through that day. (That doesn't mean to blow off Yom Kippur, however -- for Yom Kippur alone does not atone for sins committed _on_ Yom Kippur!) Thus, it is no coincidence that G-d forgave the Jewish people for the sin of the golden calf on the 10th of Tishrei.

So now the question becomes: what is it about the 15th of Shevat and Trees that should relate to us?

Trees are often a metaphor for humans. Many of us have heard the injunction that during war one may lay siege to a town, but one may not cut down the trees. The entire verse, Deut. 20:19, reads: "When you lay siege to a city for many days to capture it by making war against it, you shall not destroy its tree, wielding an axe against it; for you shall eat of it but not cut it down; for man is a tree of the field..."

Man is a tree?

(I should hasten to point out that halachically speaking, and you can see in this verse where it comes from, that one is only prohibited from cutting down trees that bear fruit!)

In Tractate Ta'anit (7a) we read: Rabbi Zeira explained the strange verse "Ki ha'Adam Eitz ha'Sadeh" (for a man is a tree in the field) with the seemingly contradictory verse there "Ki Mimenu Sochel, ve'Oso Lo Sichros" (for you shall eat of it and not cut it down) -- that if he is a worthy teacher, then eat from him (learn from him). Otherwise, destroy him and cut him down.

Others consider the fruit of one's "tree" as the mitzvos that we do.

And, indeed, trees are often a metaphor for Torah. The most famous expression of this is in Proverbs (3:18): "It is a tree of life for those who hold fast to it."
I'd like to bring in one other tradition about Shevat:

In Jewish tradition, the entire book of Deuteronomy was Moshe's last speech, and he gave it over the last 5 weeks of his life. Tradition posits that he started on the 1st of Shevat. It is said that the average person who was there and listening to it began to feel spiritual growth on the 15th of Shevat -- Tu B'Shevat. (It occurs to me, I wonder if the dispute about the "new year for trees" between Beis Shammai (who asserted it was on the 1st) and Beis Hillel (who asserted it was on the 15th is related to this ... ?).
So, tying it all together:

So, Tu B'Shevat is a time for Jews to focus on "the Tree" -- the Tree of Torah and the Tree of our own spiritual growth, and our potential for growth.

And so, just as we enjoy the fruits of the trees and wish for a good year for trees, I wish you all a good year for growth in Torah (keep on studying!), and for your own spiritual growth.
Posted by Unknown at 4:51 AM