Man Orphaned by Murder of Father, Sister, Uncle and Grandfather in 1929 Hevron Riots, Passes Away in Israel 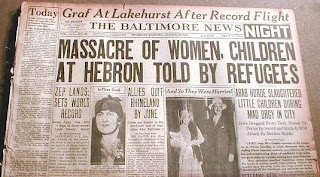 My fear is that people will forget the horrors of the Hebron Riots, when a violent mob of arabs went on a rampage through the ancient Jewish town of Hebron, killing everyone they found.

Unfortunately, the stupidity of the British at that time was similar to the stupidity of the Israeli government under Olmert which Bibi allows to continue today. The British "trained" the arabs to serve as police in Hebron, just as the Israeli government has "trained" the PA police to serve as police in Hebron today. When you read the accounts of the massacre, you can't help but see the clear parallels. Why are we so stupid as to repeat history over and over and over again???

Anyone who thinks that arabs have a right to even a inch of Hebron is not only pathologically ignorant of history, but stupid as well.

Anyone who thinks that arabs started killing Jews when Jews "occupied" "palestinian" land are not only stupid, they are liars of the most hideous type.

"On hearing screams in a room I went up a sort of tunnel passage and saw an Arab in the act of cutting off a child's head with a sword. He had already hit him and was having another cut, but on seeing me he tried to aim the stroke at me, but missed; he was practically on the muzzle of my rifle. I shot him low in the groin. Behind him was a Jewish woman smothered in blood with a man I recognized as a[n Arab] police constable named Issa Sherif from Jaffa in mufti. He was standing over the woman with a dagger in his hand. He saw me and bolted into a room close by and tried to shut me out-shouting in Arabic, "Your Honor, I am a policeman." ... I got into the room and shot him."
(Bernard Wasserstein, The British in Palestine: The Mandatory Government and the Arab-Jewish Conflict 1917-1929, Oxford England, Basil Blackwell, 1991)

Here are some pictures, just in case you think the account is overstating the case: 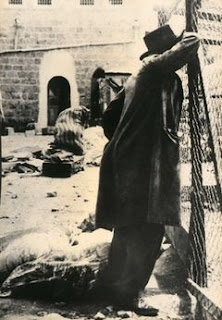 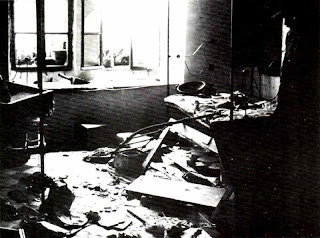 Hebron is an ancient Jewish town. All of the areas around Hebron are areas we have lived on and inhabited for thousands of years. It is the second most Holy city in Israel.

May Hashm's justice rain down on anyone who would even SUGGEST we give one inch of Hebron or one inch of Jerusalem (or one inch of Israel, for that matter) to our enemies!

This man's death is a sign that the rest of us need to take up the burden to NEVER FORGET THE HEBRON RIOTS and NEVER LET THE ARABS PROFIT FROM THESE DEATHS.

May the Peace House and the rest of Hebron be liberated by the courts to again prosper as Jewish homes in a Jewish town where our Jewish ancestors are buried.

(IsraelNN.com) Yosef Lazarovski, who survived Arab rioting in Hevron in
1929, passed away Thursday. Lazarovski was between five and six years old
when he saw his father, sister and uncle killed in Slonim House, where they
tried to hide from the rioters.

Also killed was his maternal grandfather, who had come to Hevron from
Herzliya for a visit. The body of a yeshiva student who was killed fell and
covered him, and Lazarovski's life was saved because the rioters thought he
was dead. Another sister saved his mother, who was also thought to have died
in the rioting.

He served in the naval wing of the Palmach militia, and when the modern
Jewish state was born, he spent many years in its security services. In his
later years, he campaigned, without response, to be officially declared an
orphan of terrorist activity.
Posted by Unknown at 9:13 AM