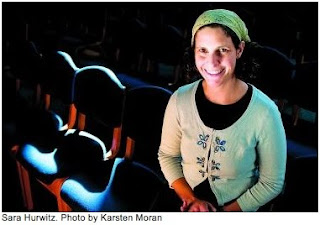 I like the title "Maharat," because it is signifies that she is a woman, and I think that makes a big difference to me.

The truth is, women know women and we have always needed someone wise to answer those questions--someone learned, someone approachable.

Those who might think what she is doing is a break from Jewish Tradition should be reminded that Devora was a Dyan. How would Devorah qualify to be a Dyan if she were not qualified to become a leader, a Maharat?

The role of Maharat is a completely halachic position. She is not making a minyan, she is not doing any job she cannot perform under halacha. She is simply providing knowledge, support, and leadership.

Just as men can do some things she can't, she can do a lot of things that the men can't--primarily, be there at a childbirth, provide answers to women's questions (in a much more modest way), and share a hug, hold a hand, or simply provide a strong support for the women of the community.

We need women leaders, religious women leaders who are formally trained in the laws of family purity, Kashrut, and everything in between.

Thank you, Sara Hurwitz, for helping to rebuild this profession, for leading the Jewish nation back to our roots and making us see that religious expression, education, and leadership of women can be done properly.

For a woman who has spent years studying the holiest of Jewish texts, Sara Hurwitz, 32, spends a lot of time fielding inquiries into semantics over her own title. Just by leading services at Hebrew Institute of Riverdale, she answers them with another.

“The question really is: is it a means to an end or is it a final title?” said Maharat Hurwitz.

Maharat means leader in Jewish religious law, spiritual matters and Torah. The title was given to her in a conferral ceremony by HIR’s Rabbi Avi Weiss in March; Orthodox tradition says she cannot be called a rabbi because she is a woman.

Some ask why, if Maharat means she performs duties of a rabbi, she isn’t called one. Others question her officiating at all.

There are a handful of Orthodox female leaders in this country, so by doing what comes naturally to her, Maharat Hurwitz has stepped into the center of a political debate over women’s growing roles in Orthodox synagogues.

To some she has become a walking symbol of women’s progress, especially since this fall when she founded the first Orthodox institution in the country to train women to function as spiritual leaders.

To others she represents an unholy push toward modernity (she once saw a man turn his back and walk out when he saw her leading prayer). At HIR, she says, people have begun to see her quite simply as the religious leader they call when a loved one dies or a baby is born — as a rabbi.

Certainly the image people have in their minds when they think of a rabbi, she said, doesn’t always match up with her appearance. But that is starting the change, she said.

But ask her another seemingly simple question and the issue arises again: was she ordained?

The way she tells it, her work under Rabbi Weiss led to him naming her Madricha Ruchanit, or religious mentor, in 2006 and she continued to study under his auspices.

“And that’s what led to a conferral ceremony, which is really a code word for ‘smichah’ or ordination,” she said.

“But we had to stay away from certain language like ‘smichah,’ ordination. [They] are words associated with men becoming ordained, at least within the Orthodox community. And rabbi, which is controversial.”

Maharat Hurwitz says the clergy chose her and she is more concerned with being able to function as a rabbi than with titles. She cannot act as a witness, lead all parts of services in mixed settings or be counted in the formation of a “minyan,” or Jewish quorum. But she can tend to the sick, comfort the grieving and act as a spiritual guide.

However she feels about her ill-defined role, she is a woman used to standing apart.

Maharat Hurwitz grew up in South Africa in a non-observant Jewish family. At age 12, after being introduced to religion by an aunt, she knew she wanted to lead a pious life as an Orthodox Jew. And she knew little of any kind of restrictions based on gender.

“I think that’s probably what helped me get to where I am, because it never occurred to me that I wouldn’t get to do everything that I dreamed of,” said Maharat Hurwitz.

Shortly after her bat mitzvah, in 1989, her family immigrated to Florida, partly because of their discomfort with apartheid.

She had studied at a Jewish day school and attended an Orthodox synagogue — the only kind to be found in Johannesburg. Her family moved near an Orthodox shul for her benefit when they relocated to Boca, but sent her to public high school.

She pursued religion on her own. Between Boca Raton and Barnard, Columbia University, she studied at a yeshiva in Israel. She had feet in two worlds.

“I was always an outsider,” she said.

“When I was trying to get into the Orthodox community, I was still always a little bit of an outsider. But I think that gave me . . . [MORE]