Kahane Chai! On the 19th Anniversary of His Tragic Death 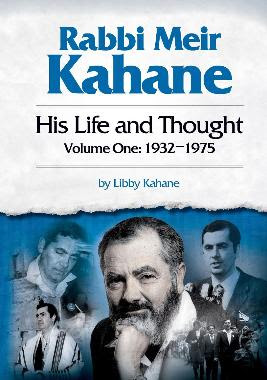 This is a beautiful tribute to H'Rav Kahane by one of his most loyal and closest supporters on the anniversary of his death, 19 years ago, at the hands of an arab terrorist who was never fully held responsible for his crime.

It is believed that the murder of Rabbi Kahane was the first Al Queda attack on US soil, but it was never fully investigated. If it had been, perhaps 9/11 would not have happened.

Since his senseless murder, his political organization, Kach, was banned by the Knesset as "racist," and named by the US state department as a "terrorist organization" even though they have never been connected to a terrorist attack of any kind.

Rabbi Kahane was not a racist. He was a pragmatist. He knew that the arabs would never be happy living "side by side" with Jews in the land of Israel. He knew they would never settle for anything less than the destruction of Israel and the Jewish people.

As I am writing this, the Israeli authorities are continuing to unpack a ship full of arms sent from Iran to Hezbullah for the purpose of attacking Israel. Hamas terrorists in Gaza are importing weapons through tunnels, and test-firing missiles that can hit Tel Aviv.

When will we learn that denying a prophet never negates the prophecy?

The author, who worked closely with Rabbi Kahane for many years, shares little known memories and insights of the dauntless, ideological MK and leader of the Kach party on the 19th anniversary of his tragic murder.

In this generation of fleeting allegiance and loyalty, particularly in the realm of Jewish leadership, it seems inexplicable that today, years after the brutal murder of Rabbi Meir Kahane, he is mourned by so many Jews throughout the world. The phrase coined so as to perpetuate his ideas as well as his memory is" Kahane tzadak"(Kahane was right [i.e.his predictions were correct]).

Having worked closely for more than two decades with this self-sacrificing Jewish leader, both in the United States and in Israel, I feel impelled, on the l9th anniversary of his murder, to relate a few little known insights about the man behind the headlines.

Although demonized by both left- and right-wing Israeli governments for his prophetic warnings concerning the rise of Arab nationalism and the dire consequences of making concessions to these implacable enemies, Rabbi Kahane remained undaunted. In his view, the Torah was the only timely and relevant 'road map' for the Jewish people.

During his election campaign for the Knesset, despite an Israeli Court decision that obliged television and newspapers to cover him as they did all other candidates, these 'democratic media outlets’ refused to do so. This compelled the Rabbi to travel to speak each day in communities throughout Israel, often returning late at night in a state of complete exhaustion. Against all odds, he was elected to the Knesset. and following his unexpected success, began to use the Knesset podium to sponsor the exact legislation upon which he based his pre-election platform. This, as we know, is an unusual phenomenon in Israel, where once elected, politicians feel they have the right to diametrically change their policy.

Rabbi Kahane believed that the only solution that could prevent a repeat of the Holocaust “final solution” in the Jewish state is the separation of Arabs and Jews.

To underscore his commitment to this belief, he announced that he would go to Um El-Fahm, a hotbed of Arab terrorists and their supporters, to suggest that they leave the Jewish State, offering them compensation for their property. This was despite the fact that Jews received nothing when they were 'transferred' from the homes in Arab lands that they had lived in for generations.

The reaction to Rabbi Kahane’s first Knesset speech in which he presented this plan was hundreds of phonecalls that I received, many of them from “closet Kahane supporters” (as he used to refer to those Jews that secretly held his views, but feared to openly express them), urging me to implore the new MK to "tone down his rhetoric and change his image", now that he was an official member of the Government of Israel.

Knowing what his answer would be, I nevertheless dutifully related their requests.
"Change my image," he replied as an amused smile crossed his face. "I worked too long and too hard to present this image. I want the citizens of Israel to know I am the same Meir Kahane they voted for."

He then travelled to Um El-Fahm to deliver his message.

A lesser known facet of the Rabbi's boundless ahavat yisrael, the overriding love and compassion for the Jewish people, was a special charity fund from which he distributed thousands of shekels to hundreds of poor and often hungry Jews who came to his door each week. Those Jews shed bitter tears at his funeral, lamenting, "Who will help us now that Rabbi Kahane is gone?" The Chassdei Meir Fund established in his memory currently enlists dedicated volunteers who continue to provide and deliver large cases of donated food to poverty stricken Jewish families.

A further tribute to the Rabbi's influence can be found today in the hearts and minds of the young courageous Jews in Israel, who make their homes in caravans on the hilltops the Land of Israel, and who, at great personal sacrifice, defend the right of Jews to settle anywhere in our G-D given homeland.

There are countless tales that deserve to be told about the life of this noble Jew, the personification of the Jewish scholar warrior in the tradition of the Biblical King David.
However, the legacy which Rabbi Meir Kahane left the Jewish people and the world are his penetrating, insightful thoughts, expressed in the many popular books he authored. Among them are: Never Again, Why Be Jewish?, Uncomfortable Questions for Comfortable Jews, Our Challenge, They Must Go.The Story of the Jewish Defense League, Forty Years, and his magnum opus, The Jewish Idea, written shortly before his murder by an Arab terrorist.

In one of the volumes he signed for me personally, is an inscription I treasure dearly:
"In every generation, there are always a few who understand; Always understand... even if you remain among the few."

Shifra Hoffman is a journalist, Founder of the VICTIMS OF ARAB TERROR INTERNATIONAL ORGANIZATION (VAT) and Executive Director of SHUVA (Return) the Israel Emergency Aliyah Movement. She can be contacted at:hoffmanshifra@gmail.com